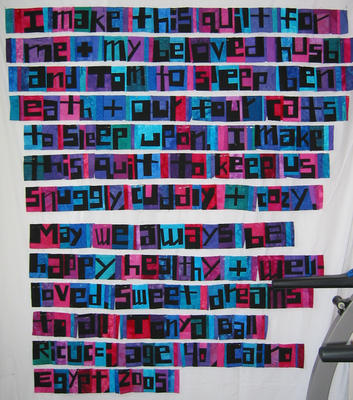 Wow, it's coming together so quickly now, I'm having a heck of a lot more fun. I've edited the whole thing down a bit more, but will have room to include my cats names. I'm kicking myself for all the extra work I did creating letters, but on the other hand if the letters weren't already made I would have taken the lazy route (surprise) and just left the kitties' names out.

All the letters are done now, with the exception of any that I might need to make the bottom line stretch from one side to the other. I can add Summer in before the year 2005. Let's hope I get finished piecing it before October and well just ignore that I started sewing in the Winter time. 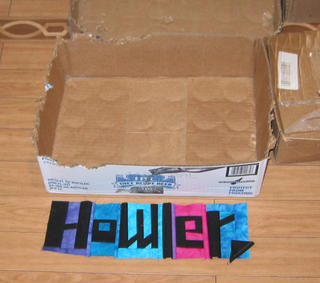 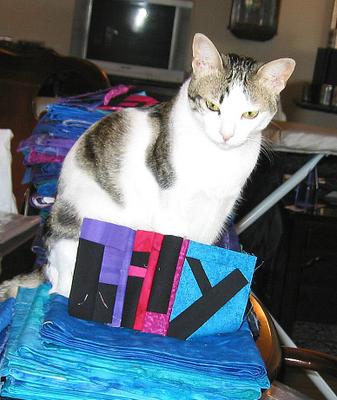 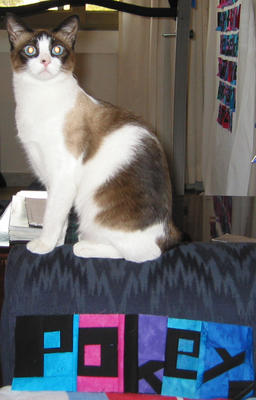 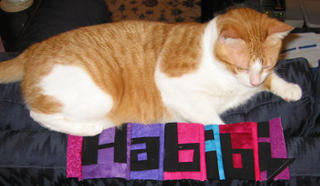 Okay, here are my darling cats. As you can see I have their names ready to go up into the quilt tomorrow. This actually isn't that bad of a picture of Howler, in that it captures his personality perfectly - he's a scaredy cat. I'd already taken all the other cats photos, cuz I knew where to find them. When I went looking for Howler, he fled and then got increasingly freaked out as I followed him around waving fabric.

Howler loves boxes - he has a selection of four of them right here. He loves to sit in boxes and he loves to tear them apart with his teeth, so we usually have little bits of cardboard strewn throughout the house.

Today I watched Woody Allen's "Love and Death," an early movie from when he was still funny. Then hours and hours of the Tour de France. Boy, did Lance put some hurting on the rest of the field today on the first alpine run. None of the guys who are supposed to be contenders could keep up with him, altho Ivan Basso isn't too far behind - if he does better tomorrow he can't be counted out, even if he couldn't keep up today.
Posted by Tonya Ricucci at 1:16 PM

This is turning out so cool. And I love the cat pics!

Oh, my gosh. Habibi looks so much like Tigger that they could be cousins!

And I am so enjoying visiting your archives and seeing the beautiful quilts that you've made. Wow.