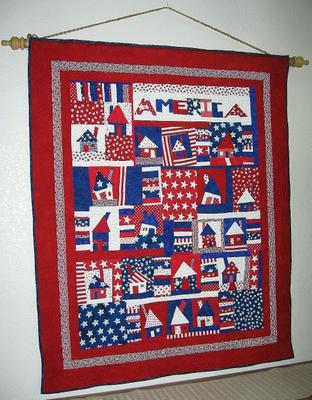 Another patriotic quilt, this one made in 2003. Yes, it's overly busy, but I like it anyway. Really showcases some Princess Mirah patriotic batiks - free form stars on a gorgeous true red and on a blue. My only regret is not buying tons more yardage.

My friend Bonnie Hunter (quiltville) machine quilted this on her longarm. It's the only one of my house quilts I haven't quilted by hand. This quilt is temporarily loaned to my parents for an unstated length of time, but probaby NOT the 20 years they are angling for.

I have been making fantastic progress on my bed quilt. I actually bailed out on going to rewatch "Batman Begins" in order to stay home and sew while I was in the groove. I finally determined the width I want for these words, which are going in the middle of the quilt. I figure they'll measure about 58" across, but that has to include blanks at both sides, cuz when I start sewing these things together it's never pretty - the ends get hacked off left and right.

Pity my poor sweet husband who likes everything symmetrical and straight and even. This quilt just took a turn for the worse for him when I decided I had to chop words in the middle (or beginning or end) and put the rest of the word on the next line. He hates when I do that, tho I quite like it, but it became something of a necessity this time. I started placing all the words and realized holy cow, this is going to be much lengthier than I want. I had to either chop up husband (so to speak) or else make that line really short. And the problem just kept recurring, cuz "beneath" is long too.

So this is vaguely what it's going to look like. Not sure how wide the strips are going to be between the lines of letters. Depending on how out of control it gets, it could be as narrow as a quarter inch or as wide as an inch. I actually went back to my original statement and started rewriting. Got rid of a bit of sappiness, kept some other sappiness... Had to figure out how many letters I still needed. Sigh. I end up with an extra k and several bs and yet still have to sew more letters. I'll see how long this gets and some words may go back in. I'm flexible.

Actually good that I stayed home today anyway - the Tour de France started earlier in the day than I was expecting. Lance is still in yellow, but why do I think it's going to be the object of the race for everyone else to gang up on him? All the other teams working together... could be scary.

I mentioned "Batman Begins" earlier. Don't think I blew it off because I don't like the movie. Au contraire, I love it. It's the best superhero movie ever made (at least that I can think of at the moment) and soooo much better than the lousy, ruinous Batman films Joel S. made and which I never managed to completely watch, and better than the Tim Burton films which were way too cartoony and clownish. This film has the right tone and an excellent look and feel to it. And it almost makes me want to watch "American Psycho" to see Christian Bale in it. Almost, but not quite.