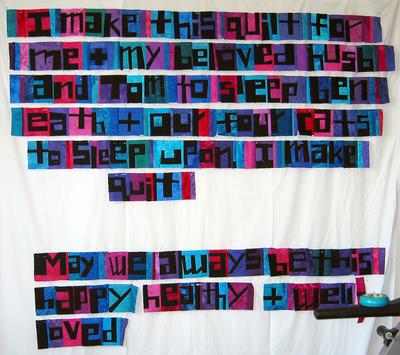 Been steadily making progress on the quilt. Now have all the letters completed (hurrah) that I think I'll need - I change my mind constantly. When I first wrote this out way back in January I wanted the repetition of "I make this quilt..." - it was going to be in here three times. But during my editing I deleted an entire sentence that started with the phrase and now I'm afraid that it looks truly goofy repeating "I make this quilt" just twice. That sentence might have to bite it as well. Or be modified to remove the beginning of the sentence. sigh.

Words are going to come together pretty fast now since the hard part is finished. I've started sewing together the words I know I need for sure and they're not all up on the sheet. They'll make it in as I get further down.

Last night I started on my "Gilmore Girls" season one dvd but discovered it's not a good program to quilt to since the dialogue is fast and furious. "Moonlighting" on the other hand works great, partly cuz I've seen them before way back when they were first shown. It has snappy dialogue but a lot of it is just funny and not necessary to follow the plot.

I'm unfortunately having knee problems - it's a long-term problem that flares up once in awhile. That means I didn't walk on the treadmill this morning and I've had to take icing breaks throughout the day. By the way, that's the arm of the treadmill that's intruding into the picture.
Posted by Tonya Ricucci at 12:12 PM

I love watching the words evolve! It's looking great Ton....looking forward to more peeks as you progress!