I guess the blogger powers-that-be decided I could have a blog after all. I was pretty thoroughly disgusted with the whole thing when I couldn't get photos to upload and was considering giving up before I'd even really gotten started. 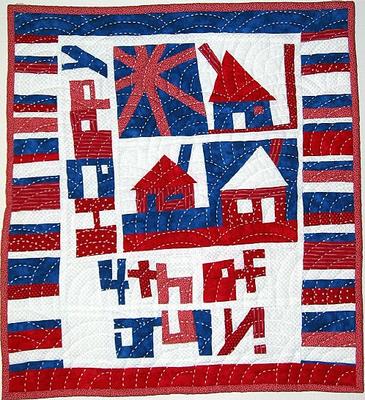 One of the quilts I put in here days ago, but a better photo of it. Finally downloaded Picasa2 and played with the photo to make it look better, and boy does it ever. I'm just so overjoyed at being able to post pictures again, figured I'd better do it while I could.

Here's how the current project looked on 5 July. I've been making steady progress every day, about 20 letters when I've been making letters. One whole day (sewing part of the day) seemed wasted as I cut strips rectangles ready made to slap on the ends of the words. It is actually more efficient that way in the long run, just boring at the time. I'm making progress and that's what thrills me.

This is a photo of the most adorable cat in the world, my sweet Pokey, participating in the making of my quilt.

Just finished the book "Sabriel" by Garth Nix. It's theoretically written for young adults, but this is the second time I've read it and found it utterly delightful. A young woman has to go over the wall into a land where magic works and the dead rise, in order to save her father. Not sure I have that punctuated correctly. The dead are definitely NOT rising to save dad.

Yesterday I spent too much time watching the news of the bombs in London, but didn't overdose on it and make myself thoroughly depressed. Instead I've been concentrating on the Tour de Lance and making this quilt. Actually picked up a beading project as well, but that's a whole different story.

Posted by Tonya Ricucci at 1:57 PM