Yes, I admit it. Bad blogger, bad. Sorry for the unannounced blog break, but I just wasn't feeling it. I've been sewing and working on secret projects - stuff that I can't share right now.  You'll see little hints here and there but that's it.

I've been playing with some of the fabric that The Orlando Modern Quilt Guild gifted me (I squealed when I opened the bag and found eyeballs): 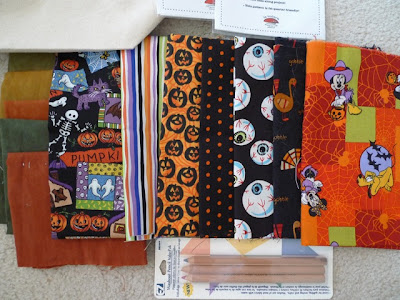 The guild gave me a gift for the kitties too: a compressed catnip ball. Just like little kids, they had fun with the packaging: 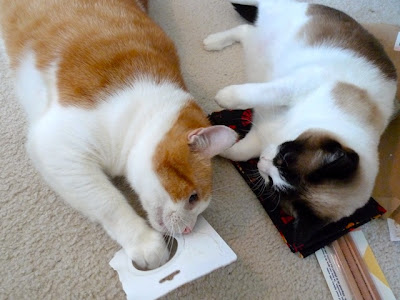 Here's something new to show you. I discovered artist Len Peralta and had him create the UnRuly Quilter with Scissors (as shown with Pokey): 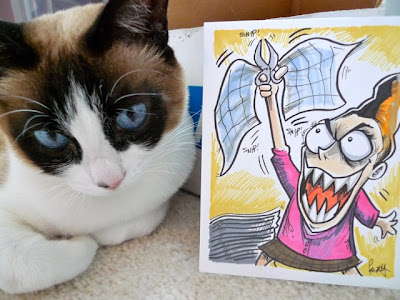 I got it through the Monster by Mail project. I've never worn a miniskirt in my life but the teeth are accurate. hee hee hee. You can see more monsters here including a couple of knitting zombies. So far I'm the only quilter!

Here's a teaser. Gwen Marston is really excited about this: 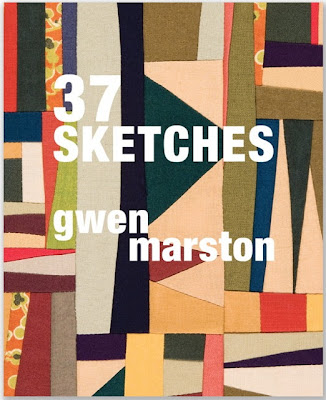 I'll tell you more when there's more to know.

I continue to handquilt LAWS. I'm getting closer to done but I'm really bummed out that a couple of the hand-dyes (purchased way back in the 90's) are ALREADY bleeding onto adjoining fabric. I think I might have to boil (okay, just wash with really hot water) this quilt with Synthrapol when it's finished. Anyone ever try that?

One thing I'm not working on? Anything for the Text and Textiles exhibition that I mentioned in the last blog post. Just not enough time. I hope some of ya'all are doing it though.

Obsessing about Doctor Who. I've watched and rewatched a number of episodes and had to hunt down and read theories on what the heck is going on. All so cool. woohoo! I was pretty sure of who River was, but totally nailed it at the beginning of "A Good Man Goes to War." I want a spin-off of the Silurian Detective Agency in 1880's England.

If you're sure you wouldn't like Doctor Who but are willing to give it a try (that was me back in January) watch the episode "Blink" and then decide if you're intrigued enough to watch more. Fabulous episode and it's a stand alone.

Ya'all take care and I'll try to be better about posting. I leave you with a photo of Bibi investigating: 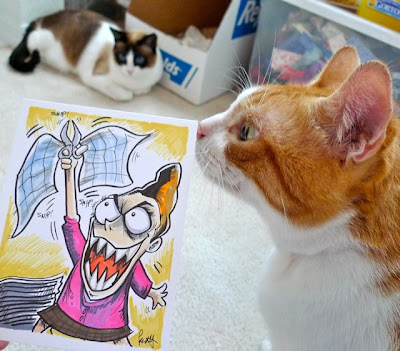