The incredibly talented Lynne of The Patchery Menagerie and I had a swap. So I am the lucky recipient of this The Rules for Tonya: It's a quote from Katharine Hepburn: If you obey all the rules you miss all the fun. Isn't that a perfect quote for liberated unruly quilters?
The letters are 4 1/2 inches high which gave Lynne more room to play. Check out the cats: 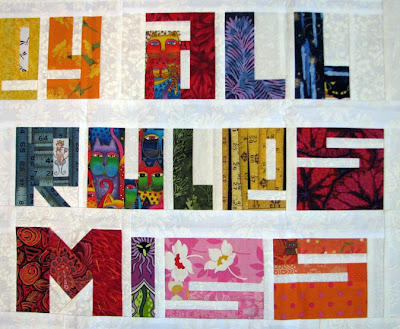 She found a way to represent each of my four cats. Lily and Pokey: 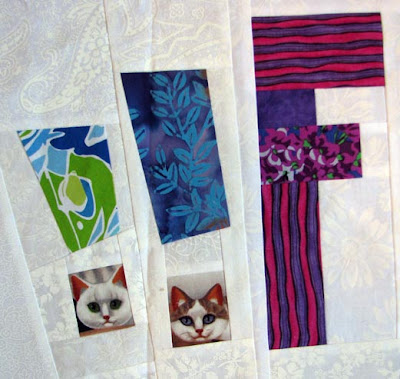 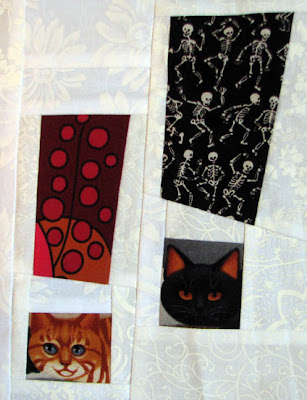 Love the skeletons. Perfect for a quilt for me.
This all started when Lynne sent me photos of a secret swap project she was working on for Helen of Patchy Work of Mini Grey. (fun blog - well worth a look)
This is Helen's Obey the Rules. And check out this post in which Lynne describes drawing the letters on graph paper and then playing to get just the look that she wanted. She has a more controlled way of approaching UnRuly Letters - I always enjoy seeing different ways of doing them. Anyway, Lynne describes making my version of the quilt here.
In exchange, I sent Lynne a quilt top made with extra L-O-V-E letters I made in Paris while I was sewing my Rumspringa quilts. A couple of I's snuck in there as well - I made those for LIVE when Pokey was so sick last year. Lynne asked for a quilt that was very "me" and this certainly qualifies. 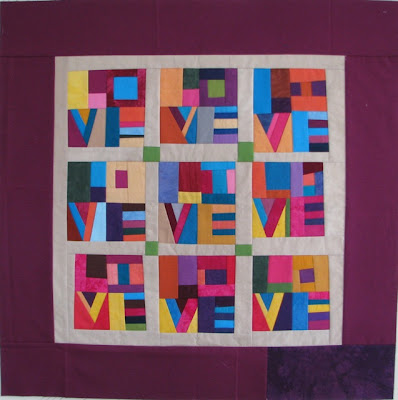 Speaking of Pokey, I know I'll hear about it if there isn't a kitty photo in this post, so here you go: 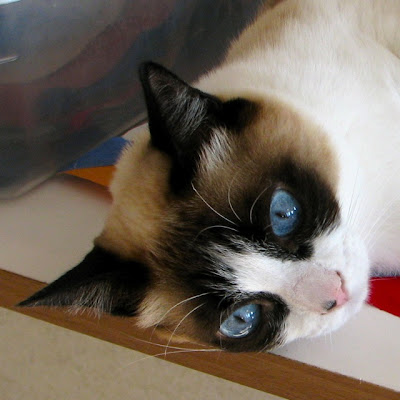 Hi guys. I have been making very slow progress on the Love Anna Williams quilt. I've made a bit more progress from when this photo was taken. 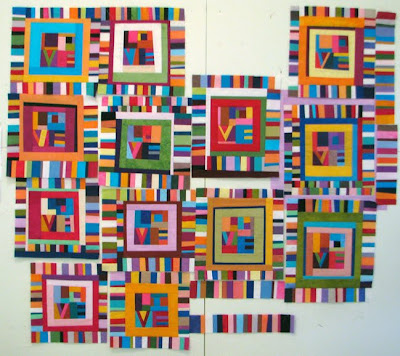 I like this photo better, just because you can see Lily: 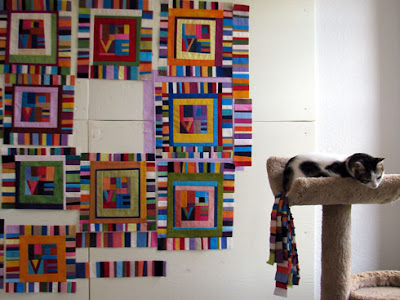 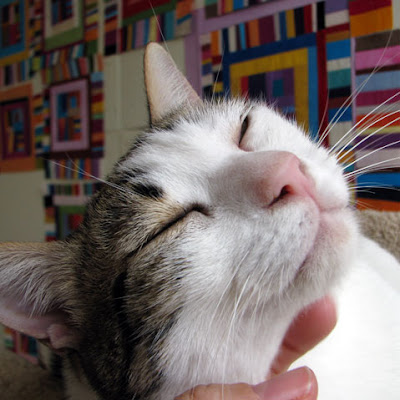 I need to actually sit at the machine and SEW. I've been distracted by a new toy. Here's a hint: 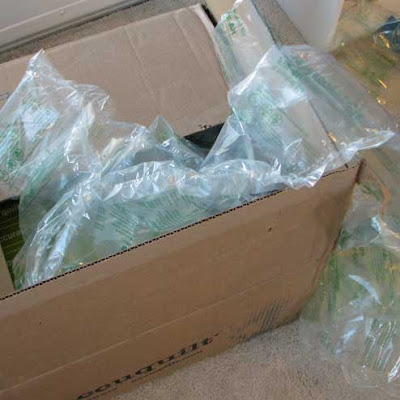 Of course the cats just think the box is the new toy. Howler in particular loves those air pocket things.

I do keep getting distracted, starting and switching to different projects. gack.

It's bad when you get behind in blog posting - it almost becomes overwhelming because there are soooo many things to talk about. So I need to just get this done and do more follow-ups. Some things just need their own post!

ya'all take care
Posted by Tonya Ricucci at 8:52 AM 22 comments:

Right now I'm hand quilting my Plaid One Patch with Strings (I completed the top almost 2 years ago). It is so wonderful quilting through those recycled shirt fabrics, which are so soft. That made me go out on a buying expedition to Goodwill. These are all shirts except for the fabulous pink and green plaid shorts: 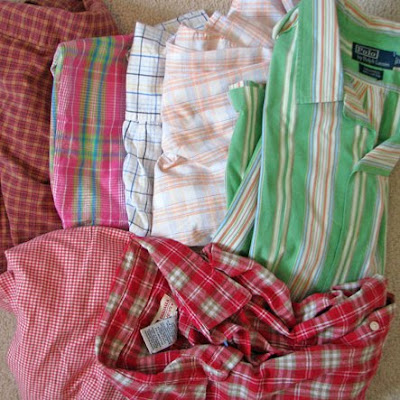 Yesterday I was "forced" to buy some Moda handwovens that are luxuriously soft. And my quilt guild had a "garage sale" and I found some great plaids that way too: 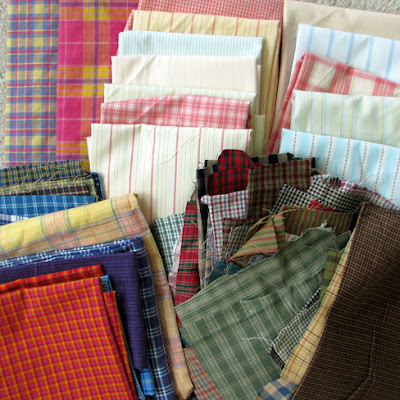 The formerly-owned fabrics were mostly darks, but I did get some of this fabulous pink, orange and yellow. I think that's a Piece O'Cake from years ago, which I loved when it came out but that was in the days when I (oh so foolishly) refused to buy orange or yellow fabric unless it was for Halloween. My how times have changed.

I've been disappointed in my tv viewing this week. The most recent Fringe and Lost episodes were merely "meh" verging on "bleah."

Has anyone else been watching "9 by Design" on Bravo? When the show focuses on the couple, who gut and redo homes in Manhattan, I love it. They have a great design esthetic. But all the stuff about their seven (yes seven eeek) kid? gack, that I fast forward through.

Pokey continues to overgroom herself, but I'd rather have her happy than furry - I've given up trying to get her to stop. At least for now. I'll just try to play with her more and give her extra lovings (as if that's even possible) and see if that helps. 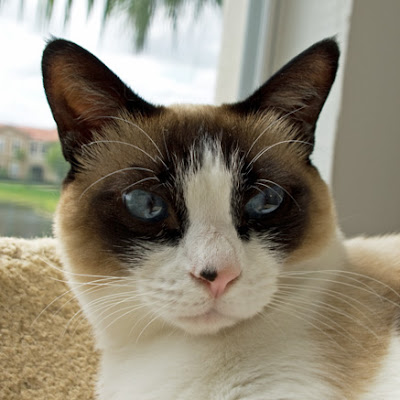 You know how I mentioned that Pokey is doing really well? A happy little camper? Well the blood work came back and she has "phenomenally improved." Woohoo! 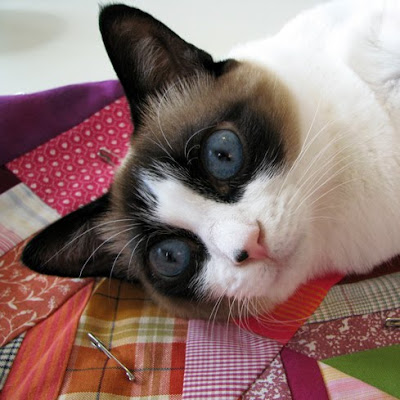 She's not 100%, but she's better. The vet actually thinks that she might have passed one or more of the kidney stones that were collected in her undersized kidneys. She has to stay on the same meds, eat the special diet and get her sub-Q fluids, but so wonderful to know that something is working.

The bad news is that the little stinker is doing an obsessive-compulsive grooming thing. She's got a bald strip on her leg that I've been putting super stinky stuff on, but not sure that's helping. Furthermore, I think she might have started a new bald patch on the other leg. Gack. Furthermore, she's now way too jittery and running anytime she thinks I might scoop her up to put the stinky stuff on. Which probably adds to her nervous state which feeds the obsessive grooming...

Slither Eek Boo will look much better longarm machine quilted by Natalie instead of my freehand fans hand quilting (which really wasn't adding anything to it), so I've started ripping all my work out. I've already put so much time into it, but still had soooo much more to do that in the end it wasn't that hard of a decision.

It's been making me cranky not having a quilt that I really wanted to hand quilt on. So I got an old unfinished top out and put a border on it. Anyone with a good memory know which quilt this is? 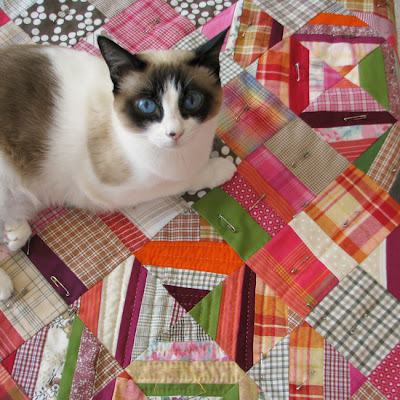 Ever since see Silly Boo Dilly's quilting with the Sulky Blendables 12 wt thread I have wanted to try it. This quilt is the perfect opportunity. I wanted something thicker than regular quilting thread, yet more colorful and not so thick as perle cotton size 8. 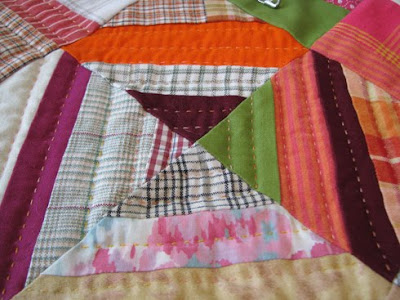 I love it. I picked Sunset which goes from yellow to orange - but isn't too high contrast. I'm using a size 8 Between needle and taking bigger stitches than I usually do. Love how it looks and the quilting goes faster that way. I'm going to try doubling the thread and see how that goes.

I spent much of yesterday hand quilting and it felt so soothing. I really needed it back in my life again.
Posted by Tonya Ricucci at 9:00 AM 34 comments:

Woohoo, I'm back in the groove and sewing again. It feels wonderful to finally have my brain clicking again. This is my Love Anna Williams quilt so far. This is generally how I think the blocks will be arranged. 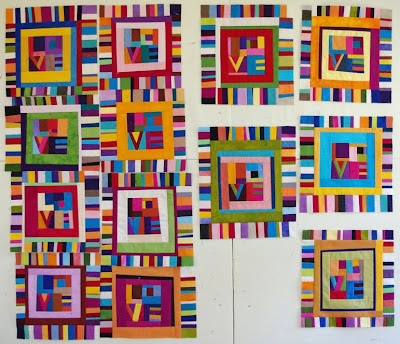 Here's a close-up of a block: 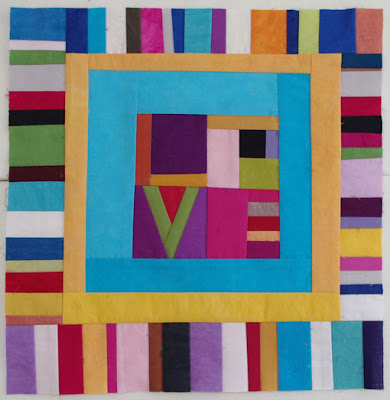 This block was inspired by the one Anna Williams used in her quilt "Many Windows" (the link takes you to my blog post from when I first started the blocks, not so many blog posts back since I've been such a bad blogger. A photo of Anna's quilt appears in one of the photos. I've spent well over an hour looking for that specific Anna Williams quilt online, to no avail.)

Her blocks have more "borders" than this. Each rectangle is surrounded by log cabinesque strips, then a frame of the piano keys, a border of strips, then more piano keys. All very improvisational so that each looks different and some are missing some of those layers. Very fabulous.

Right now I really love how my blocks look. I'm almost afraid of adding more and more and more - will it get too busy? (I know, I know, for some of you this is already too busy. I mean "too busy for me.")

I have to decide how big I want this quilt to get. I'm planning on handquilting it and eventually it will hang on a wall so the maximum size is 72" square (that's a size that works well for me). But eek, that's big. So closer to 50" would make me happier.

I really love the odd number of blocks but it would make things easier if I "lost" one of them and just used twelve.

In the past I've made quilts a certain size, opting for the easiest path and ignoring what the quilt is trying to tell me about what it wants to be when it grows up. And then I'm not happy with the results cuz it's not all that great (or even good) of a quilt.

I don't have to make any decisions yet. I need to make more stinking piano keys - I'll need lots more of them for auditions. I know that any leftovers will easily go into a fun quilt, I'm just not thrilled about this stage.

In a couple of quick tv notes, anyone else see "Brown Betty" - the most recent episode of "Fringe?" I loved it. Walter tells a story and the visuals are just amazing. A mix of film noir detective and tech. (I'd call it "steampunk" except that seems to be limited to Victorian times.) I loved it. Somebody make a series like this (although it will undoubtedly get cancelled too soon, just like my beloved "Pushing Daisies.")

Besides how wonderful it looked, I got really emotionally involved with the story. Definitely one of Fringe's best episodes ever. I could have done without the singing bits of the show, except for Story Walter's chorus in his lab - loved them.

Oh and "Chuck" - it's fabulous. I wasn't thrilled with the season at the beginning and didn't like Chuck's new abilities, but it finally got it's groove together (esp after losing the horrible wooden Shaw). Loved the Honeymooners episode. Why not have a great couple? Chuck and Sarah (The Charlesesses) can be to spies what Nick and Nora Charles were to sleuths. I am sooo thrilled to have a show that doesn't stick with the "will they/won't they" until I am long past caring.