I have some Show and Tell. I've been playing the last week and a half with a pile of L-O-V-E (and sometimes I) blocks. Take a look at the little top I made for Lynne of Patchery Menagerie. That started me off and all I wanted to do was keep playing with these blocks.

They actually look really cool - must play with Bars sometime... I didn't want to spend time making a lot more letter blocks, so I just made thirteen unruly 4-Patches: 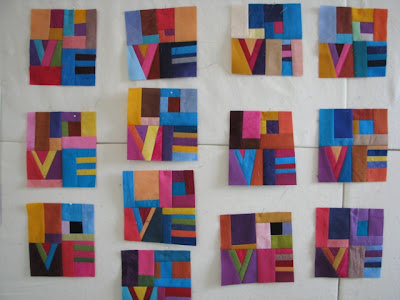 I'm really excited about one of Anna William's amazing quilts. It's been in my inspiration folder for ages and I finally decided now is the time to play with it, using my LOVE blocks as the centers: 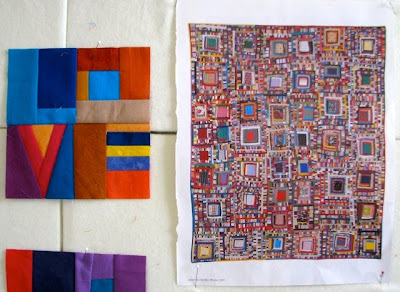 This is as far as I've gotten: 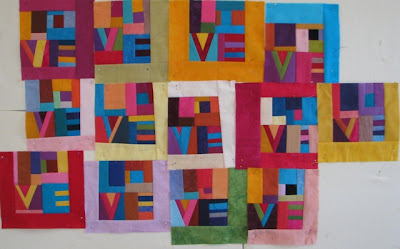 That looks kinda cool too. Maybe sometime I'll come back to this idea.

I have been struggling to stay focused lately. I made some more cat blocks and just couldn't keep going with it. I WILL do a tutorial, just not as soon as I thought. Need to be a bit more energetic first.

I've been battling my knee, the one I've had problems with for ages. I've been putting off going to the orthopedist but it's finally at the point where I just have to make the appointment.

I have been working on something else: copyediting the Letters book. I have three stacks: one pile of papers with just the words and one with my illustrations (with modifications), and a bunch o' photos. Still doesn't look like a book yet, but definitely progressing.

This tiny creature has been doing well: 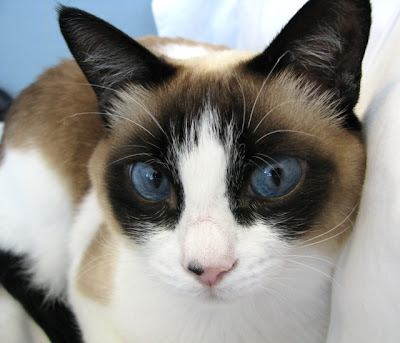 It was a year ago that Pokey first became ill with what we later learned was a symptom caused by Chronic Renal Failure (CRF). I did so much crying last April - I was completely convinced we were going to lose her. Instead she's doing really well. She still has CRF - she'll never be healthy - but she's doing great under the circumstances. She's put on some weight and has been lively and happy. For a while there she was groggy and miserable when I brought her back from the vet's with her 6-days worth of subcutaneous fluids, but no longer.

I don't know if it's been the surprisingly cooler than expected temperatures, but Pokey has been in cuddle  mode sleeping on me and wanting her belly rubbed. Ah, that's wonderful. Wonderful for me, not so wonderful for getting things done. Everything else can wait.
Posted by Tonya Ricucci at 10:24 AM

Email ThisBlogThis!Share to TwitterShare to FacebookShare to Pinterest
Labels: Cats, my quilts

The LOVE blocks look fantastic . . very inspiring! Glad the wee kitties are all doing well too. The orthopaedic doc should be able to do something for your poor knee. Hope you feel better soon.

You have to love a face like hers! And for those people who think cats don't have real personalities of their own, well they must never have had a kitty love them back.
~Barbara in NC~

I L-O-V-E the love patches and the love quilt for Lynne (lucky girl!)and L-O-V-E the new look of your bolg...simple and very nice!
nichi

Enjoy your little cat, she is absolutely adorable.

I can see why Anna Williams' quilt inspires you. It is amazing. Great idea for your LOVE blocks.
Pokey looks very bright eyed and content. I'm so happy she continues to warm your life. Such a sweetie.

It is very interesting to me to see how other quilters work and try things. I like the rows but did you realize that some of the O's look like I's? Actually that is sort of cool, live and love. My husband had bad knees too and like you won't go to the doctor. Unfortunately we live in a 2 story house and the steps give him a fit.

The LIVVE line is awesome!

I love that love block! I put it in my inspiration folder!

I can see why that quilt has been an inspiration to you for years! And Pokey is pretty inspirational too.

I love it! I am very excited, and I think Pokey is just the prettiest cat I have ever seen (but don't tell Millie)

You know I really like it when you had all the letters sorted by kind. That was interesting looking...and kisses to your kitty!

What a beautiful kitty. My old Roxy had a kidney problem- we did subcutaneous fluids at home for 4 1/2 years....and she did very well. I hope your kitty does well.

What fun to see you playing with your letter blocks!!

Great news re your book ... you will be SO incredibly relieved/happy/proud/exhausted/overjoyed/etc. when you finally hold a copy of the "real deal" in your hands!

Your posts are always so full of whats going on. Love the love,live blocks. I like the inspiration quilt--only don't lose the words in the quilt.
Of course, Pokey is indeed one of the world's most beautiful kitties. I am glad that you will have more happy days with her.
Keep at the editing. It really is work to create a book. Once it is finished it looks like it was easy, but you know what you put into it. However, I hope it is not cutting into your TV time.
Lastly thanks for the tip on blogging. I think for now I will leave it alone. I have already posted so many blocks and so many of the quilters are not very computer literate. My next project to share will definitely have its own site.

That is just fantastic! I love the colours too.
I'm glad Pokey's OK.

That is going to turn out to be great. I love the blocks

I LOVE your love blocks! Glad to hear Pokey is doing so well, she is gorgeous as always.

Hooray for Pokey. What a blessing that she is doing so well. She is such a pretty kitty.

I'm so glad to hear your Pokey report. She is such a pretty girl. I mentioned our Siamese cat Cleo who arrived with her nearly fatal liver problems when she came to live with us in 1992. After nursing her back to health she lived to age 20. She just passed away last September. I think the power of LOVE is a wonderful and healing thing. Wishing you and your knee well!!!

I love your love squares.

I also LOVE Pokey and know you are so happy she is doing better. I am so thankful also!

You have a wonderful style!

It's so nice to hear that Pokey's doing well. Perhaps she'll have a pretty wonderful full life after all. :-)

The love blocks look great too. I like your inspiration. All you need now is lots of teeny tiny unruly squares to surround the love with. If the cats allow, of course!

Oh! I love your work! So colorful and fun :o)

That is a lot on your plate. Wow. Hang in there with the knee, I certainly feel your pain these days.

PS Love the layout of the top photo!

The colors in this piece are spectacular, Tonya! And the book may be a lot of work, but how satisfying will it be to finally see it in print?!!

I really like your blocks....love those multi-colored letters! They're still surprisingly easy to read. Your quilt is going to be so colorful...so you!

I'm so glad to hear that Pokey is doing so well. I know last year was really rough on you. And how wonderful that she's in cuddle mode. My beasties are in that mode right now too. Work can just wait a little!

Good luck on the book editing! I'm sure it's a lot of work.

And don't wait too long to get to the Doc....you don't want too much damage there to deal with.