Thank you all so much for your kind words and encouragement on the last post. I am plugging away at the book. A pic of red and white fabric, along with little Pokey toes. A commenter asked about this fabric - it's the Ruby colorway from FreeSpirit's Bellbottom line. 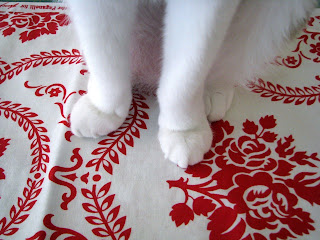 On the topic of red and white fabric, both Kristin and Wanda sent me scraps. Woohoo, so much fun to have early 80's pindots and hearts. Thanks, guys!
My friend Bonnie uses what I call the Garbage Can Method for her utility quilts. Another name for it would be Everything But the Kitchen Sink but I like my name better. Whatever fabric she's got, she'll use no matter how ugly. (Poor quality is a different matter...)
Even when Bonnie's doing a more controlled quilt, she's still really loose about choosing fabric. I loved this post she wrote about picking reds for her Christmas mystery quilt.
I've just been able to loosen up this year and use everything in a quilt (my Hope quilts). And this is my "Garbage Can" Christmas tree. Usually I try to put the red and white ornaments on a different tree and I was so happy a few years ago to only have the bright wild stuff on a tree. Well this year it all happily goes on one tree and that includes the disco balls.
Not that I can seem to get a good photo of it. (I'd try to get another photo but it's raining like crazy out in the world today.) Christmas tree and palm fronds, ah, we're back in Florida: 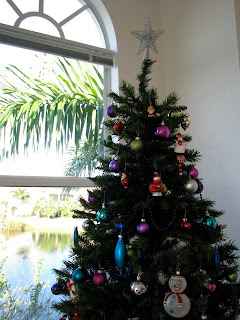 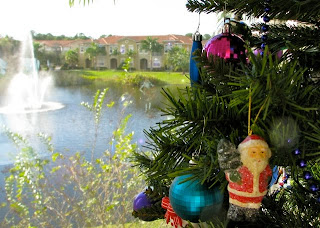 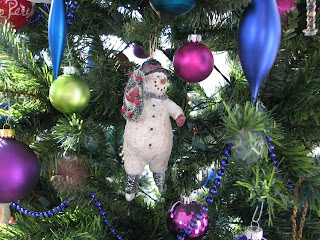 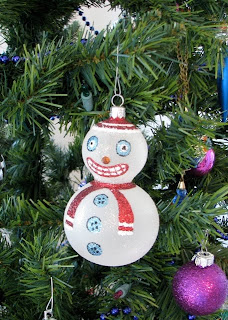 Reminders of places we've lived, such as Paris: 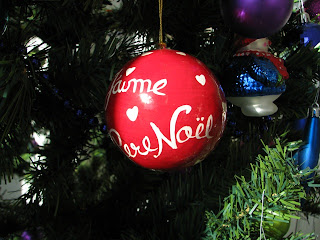 and Cairo. Okay, this eyeball isn't really an ornament but I think it's a hoot to have it here - it gives this tree extra personality and I suspect these eyes can't be found on many other christmas trees. 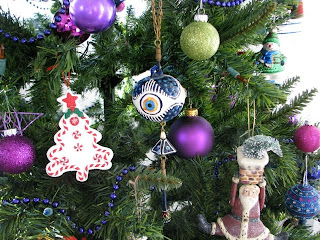 Also part of my Christmas display is the phrenology head I bought in London and the Egyptian glass-marble lampshades that look like xmas trees to me. 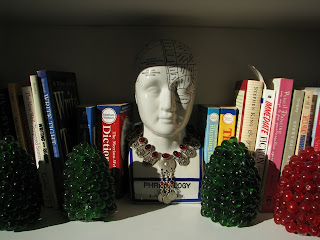 In an abrupt change of topic, Howler was at the vet's this week, poor guy. He freaks out (and has to be gassed for the examination) so it's a horrible experience all around and we put it off longer than we should. Howler managed to bite the vet tech with two of his five remaining teeth. Apparently he moves faster than anyone at the office had ever seen such a fat cat (he weighed in at 22.9 lb) move before. Howler is the black cat, here pictured with his brother Habibi: 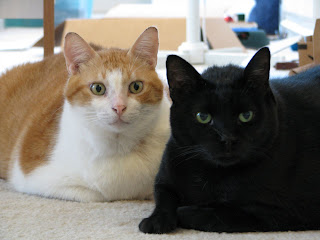 Howler had a bladder stone, a urinary tract infection, and a bunch of other nasty conditions. We just hadn't caught on that was the reason for him peeing on furniture and we now feel guilty for not getting this taken care of earlier. But as I explained above, it's always a trauma.
Anyway, he underwent surgery to remove the stone and is back out of the hospital. He's happy to be home, loving, sweet and very mellow from the valium he's on. He goes back in two weeks for staple removal and a good teeth cleaning, which he desperately needs. I feel sorry for him but the good news is that he hopefully won't be going in all the wrong places.
I haven't talked about tv in forever so here's a quickie update on what I'm watching (or not).
Top Chef: Las Vegas is enjoyable - I was sure from the very beginning that the final four would be the ones who did actually make it. No spoilers here, but I was very sad to see the fourth one go home. Have to wonder how much was based on food and how much on the personalities that the producers wanted in the second half of the finale.
White Collar? Bleck. I was really hoping for something more intellectual - the FBI pursuing white collar criminals, not hostage takers.
I'd be watching last season's Lost and Chuck if they were just out on DVD. I'm so excited both are coming back soon. I really loved the first season of Chuck - what a fun show.
I'm all caught up on Fringe (except last night's), which is loads of fun. So happy to have a show that doesn't feature lawyers, doctors or cops. Okay, they are FBI but X-Files FBI not regular real FBI. Excellent acting and I'm enjoying the writing although I sometimes wonder what the heck they're doing. Did faux Charlie really have to get discovered that quickly?
Also caught up with 30 Rock - still loving me some Tina Fey and Alec Baldwin - and The Office, which has been rather depressing of late. I almost wet myself watching this bit from last year:

It's all geekness from here...
I think it's good news that Dollhouse has essentially been cancelled - I have all of this season's episodes recorded but can't work up enough enthusiasm to watch.
I watched Terminator: The Sarah Connor Chronicles season two and am sad that show got cancelled (should have been Dollhouse!). No, I didn't like everything that happened in the season (way too many terminators showing up and they were all way too easy to kill) but still want to know what happens next.
In November, I read a headline about Joss Whedon wanting to buy the Terminator franchise and I was all excited - I'd LOVE to see what he would do with it. Of course it was all a joke. Sigh. Hopefully once he's through with Dollhouse he can work on a great project, instead of a mediocre one. Sorry, I really don't think Dollhouse is worthy.
That's it, I gotta get back to work now. Ya'all take care.
Posted by Tonya Ricucci at 2:55 PM 23 comments: