DAM, DAM, DAM quilts.
DAM Quilts = Denver Art Museum Quilts. But I'm having a Bart Simpson moment and totally reveling in writing something that is accurate, but when spelled differently might be seen as not so nice.

The museum supports quilts as art. They've had previous shows of Amish, Mennonite and Gee's Bend quilts so it's worth checking them out if you're in the area. I think the quilts in these photos were part of their permanent collection. I got some good pics for you (try clicking to see larger). Here we go:

My Aunt Janet with the Princess Feather Quilt, made in 1860 by Martha Jane Cary Gray, probably in Ohio: 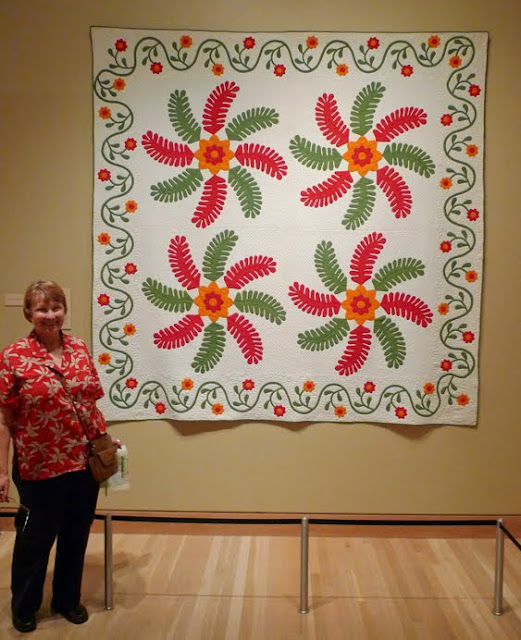 The quilt looked like it had barely been used, let alone washed. Can you see the beautiful hand quilting? 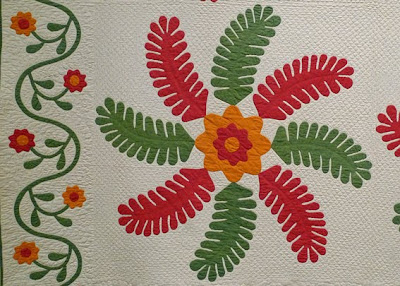 My favorite thing about the quilting, besides the fact that it's gorgeous, is how imperfect it is. Seriously. Look at how the diagonal lines take a noticeable turn at the seam line: 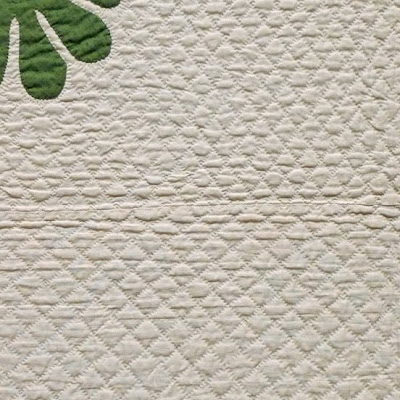 Why do I point this out? Because I'm always telling folks that they stress too much as they do the freehand fans, worrying about what EACH one looks like, rather than the overall effect.

Here's a shot of several of the quilts: 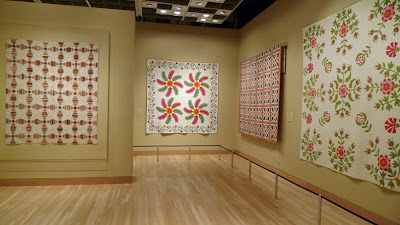 I liked the Pineapple quilt shown on the left. Here's a close-up so you can see the shirting fabric: 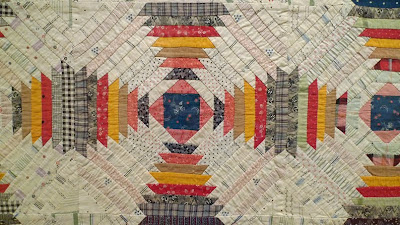 I liked this next quilt the best (but I wasn't smart enough to get any of the details about it): 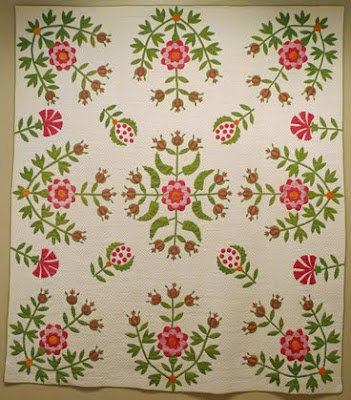 I LOVE the shape of this flower and look at how lovely and softly faded the colors are. I don't know if you can see it but every bit of fabric is appliqued down with a herringbone stitch: 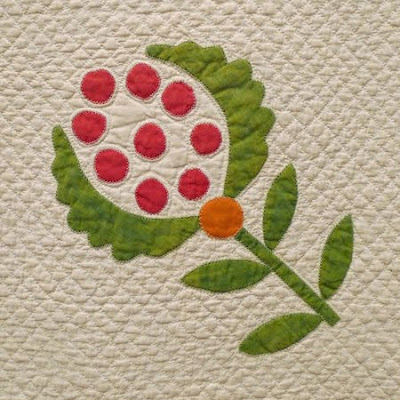 Gwen Marston always recommends NOT cutting away the fabric underneath your appliques. Looking at how this quilt has held together despite the wear, you can see why (look at the pink fabric in the center): 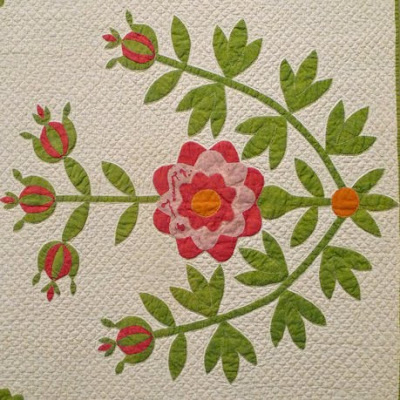 I love this patriotic quilt, but it wasn't as easy to photograph under glass. Look at how the top and bottom rows are turned differently than the middle ones - seems like a really unusual choice to me, rather than making the top half face a different way than the bottom for examp 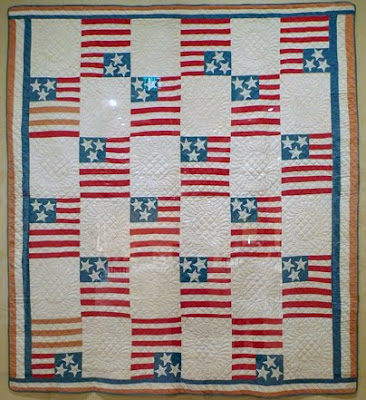 I had a great visit this last week with V (of Bumble Beans Inc and 15 Minutes Play): 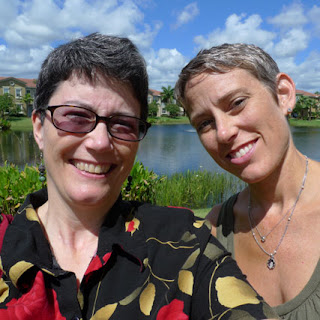 We did a bit of hand quilting and talked a bunch. We ate out at one of my favorite restaurants: Seasons 52, which focuses on healthy, fresh food. We sat at a table overlooking the Intercoastal Waterway at dusk and it wasn't humid and not too hot. Very lovely, until the next day when I realized I was covered in mosquito bites. No kidding, I stopped counting after I hit the 23rd bite on just one leg. Eek. I was obviously attracting all the mosquitos in the area - V came out unscathed!

V did a bit of sewing, playing with my Halloween novelty prints. Even better, she enjoyed it!

I admit I have been completely sucked into Halloween fabric this year. V contributed to my stash with this really funny Edward Goreyesque orange print and the great lime green spider print: 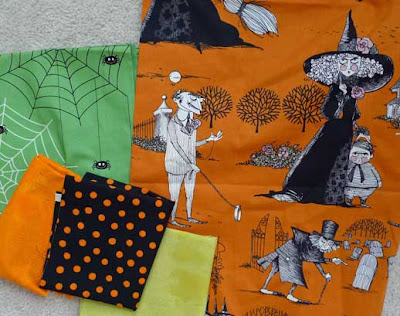 Which added to the fabric I bought in Lyons, Colorado at Quilting Hands. The owner said she'd bought something like 150(??? - did I really hear that right?) Halloween prints this year. Not only that, but she had three books by Gwen Marston - my kinda shop. My favorite is the hearse print, which has a casket falling out the back. Doesn't it look like Mr Munster should be driving? 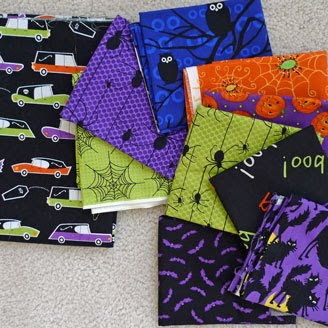 okay, and I'd already bought some Halloween fabric at a couple of local shops, one during their special Christmas in July celebration (and no, I didn't buy any Christmas fabric): 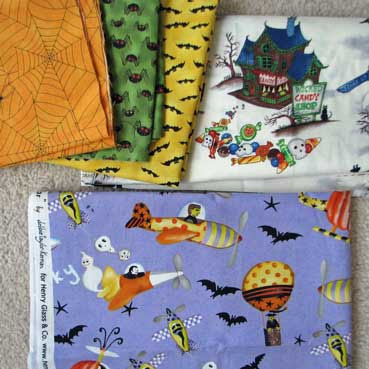 A few quick words about tv and then you can have your Pokey pictures. I am so completely and totally loving the new season of Eureka on Syfy. Well, maybe not completely. I do have a quibble with the actor who's joined this year and his "American" accent - why couldn't they just have let him be British? Anyway, Eureka is a wonderful sci-fi romp that has a lot of emotional depth. Love it, love it, love it and woohoo it's been renewed for another season. Even if you haven't watched before, try it.
I surprised myself by enjoying The Glades on A&E as much as I have. I'm so burned out on cop procedurals, but the cast has great chemistry and it isn't too intense. Fun. As compared to the horrible Rizolli and Isles. Hated it. Had to fast forward through the beginning of the episode (never ever want to see the victims' last moments) and couldn't even make it through the second episode (hmm, this whole plotline happened last year on The Closer). Speaking of which, The Closer continues to be uneven, but had an excellent episode this month. All I need to say is: Provenza and Flynn. Woohoo.
Covert Affairs? Watchable in a geeky way, but it's no Alias.
Ack, Pokey is nipping at me to get attention. So here are your Pokey pictures: 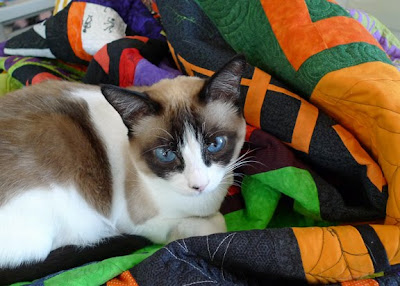 this was of course while I was trying to sew the binding on Slither Eek Boo (which I don't actually have a photo of. ridiculous, isn't it) 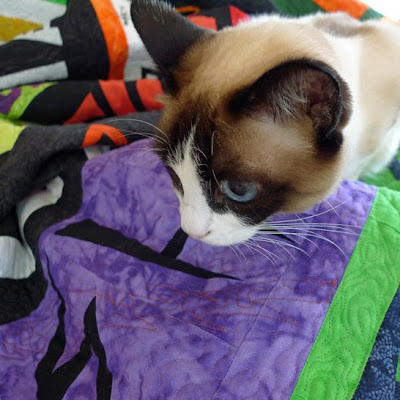 Taping The Quilt Show with Alex Anderson and Ricky Tims was an adventure. 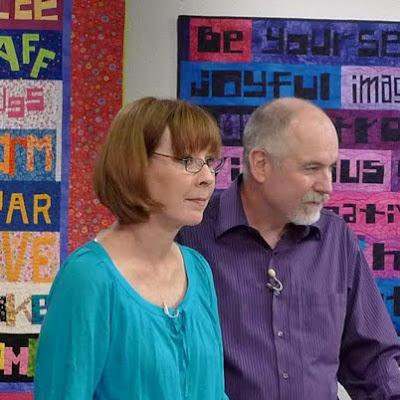 I was so nervous beforehand, despite reassurances from fabulous producer Shelly and "Cruise Director" Lilo that it was all going to be fine. Sure, maybe for other quilters, but not me - I'm not prepared enough, I'm shy, I'm nervous...

The show is taped before a classic "live studio audience." Two shows are taped in one day and here's a secret: it's the same audience for both. They have them change shirts and sit in different seats. This is what it looks like empty. 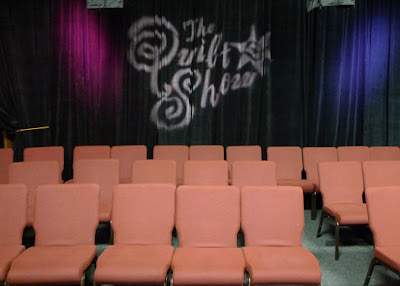 My aunt Janet and I got to go to the studio the day before my taping to drop off some of my quilts and to watch a couple of hours of someone else being tortured. (Janet and I sat in directors chairs off to the side.) The guest turned out to be surfer dude Rob Appel. He was so relaxed and casual - made it look easy. Plus, they did some retakes so I knew that if I screwed up I could do it again - whew, that's a relief.

I was amazed to see they don't use cue cards at all. So whatever intros Ricky and Alex do, they have to remember them. It did make for some funny bloopers - I'd love to see that reel sometime. Alex would get frustrated with herself and say something like "C'mon, Alex, you're a professional, not Ricky Tims." Which made everyone laugh and relax.

It's a mad house behind the scenes because they don't have much room to work in. Quilts for the next day's two shows are placed on shelves in the prep area. I wasn't smart enough to photograph my own shelf, but look who was taping the day after me: 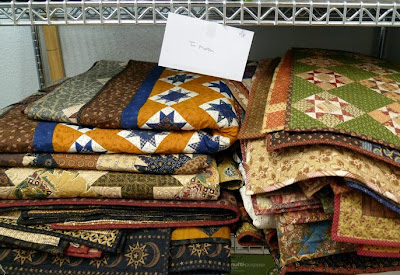 Jo Morton. I know some of you are big fans - her show will appear the same season as mine - in 2011 - as will everyone else who taped during this week. I think.

The quilts are later laid out on a table so that they can relax during the night. Once again, I didn't get a photo of my quilts, but these are Lola Jenkins' who was taping in the afternoon: 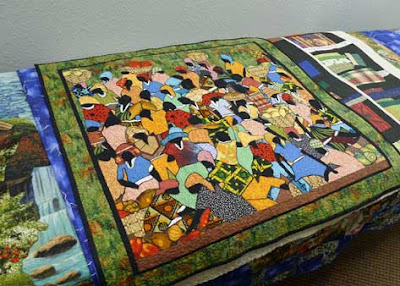 She was a hoot - I'm sure her taping went well.

So Janet and I arrived at the studio a bit more than an hour before taping. I then worked with the TQS folk to figure out which quilts were going up on the walls. And let me tell you - there isn't much room. It was much smaller than I had realized when watching the show.

This is setting up in the morning. In this photo you can see Alex on the left in the "bistro area" preparing the demo she was going to do in the episode. Ricky is at the Bernina sewing machine (thank you, Bernina, for sponsoring TQS) while a cameraman shoots a closeup. There is a flat screen monitor on the right where everyone can see what the camera is shooting. There are actually four cameras on the set. 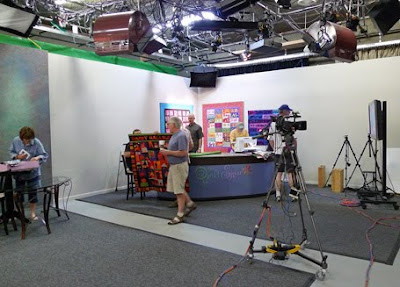 And another angle, with Alex smiling: 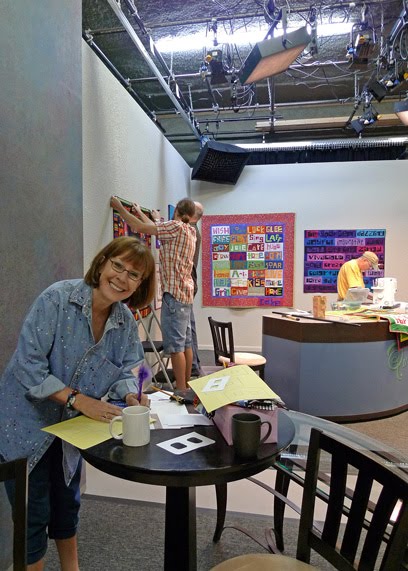 Set designer Jeff Bilyeau working on Slither Eek Boo (yes, I got it finished and Natalie Carlton did a great job with the longarm quilting): 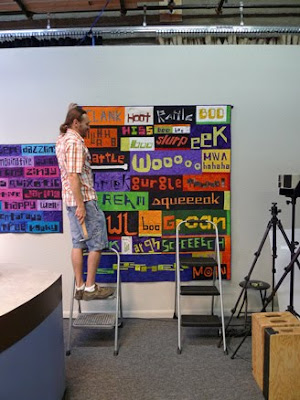 Alex and Ricky before the taping began: 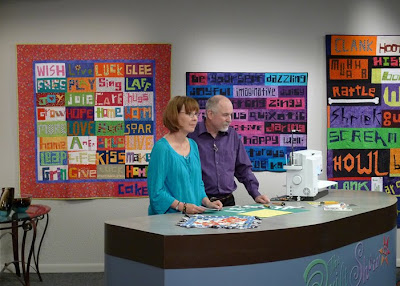 Unsurprisingly I have few photos after this point. I sat down on a chair over in the "living room" area in order to get out of the way. The day before I'd noticed how much "in-between" time there is during the taping, so I brought LAWS with me to hand quilt on - nothing soothes my nerves like hand quilting. I was able to focus on my stitches instead of holy cow what the heck am I doing here? anxieties.

Usually the guest is introduced and walks in and sits down. I knew that would freak me out - having everyone looking at me. Eek, so I begged to be allowed to start the show already seated working on the quilt and that's just what we did.

The whole thing passed by in a blur. I was told (as was the audience) "smile like an idiot" and look at Ricky and/or Alex - not the camera (eek) or audience.

I didn't even think about it until afterwards, but I never even looked in a mirror nor did a brush my hair. Hope it wasn't too goofy. My nails were in terrible shape. Per Siobhan's advice I did get a manicure beforehand--probably several days too early--but managed to chip it pretty quickly and then it went downhill from there - when I'm nervous I chew at my cuticles.
As far as I know the whole taping went fine. The demo ran a bit long and we didn't even use half of the material I'd prepared. I know I managed to get in some of the points I wanted to make but there were a whole bunch of others I didn't. Wow, that time goes by fast.
After it was over I admitted the whole thing went well enough: I didn't faint or throw up or act like a complete idiot. I know that's not setting the bar very high, but that's what I was hoping for.
More thoughts on this later, but I've got to get back to my kitty lovings. Pokey had to spend the week I was away in jail and she's in extra special cuddly girl mode. Here she is holding down my suitcase so it doesn't get away: 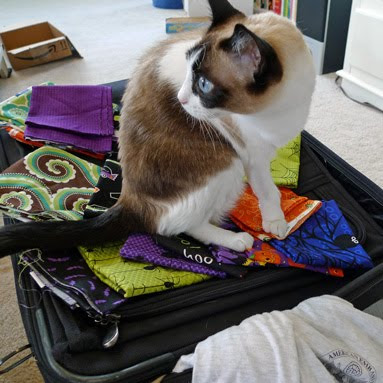 Email ThisBlogThis!Share to TwitterShare to FacebookShare to Pinterest
Labels: The Quilt Show

Guess where I am at this very minute. I'm filming The Quilt Show with Alex Anderson and Ricky Tims. 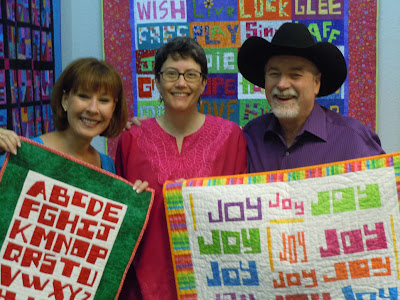 wheeeee! I'm sitting on the couch right now with Ricky and we're about to start filming. Gotta go now, will  tell you more about it later
Posted by Tonya Ricucci at 11:06 AM 56 comments: