International Quilt Festival in Houston is having a contest for THIS year called Text on Textiles. Before I include some of the details, note the part that says no part of the quilt may be published in BLOGS. So you gotta keep it secret.


An international juried and judged exhibition of quilts

Explore the use of text in this contest and exhibition from International Quilt Festival. Entries are quilts that speak to the theme. Any techniques—piecing, appliqué, embroidery, photo transfer, wholecloth and/or manipulated fabric, etc.—may be used as long as they are appropriate for the quilt (consisting of three layers) and the theme. Quilts must be made specifically for the contest and must not have been published in books, calendars, magazines, newsletters, websites, blogs, or any other form of publication prior to November 2011.

Registration is now open. The last day to register is July 1, 2011.

Me again. Eek that's not much time. Last year there weren't any UnRuly Letters. How about this year?
More info is available here. 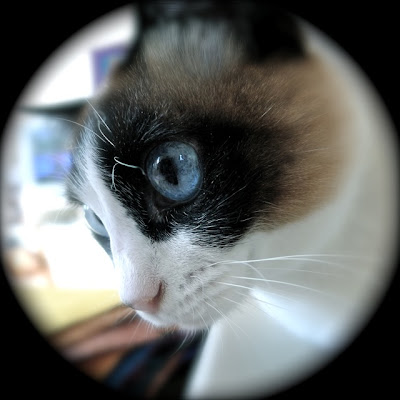 For months I had my quilt Rumspringa hanging up on the wall directly facing the front door. Figured it would look great to whoever comes to visit if that's the first thing they see. Well, to heck with that - I want to enjoy it myself! So I moved it up on the wall, next to the tv and directly facing the recliner. Ah, now I can enjoy it all the time. 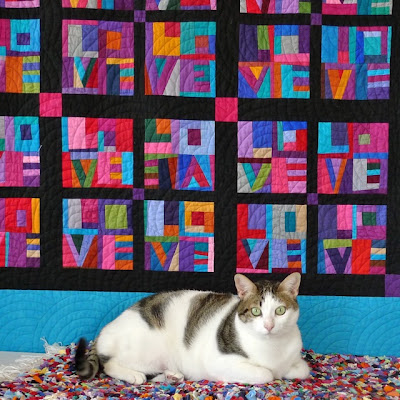 I am so behind on blogging so many things, such as my wonderful teaching trip up to the Orlando Modern Quilt Guild and how I finished three quilts and then unfinished one of them, and wanting to post a tutorial on Playing with Scissors. Agggh, too much. Plus, I spent the whole day sewing - been a long time since I really got going like that (thank goodness the horrible allergies that were making my life miserable have subsided somewhat).

So instead, I'll try to hold ya'all over with kitty photos. You can see the beautious Lily as well as some of my freehand fan quilting: 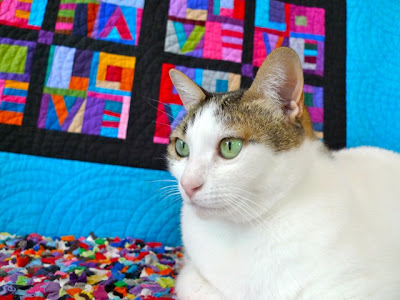 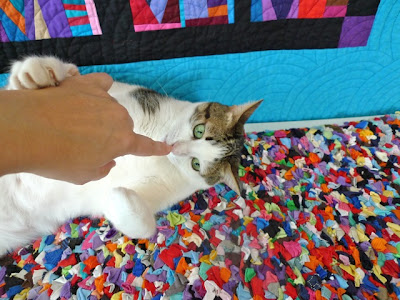 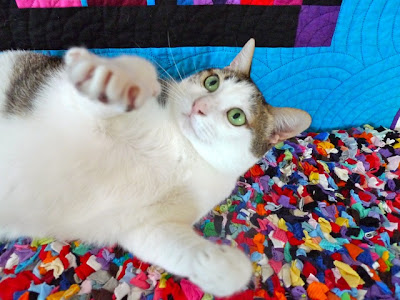 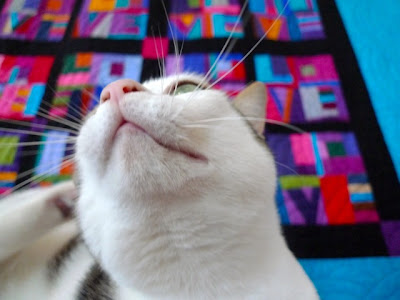 This came up the last time that I showed this rug. No, I didn't make it myself. It came from Egypt and was made by the women of APE (a horrible acronym that stands for the Association for the Preservation of the Environment ) located in what is commonly known as Garbage City. I only know of one place to buy it in the States and that's from the fair trade store Ten Thousand Villages. It's called a Shaggy Rag Rug, but unfortunately is only sold in black and white with a little bit of color.

Hope that tides you over. Ya'all take care.
Posted by Tonya Ricucci at 9:05 PM 34 comments:

I've been admiring the work of Andrea Balosky for sometime now - seeing mentions of her on the blog Wonkyworld and elsewhere. Andrea made a series of small doll quilts, with hand quilting. I love them and even bought the Small Wonders catalog, even though I wasn't lucky enough to see the show.

So when I found out that Andrea had six quilts available at the Alzheimer's Art Quilt Initiative, I dithered a bit (almost too long) and then sprang into action and purchased Confetti Sandwich: 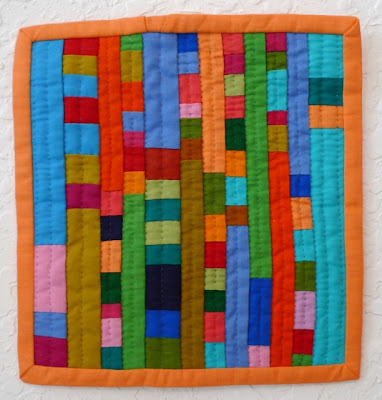 It's a win-win situation buying from AAQI. I donate to a worthy charity AND get a fabulous quilt in return. Woohoo. Okay, and the real reason I just had to get it? The Bart Simpson in me loves the name Mungpoo, which is where Andrea lives in India. Mungpoo, Mungpoo, Mungpoo. There is a wonderful article on the AAQI blog about what Andrea had to go through to send her donations.

Having it inspired me to make a quilt for the AAQI myself. I started with UnRuly 9-Patches but I ended up making it too big. So I added a border and I'm going to keep it for myself. Although now I'm wondering if that border is strong enough. That's my quilt on the right. I made my friend Kathy try one too and look at the fabulous job she did. This was all without rulers or measuring. 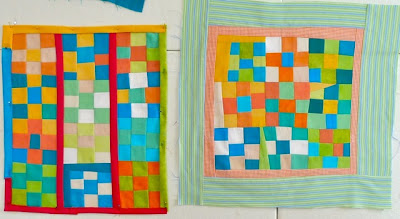 Kathy surprised herself by enjoying making this quilt. And wheee, look at the red she added - makes her quilt so much more dynamic than mine. That fabric is auditioning as the binding.

So since the 9-Patch was too big, I made a One Patch. What do you think? I've even got it quilted already. 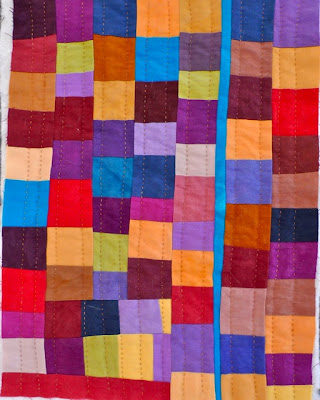 It was all made ruler-free. It's a mix of Cherrywood, hand-dyes, and regular solids. looks very art quilty to me, so I wanted to see what a similar quilt would look like made with repros. I wanted it to look like a child's first quilt, made for her doll from many many years ago. 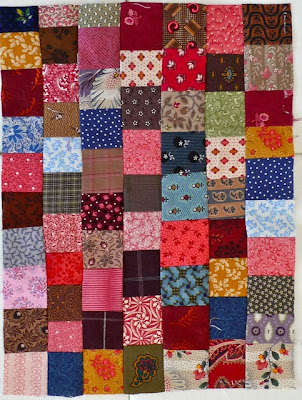 Whaddaya think of this one? Did I succeed in making it look antiquey? Would you ever have guessed I made this? Think it's worthy of donating to AAQI?

Would anyone be interested in doing something similar? I'll do a Playing with Scissors UnRuly Challenge for AAQI and give ya'all some guidelines etc (over on the UnRuly blog) if you are.

Ugh, I've run out of time to add anything more to this post. I'll try to get the next one done sooner! 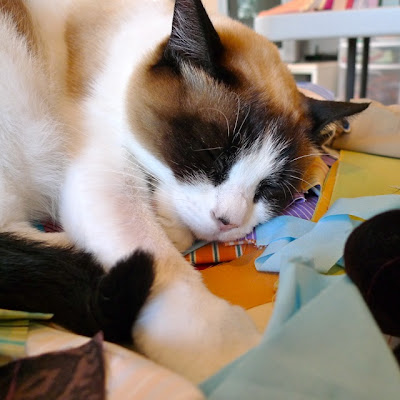 Ya'all take care!
P.S. I've somehow turned into a crazed Doctor Who-phile (Whovian???) this year after forcing myself to watch episodes during the BBC America Who Year's marathon. I once read that you had to try a food nine times before you could say you hated it. I'm not willing to go that far (tuna casserole? anchovies? liver?) with food, but I know so many folks whose opinion I respect and have great geek creds that I just had to force myself with this show. I had it on in the background while I sewed and when I was really bored I didn't finish the episode (daleks, zzzzzzzz). Fell in love when I saw the episode "Voyage of the Damned," then "42" and "Blink" nailed it. It might just be my favorite ep ever.

Can't stand the first season of the reboot (except for the WWII creepy face mask children eps). I hate Rose, her mother and Mickey, really like Martha Jones but wish she weren't so mopey about the Doctor. Donna was great but I love love love the current Doctor and Amy and Rory. Anyone want to come and discuss the show with me, become my friend on Facebook! I don't want to give anything away here about the AWESOME latest episodes, The Impossible Astronaut and Day of the Moon. The Silence? So darn creepy.
okay, that's really it this time. cheers!
Posted by Tonya Ricucci at 9:22 PM 38 comments: