photos for the next entry

I'm getting used to how this blogger thing works. Sorry, but these photos should come after the next entry so you can always skip down, read that and then come back up here and it might make better sense. There are reasons the technologically inferior should not be working on the computer... 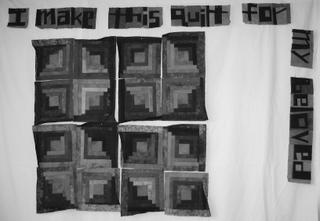 This is the current work in progress, shown in black and white to check for contrast. 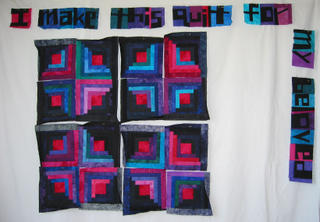 This is my current work in progress, the source of much frustration - read the next blog entry for details.
Posted by Tonya Ricucci at 11:03 AM No comments:

I am an admittedly lazy lazy girl. Combine that with my tendency to procrastination and it's amazing I get anything done at all. I have a tendency to cut corners, figuring so long as I like the end product, what's the big deal. I'm not making quilts to last the next 500 years, I just want something that looks great for the next 50. Who am I kidding, I'm not going to live that long. The next 40 years will do fine.

I've only twice in my life ever measured the borders before attaching them and then only because the quilts were completely hand-done and I had to know exactly how long to make them. I've never had can't-live-with-it results and know quilts of mine wobble a bit. I can live with that. I have actually started to place pins in before I piece because my tension/presser foot/something isn't even and long strips of the exact same length come out unevenly, so I have compromised that much for the quilt police. A couple of years ago I started pulling my quilting thread knots into the middle of the batting instead of leaving them on the back. I always figured (and still do) who cares what the back looks like. Then it hit me that if the quilt got moved around a lot, those darn boogers might get worn off and all my hand quilting might just pull out stitch by stitch. Okay, can't live with that, so I am disguising the knot now, altho I pull it through the bottom layer, not the quilt top because I always seem to snag a thread and get a run in the fabric or else a huge hole with batting oozing out.

My blocks always have a tendency to come out a smaller size than what they should, given that I am trying for a quarter inch seam. Seams don't line up even with pins and re-doing them several times. You get the picture. So over the years I've adapted my style to my precision-impairment and loosened up a whole lot. I'm generally a happy quilter and don't stress the small stuff.

Which is why I am utterly amazed at my inability to "go with the flow" on the queen-sized bed quilt I started in January. For some reason I keep hitting a wall that says "I don't know what I'm going to do, or what it's going to look like and I can't continue and I can't waste fabric" which is utter nonsense. I KNOW it's utter nonsense and yet I hesitate and put the blocks aside and am generally unhappy with the quilt. That's the primary reason I decided to start this blog: If I have some kind of pressure on me to produce (need new photos for the blog) I MAY just get something accomplished most days. Even some days would be an improvement.

Part of the problem is that I keep changing my mind on what the quilt is going to look like. I started with the idea of writing a message about why I am making this quilt. See, I love quilts that have writing on them, esp the maker's name and the date. Back in 2001, after working with Gwen Marston's liberated methods, I figured out how to make improvisational letters and that opened the floodgate for me. Quilt after quilt with words on them. You'll undoubtedly get to see photos of some of them whenever I am stuck and have no photos of recent work to put in. So this was going to be a huge project with lots and lots and lots of words. I put together a whole lot of letters, which was quite boring to do even tho each of them goes together differently. Worse than that, I was afraid some of my letters were too dark and the writing would be illegible. That's not necessarily a problem, I've done quilts like that intentionally. But did I want it on THIS project? How was I going to manage to do this big project without my beloved design board that got sold off (it was glued to the wall) in my old house? Gosh darn it, how big is a queen-sized bed anyway. Too big, too much work, I'm bored with the letters.... It went like that and I tossed the letters aside.

Okay, how about a log cabin quilt? Maybe that could be the center of the quilt and the letters could be the border. Started the log cabin blocks and wasn't happy with them either. The 3/4" finished logs are too wide, should have made them even narrower. My seams aren't straight and I was actually trying to make them straight and they are coming out a bit wonky, but not wonky enough to make it look like I did it on purpose. So got frustrated with those too and tossed them aside along with the letters and didn't look at ANY of it again until yesterday.

The gloominess of January that made all the blocks seem so dark seems to have lifted and I can see there's nothing wrong with what I've got so far. Still lost in the woods but I need to keep trudging onwards instead of lying in the mud crying. I made myself a design wall by taking down the large quilt hanging on the wall and using its rod to pin a sheet over. Now I can design, but it won't be nearly big enough for a bed quilt. Doesn't matter, concentrate on "how does it look so far?" Just fine. Was actually smart enough to take a photo and switch it to black and white to check the contrast and turns out that's just fine too. Going to start working on the letters again and take it from there.

Now theoretically there were supposed to be a couple of photos here, but for some reason they're not showing up. Rather than take the risk of losing all this I will publish and try to add photos later.
Posted by Tonya Ricucci at 10:35 AM No comments: 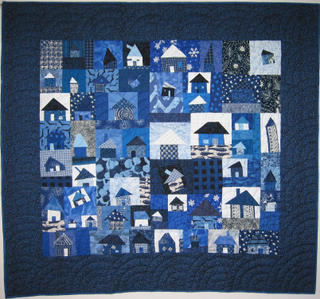 This is the second quilt that I made using Gwen Marston's Liberated Quiltmaking techniques, probably in 1997. It has a soothing quality to it, looks oriental. For years and years after I have continued to buy fabric for this quilt that is already made. Ooh, look gorgeous sky fabric, ooh this would look great as a roof... No, I haven't actually made another blue and white house quilt and I doubt that I ever will. I didn't say that all my fabric purchases made sense.

I used to have a blue and white dining room that this worked in perfectly, but it doesn't look as good in my living/dining room combo along with all my turquoise, purple, pinks, teals, magentas (you get the picture) - it looks dull. 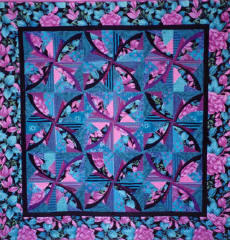 This is a quilt that I made a while back - finished it maybe 10 years ago. I chose to show this one because it's an excellent example of the colors that I use and it just happens to be a good photo of one of my quilts, something I am sorely lacking after my hard drive melted down with no backed up photos. I got the basic block pattern from the Japanese magazine Patchwork Tsushin and have no info on who created it. While I love the colors in this quilt and the curvy Xs, I really missed out on all the secondary designs. Live and learn. This was entirely hand-pieced and hand-quilted and now belongs to my Mom and Dad.
Posted by Tonya Ricucci at 3:45 AM 2 comments: