Okay, okay, I've made a decision - I'm leaving the border as is on the bed quilt. I had the top out to show it to a friend and the different bit just didn't look distracting or bad, so it stays. That is after all, the lazy decision. Now i have to acquire the backing fabric. I'm going to get the biiig fabric so there are no seams in it - I don't need no stinking additional seams, this quilt is going to be torture enough to hand quilt as it is. Then I have to wash and iron the backing fabric, a chore I'm not looking forward too, but is necessary since I have so many allergies and fabric sizing seems to be one of them. Go in a fabric store and immediately get the sniffles. 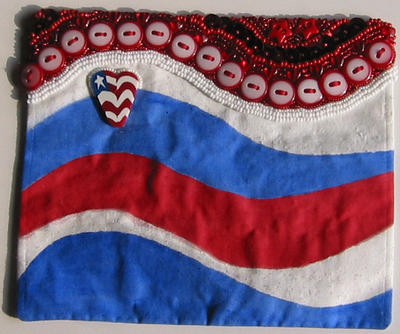 This is the project I am working on now, since the bed quilt is not ready to go. I actually started this project over a year ago, after Andrea Stern's article on "Extreme Embellishment" in the Spring 2004 "Quilting Arts Magazine" appeared. That was my first real exposure to beaded paintings, for lack of a better term, altho I have seen others since.

I got much further along than this, but was really unhappy with how it was turning out. I had all white background, only black and white silamide, and no itty bitty beads. I threw it into the UFO pile where it sat for a year.

Earlier this month I dug the project back up and removed every bead and button from it. Then I painted the background with acrylic paint (which if you water it down too much bleeds all over the place - I'd rather have difficulty shoving the needle through the thicker paint myself). I purchased red and grey silamide and some size 15 seed beads when I was in the States in the spring so I was much better prepared this go round.

Much happier with it this time for the reasons I've already mentioned, but also because I didn't have little isolated pieces that I was encircling separately - this one has flowing lines. It's also easier to add a line to one that already exists, rather than having lots of separate lines that then must be joined smoothly.

Wow, my 2-month old computer hard drive is making a horrible loud buzzing noise. I really hope it's not about to explode - I do NOT want to have to get another and then reload everything onto it - what a pain in the ass that was. Me and computers - scary combination.
Posted by Tonya Ricucci at 7:07 AM