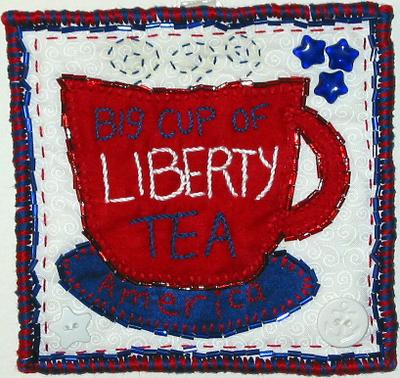 So I'm posting the last of my 4th of July quilt photos. July is just about over, so it's time to get the house back to it's usual state. This is Liberty Tea - it appeared in a photo of several of my 4th of July quilts, way back in June. This is another crustie, inspired by the methods (but not the subject matter or style) of Susan Shie. Made this one last year. It's not too much larger than this photo.

I'm now on season 3 of "The Gilmore Girls" and rather bummed by the whole Christopher thing. I really liked having him around. Not to give it away to anyone who hasn't seen it, but the whole deviled egg bit after the baby shower was priceless.

We're just finally getting "Angel" season 5 over here, which I managed to miss, seeing as how we left the states right as it started. The most recent episode about Spike and the Reaper was excellent. I've never been as big of a fan of "Angel" as I have of "Buffy" - the whole humourless tortured vampire with a soul thing got old. Thank goodness for Wesley and now Spike for enlivening it. But, ouch that hurt when Angel said he'd always liked William's poetry. William, that was Spike's name, right? Early onset of senile forgetfulness here.
Posted by Tonya Ricucci at 5:50 PM