current project and other stuff 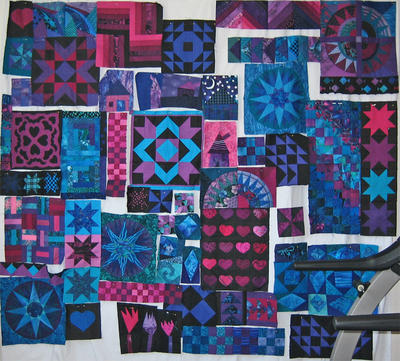 I've sewn a bit on the orphan quilt and moved blocks around. Trying to get black balanced out and not too many pointy bits together, not too many straight lines together. Sewed my nine patches into rows to make it easier to see how they were going to work. Think I need some pink in the lower right corner.

I'm not working on this quilt very fast. I don't want to go too fast (what, me impulsive?) and start chopping blocks up and then realizing it doesn't work. That and I walked to my friend's apartment for quilting yesterday and now my knee hurts a bit more. I was fed up with being invalidy and now look at what I've done. It's no big deal, just need ice packs again. This aspirin stuff does not seem to be such a miracle to me.

Watched one of my favorite gross-out movies, John Carpenter's "The Thing." Yes, it overdoes the gore, but I love the tension that builds up, the isolation and paranoia. One of my favorite X-Files episodes, "Ice," owes a lot to this movie.

A friend loaned me the first season of "The Shield." Wow. I love a show with moral ambiguity, with reprehensible characters committing illegal, immoral acts who still manage to gain your sympathy before the end of the season. I would recommend it to anyone who loves "The Sopranos" so long as they don't mind if it's the cops who are the bad guys, not just bad guys who are bad.

Rockstar:INXS update. Last week it wasn't a surprise that Jessica went bye-bye. She seemed to be just phoning in her INXS song. I like Deanna's raspy voice, but not how she sings. If you could just combine her with Jordis, they'd make an awesome combination. I want Deanna to go this week. She just so obviously doesn't have it for the long haul. And her song sucked, as did MiG's tho they both sounded good. I'm worrying about Marty tho now. He does seem too punk for the band and they definitely let him know it.
Posted by Tonya Ricucci at 6:37 AM

Lookin' good Tonya..I like the partial re-arrange, and yup to some pink in the lower right corner.It's neat that you taught yourself to piece by working your way through blocks in the Quilts, Quilts, Quilts book. It's a good book to learn from. I also like the Fons and Porter Quilters Complete Guide. I was lucky enough to get one of the early ones that are spiral bound. I still use it for quick referance in sizes, and some triangle math.