Snowman and the kitties

They're in the process of painting the apartment building I live in so there's been lots of noise out in the hallways, completely unsettling the cats. I think the paint cans have actually been opened now and the fumes are coming in. Yuck. Hope this whole thing doesn't last long. The worst bit will be the guys on scaffolding right outside the windows - I'm going to have to keep all the curtains closed. I hate living in the dark.

Completely unsurprisingly, my hubby hates the Jacks quilt I started. I expected that. I'm not that attached to the quilt, so it doesn't bother me much. Besides that quilt might just morph into something with hearts...

Here's another bit of my Christmas for you. This is a large snowman I made last year. 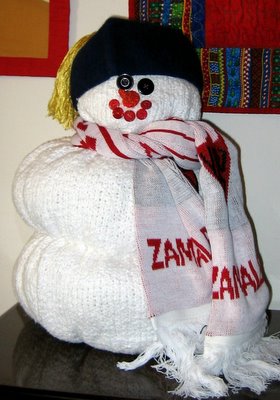 Before you ask, no I haven't shown you the quilt that you can see behind his head. That'll be posted in a few days.

I made this snowman out of a sweater my Mom knit many years ago. She wore it for years and then I did. It was stained, some of the yarns were pulled and unravelling and it just wasn't in good shape (not to mention my hips had outgrown it...).

I made the carrot nose doing my "thready" thing with embroidery floss on a triangle of canvas which I then turned into a cone shape. The snowman is wearing a magic hat to keep him from melting: a tarboush (called a "fez" in other North African countries) as well as a scarf proclaiming him to be a supporter of the Zamalek football team.

I'm sure my Mom wouldn't have minded that I recycled the sweater she knit. Believe me, it's getting more use and love this way than sitting in the closet. Here's Pokey checking out the Snowman, who actually sits in the glassed-in china cabinet so that the cats can't play with him (he was just out to get his portrait taken). 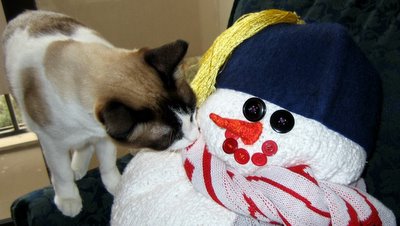 And while I'm boring you with cat pictures, here's Lily trying to get ahold of one of the Christmas stockings. The stockings are hanging from our locally-made mashrabeya screen. 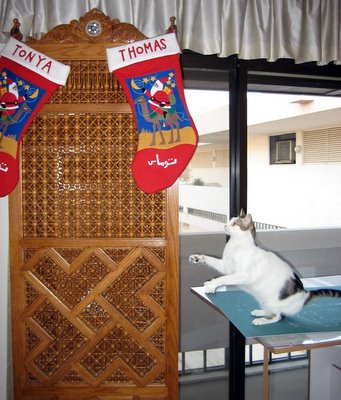 Posted by Tonya Ricucci at 7:36 AM

Email ThisBlogThis!Share to TwitterShare to FacebookShare to Pinterest
Labels: Cats, my other art/craft

Your snowman is adorable, Tonya! I think your Mom would be delighted with your innovative use for her sweater. I love his nose.

What is the screen used for? Besides being just plain gorgeous!!!

Kitties are adorable. Looks like they are young at heart

Snowman is so cute. What a great use of a family treasure.

And I'll never get tired of seeing cute cat pictures. :-)

Ton, if you mom was at all like you, I'm sure she is grinning from ear to ear at your creative use of the sweather...SOOOO much better this way than in the closet.

The fur baby photos are just great..I love seeing them in action. You know you decorate just to give them a new "playground", right?? *VBG*

You are so creative - using that sweather and making a snowman! It is too cute! And I love your stickings hanging there!

We got our tree this morning so if we get our stockings out I"ll show how we have to hang ours up!

What great pics of your furry babies.

And as a knitter, I know you're mom would be tickled that you made the sweater into something you love so much.

My Tigger is upset because a new person moved in next door and she is very loud. We're such quiet people that he's having trouble adjusting to the noise. (Or maybe our whole little family is just getting a little cranky as we get older.) LOL.

Aloha and thank you for sharing.

too bad about the paint & noise. Love the snowman and the nosey cats....