I keep thinking I should actually set foot outside my apartment today. There is some sun out there - even tho it's awfully hazy and gray. I need to go buy a new phone card so I don't lose my cell service. Maybe get a couple of last minute (they're getting shipped) gifts to send to the states...

I'd so much rather sit and quilt. I've done several of the border fan units on the Noel sampler. I'm actually just following along on the needle holes from my previous attempt at quilting it.

I decided to use one of my Santa Stars to make the name tag to go on the green and red button bag. He's attached thru the loop at the top so he can swing free and not hide all my work. 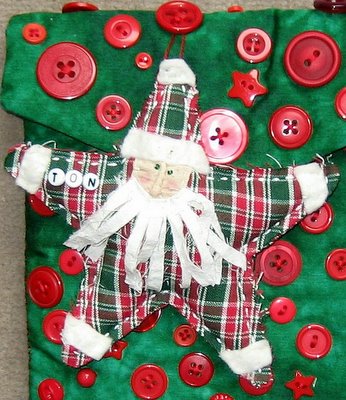 One christmas several years ago I combined a few different Santas I'd seen and came up with the little Santa Stars. I made loads of them that year and the next. Most of them are in storage, but I did bring a few along - they usually hang on the tree and I've considered making some kind of garland with them, along with buttons and selvage.

And here's another one turned into gift tag - I do so adore those letter beads. 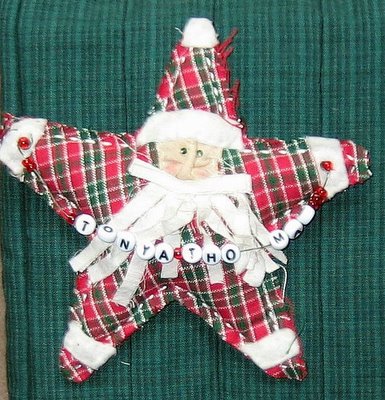 And here is one actually hanging on the tree where he belongs. 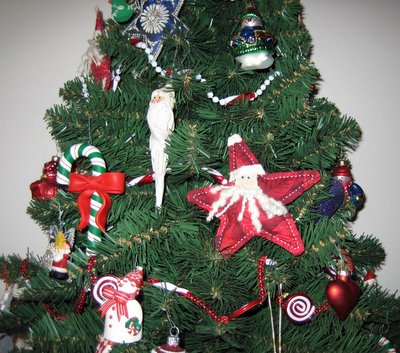 This last one actually has the kind of beard I adore - it's some kind of boucle-type wool that I bought at Houston Quilt Fest one year and have never found again since. The top two guys are muslin-bearded. I generally use cotton batting for the trim on the hat (and mittens and boots as on the top two).
Posted by Tonya Ricucci at 4:28 AM

Email ThisBlogThis!Share to TwitterShare to FacebookShare to Pinterest
Labels: my other art/craft

very clever... I saw clowns made similarly in the past.

BTW I have big pictures on my blog today...

Oh Tonya! I love these star santa's! Oh you have such wonderful ideas! I especially love the one you hung on the red bag! I love those plaids!

Can I come over and steal that bag and santa?!!!

Working from home today - suppose to get a bunch of snow so thought I would just stay put!

Those Santas are adorable, Tonya! I love your use for them too.

Their faces have so much character. Cuties!

I'm glad you shared what type of beard the last one has...I was wondering right away!

What great Star Santas..he's very fetching..*VBG* And a neat idea to hang him on a gift bag!

I've never seen those little alphabet beads before. Actually I rememeber back to when they were used to make a braclet that went on the wrist or ankle of newborns at the hospital...older than dirt..that's me..LOL

Think I'll keep my eye open for them. I do love words in quilts but before names on the bottle quilts, all I had done was used printed directions, etc. and make blocks from them.A whole new world has opened up for me..*G*

Oh, Tonya, what beautiful tree decorations. I love the Santa Stars. Thank you so much for sharing these wonderful pics.

Finn, the beaded baby bracelets were so cute. Much nicer than the plastic hospital bracelets. I had mine on my doll when I was little. :)

I Love these! But I loved the Dear Santa quilt, even more! I have been working on a wall hanging for DD- she drew the picture. I have it all together, now I am finishing the binding and last- yes, out of order- I am embellishing. I always find alot of liberating ideas, here, and I am wondering how you decide when enough is enough. DD likes things over the top- she's six, but I don't want to detract from her art work. I know you are artistic, but if you had to advise some one with, say, no sense of natural ok-ness, is there a general rule about these things? This is all new and different to me, so I'd appreciate a little guidance if you have the time. Nina

Your star Santas are fabulous. Love them on the tree...great look. Now I want to copy you some more!!

I love the santa stars. That is one christmas ornie that I'd be happy to make..maybe NEXT YEAR :c)

Those clever santas - another great idea!

Houston Quilt Fest...Tonya are you a Houston person? We're just north up a ways in Liberty County.