Oh no, not another wonky houses quilt. Yes it is, and too late, you've already looked at it. Mwa ha ha ha. This is about the last one. Really. This is Dear Santa, made in August thru December of 2001. 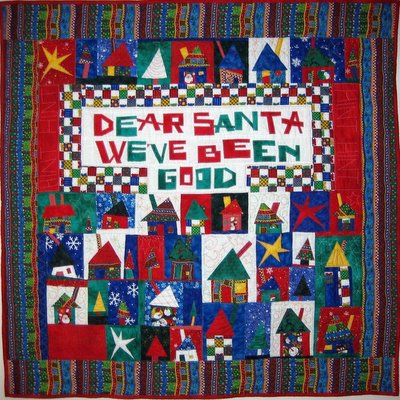 I really liked the curvy stripe fabric, plus a snowman fabric that I thought would be part of the border too, but simply looked awful and didn't. I cut the fabric so that the stripes all ran up and down in the borders.

The free-pieced letters say "Dear Santa, we've been good" and the quilting in the red areas says "hint, hint."

This next house shows you a detail of the presents fabric that surrounds the words. 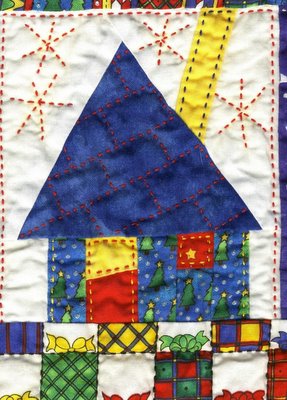 Trees are even easier to make than houses. 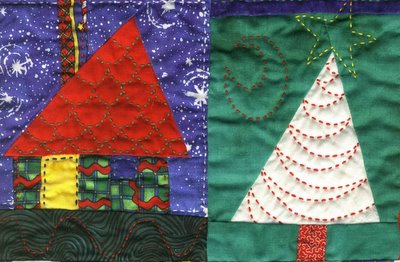 I'm showing this next one to encourage ya'all to just draw something out and quilt it. I think people sometimes have a tendency to say "oh, I can't draw" and not even try. Well look at this sleigh being pulled by one reindeer. That's a stick figure reindeer alright, but you knew what it was, right? You just have to TRY and practise a few times. Draw it on paper until you get comfortable and then use something temporary to draw on the fabric. 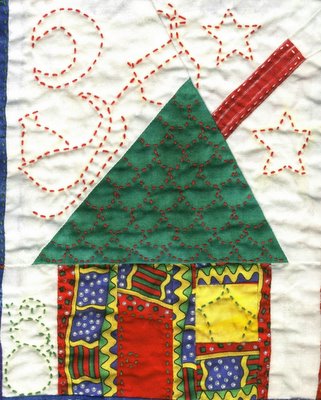 here are words quilted in with all six strands of embroidery floss so that they're thicker and bolder.

I've gotten a lot of quilting done on Noel - I'm all the way into the border. I'd have gotten more done today except that I had to read a book for awhile so that Pokey could lie on my lap. I'm trying to plow through Sandra Mackey's "The Iranians" - a country and people I'm fascinated by, but this is a bit more detail than I need. Sixth century poetry, bleck.

Did I tell ya'all that we watched a couple more of our Christmas movies on Saturday? "Desk Set" - the best movie Tracey and Hepburn ever made together - the two of them are so magnetic and funny. The ability of the 1957 computer to directly answer questions is a laugh. Can't even really do that now. The other film was "Catch Me If You Can" - one of Steven Spielberg's best (nothing too treacly and sweet) plus some of the funnest retro credits ever.

Posted by Tonya Ricucci at 9:16 AM

I LOVE how you quilt! I am so inspired! I just need to decide to quilt one of my quilts....

Oh I love your xmas quilt! This one is adorable! And your little designs you can quilt in are always so fun! The striped border fabric is to die for! I Love it!

Hmm, haven't seen "Catch Me If You Can" - will have to go rent it I guess! And I never heard of "Desk Set". Another one I can check out!

Tonya, that is so cute and creative! I love Rudolph (or whichever reindeer it might be) up on the roof top!

I have embroidery floss on my shopping list. Thanks for showing me how I'm going to put my son's name on his Dragon Quilt.

Your quilts are so beautiful. I can tell by this time next year I'll have a Chrismas quilt. Thank you for the inspiration. ;)

Be rendering of Dear Santa that I've seen yet...*G*G*G*G*G*G* I love how you play Tonya! Leave it to you to find fabric that you can turn into presents...LOL.

Serious, you quilting is inspired, and you know I'm sort of a "free baser" when it comes to that..but you pull out ALL the stops! I'm gonna put that on my list for next year. I do let mine wanted off course and into alien territory at time, especially when I am bored with straight lines...but I can go further.
Haven't quilted with embroidery floss...do all six stands stay together well and pull through? I keep thinking of embroidering with 3 strands and having one that wants to play loose on me.

I certainly can see why you thought my wonky houses were too structurally sound. I gotta think more like "Who-Ville" don't I???

Tonya, I love this quilt! Your creativity is inspiring. I'm with Finn wondering how many strands of embroidery floss you use for the regular quilting, or if you use perle cotton. Let us know!

Hi guys, nice to see ya all.
For most of the quilting in this I used size 8 perle cotton whenever possible - it's just plain easiest. When I needed a different color I used 3 strands of embroidery floss (it's about that same size). Just for that one showy area did I use all 6 strands of floss. Yes, I sometimes get problems with the floss strands separating and have to do some straightening and pulling to get them back together (or not, that happens too and it's not that big of a deal). For more details see my August 24th post on perle cotton.
Finn, that was real fabric that had presents on it - I didn't make them, tho I think it could be done but not that SMALL. Yes, think Who-ville for sewing houses - much more fun that way.

LOVE all the fantastic quilting on this one!

I love the quilt, of course. Desk Set is a great movie..

I love seeing your quilting detail. It gives me such GREAT inspiration. I think alot of us are stuck 'in the ditch' or just echoing 1/4" away when we can really do ANYTHING..and your quilting makes the piece just come alive. I love it!

Your wonky house quilts are great and this one is probably my favorite. I like the wiggly striped border fabric, too, and how you stitch cool designs. It's always a treat to see what you have been doing :) You are full of ideas.