Woohoo, I finished my Noel Sampler today. I don't think the green is really quite this dark, but still a pretty good likeness. This is a pic from before I washed it. Why is that important? Read on... 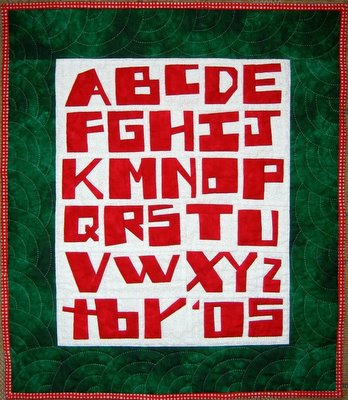 Here are some freehand fan details. The quilting shows up really well on this mottled background. This is the lower right corner where I started and ended the border fan quilting. I didn't want an empty space, so I continued to quilt two partial fans where they would have been if I was still going around. 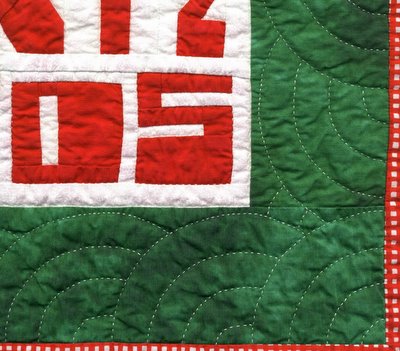 Uh oh, is that red bleeding into the white? At first I just thought it was because the quilt wasn't completely dry yet and so the red was just wet and showing through. Then when I put the quilt on the scanner I noticed the red all over the white backing fabric. D'oh, definitely some bleeding.

Next corner. Are you noticing how each of the first arcs in each unit varies widely? Some are really small and flat and others a bit tall. 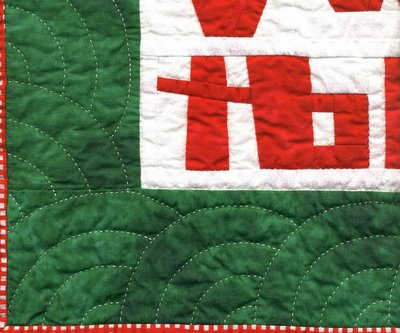 Third corner. Notice where I started the next unit after turning that corner. 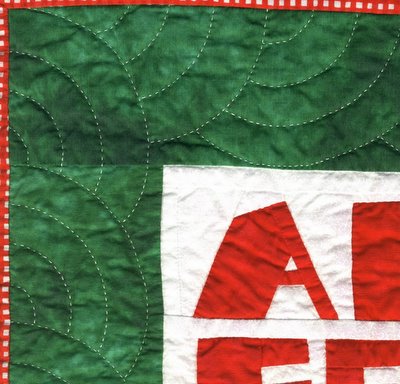 And the final corner. I love how every one of them is a bit different. 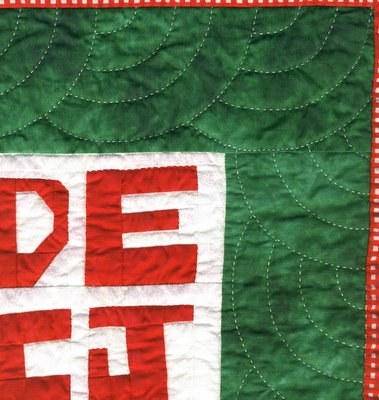 So yeah, I had some bleeding. I rerinsed the quilt in the sink with multiple changes of really hot water and lots and lots of Color Catchers and Dye Magnets (I just kept throwing more in) - I thought it was interesting to see how much dye they really did pick up. 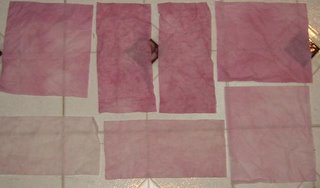 Hurrah - this actually worked - the quilt looks great. Rather a weird coincidence after Bonnie had some red bleed in her fabulous The Best Things in Life are Quilted. And my quilt too has its eccentricities - a bit wobbly and the fabric all gathered up around the quilting - the effect of pre-washing the fabric but not the mostly cotton batting.

Didn't get much done today besides finish the quilt, wash it a couple of times and of course take numerous pics, and read what everybody else is doing. Am I spending too much time blogging? Have to wonder sometimes. By the way, yesterday I played with my new program and did three hours of French language lessons - I now know how to describe five different colored cars.

Posted by Tonya Ricucci at 8:21 AM

Email ThisBlogThis!Share to TwitterShare to FacebookShare to Pinterest
Labels: hand quilting, my quilts

It looks great, Tonya! I hope mine turns out half as nice. I already know my gold bleeds from prewashing... uh-oh. I love the fans, gonna have to try that on something. Did you quilt the center? It's lovely. Thank you for your kind words over at my place :)

Love the final look Ton! And it's so interesting, how the corners work...it's like it improved each time you did it..LOL. I'm plugging away, altho, slowly at my fans on those halloween faces. Takes me way longer to complete a set of fans than when they are marked..but I'm hangin' in there.

I have one quilt, the Evening Star that bleed...guess I'll have to get some Dye magnets and try the rewash. Mine bled when I used too wet a wash cloth to remove the blue lines from the cream background. Seeped over into the small red border..drat! Good to know something works..*VBS* Love seeing your letters again..especially the Q, I'm thinking I might just put a "Q" into the boxes I'm making for grandson Quenten...maybe an orange and lime green one!

I'm so glad you were able to "catch" the dye, and prevent it from ruining such a gorgeous piece of work. I love how each corner is different. I don't know about you but if I wanted it to look factory made, I'd buy factory made! :-)

Thanks for sharing the info about the bleeding. Very valuable.

The quilt is so pretty. And I love your quilting. Thanks for taking the time to take pictures.

Oh Tonya! Love your Noel Sampler! And of course love your fans. My free hand piece is still sitting right next to my bed! I actually was just thinking about it last night!

Got to figure out what's wrong with my blog in Netscape - but while I"m sitting here I"m staring at our globe and believe it or not Egypt is staring me in the face! What a coincidence!

I love it...pinky-ness and all. Those reds are just a culprit even if pre-washed...but still worth it! I love the freehand fans. You are going to get me doing that yet, I can tell! I can feel it!