How's this for gorgeous?

This is an applique that a friend of mine bought downtown on Tentmaker Street. Isn't it smashing? 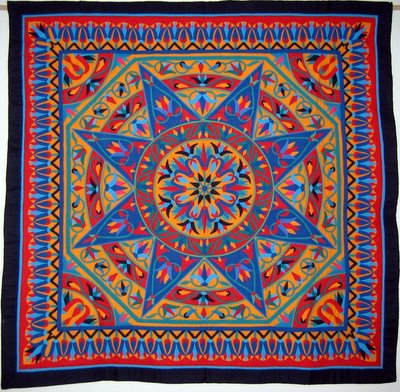 I love the colors: cheddary yellow, red, two shades of green, and three shades of blue. The color is truer in the top photo. Almost looks Pennsylvania Dutch to me - like a hex sign. 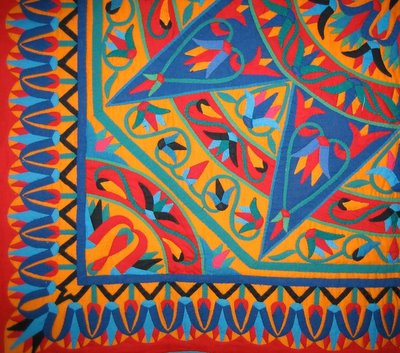 I don't know the details of how it was made, but I can tell there is a foundation of heavy canvas and then I suspect the cheddar was basted over the top of it and all of the work was then stitched to the cheddar, with only a few stitches going all the way to the back of the work. The narrow bias is maybe a quarter of an inch thick, if that.

This work is a perfect example of "don't sweat the small stuff." When I look at it up close I kind of freak out - the applique stitches are large and the thread doesn't always match the fabric. Some of the fabrics are really poor quality and gauzy. It's definitely not square and I had a hell of a time sewing on the sleeve (I only volunteered so that I'd get to take photos for ya'all, so I hope you appreciate it). There are stray threads everywhere that need to be clipped: so tempting to just tug at them, but who knows where that would lead.

But as soon as I step away from it and just LOOK at it, ah, I LOVE it and wonder why I was ever concerned about the workmanship. I wonder why I didn't buy it myself (okay, other than it not being my colors, tho I do love them). I've got it hanging up in my hallway right now and it's gonna stay there until my friend visits.

On the personal front, nothing new going on with me. My next task is to sew together a backing for my lettered bed quilt (see my July archive if you've never seen a pic of it and want to). Initially I was planning on handquilting it, but I've come to my senses. I don't want to spend the next ten years quilting it myself. So one of these days it'll go off in the mail to Bonnie. The only thing that's holding me up is that backing. Oh, and I decided it just wasn't long enough, so one strippy row at the top. Won't be much work, I just have to DO it.

Posted by Tonya Ricucci at 8:03 AM

It was nice to hear that the workmanship is not perfect = It looks great anyway. Thanks for sharing it. I am assuming that the design is traditional? (Are they all similar - lotus like flowers, etc.?)

OMG. Thanks for letting me know about the workman ship, as it makes this beautiful work seem human :-)

Love the colors and design..they seem to read like stained glass for me, but without the leading.
Isn't it amazing how so much close work doesn't equal quality work? I suppose, like the quilts the Amish made for the English, it's about selling.

No, this isn't a traditional design, altho the lotus is definitely a motif that appears a lot. I haven't seen any other tentmaker making stars like this one.

The examples of tents (which is how the tentmaker tradition started) that I've seen don't have any figurative elements at all and neither do the works that are based on traditional islamic designs.

Oh Tonya - I"m SO glad you posted pictures of this! the details and all the things going on in this are amazing! It is sooo cool!

Can you steal it back from your friend for me?

Tonya, sent you and email, let me know if you didn't get it. I know for awhile you and I had problems with blank emails. And you know what - ever since you mentioned it I'm getting them! But I don't think they are from you.
Dawn

It's beautiful. I love the colors.

It's beautiful. I love the colors. Your Noel quilt is really nice too, I might put away my knitting for a bit and drag out my quilting.

Wow. That is gorgeous. So many things to see and try.
Darilyn

OMGOODNESS.....This is breathtaking. Amazing to think that we can't even hold a needle to a TENTMAKER! This is the most beautiful applique I've ever seen....

That is gorgeous. I can't even begin to imagine doing all that work.

Tonya, I'm pleased to have found your blog!

I'm living in Cairo too (Heliopolis) and was trying to figure out the best place to buy material for what will be my first quilt. Any suggestions?

Tonya, that is gorgeous! I love the colors and from the pictures, it surely looks perfect!

Could they have killed her in the English hospital? Highjacked her plane? Kidnapped her from the marketplace? Coudl her cats have reverted back to their wild state and attacked her in her sleep? Noooo....she is out shopping and making biscotti! I've finally resolved to use this damn blog thing in the new year...it is the only way I can keep up with you and Bonnie!

This applique piece from your local Tentmaker is...undescribable! Wow!!! Glad you took a pic of it, Tonya.

Just for curiousity sake...could you give a range that one would have to spend to purchase something like this?