I'm going to show you a picture of my Red Christmas Tree quilt and you are going to look at it and say that is soooo Tonya. At least I look at it and think it's so me. But the truth is, this one was someone else first.

I've only ever made two quilts exactly to someone else's pattern. One I at least changed from really sweet white and pastel pinks to black and hot pinks, but this quilt is almost exactly like the original, and that includes the colors. Gwen Marston published the pattern in a magazine in November 1993 and I so fell in love with it that I copied it, finishing in May '94. 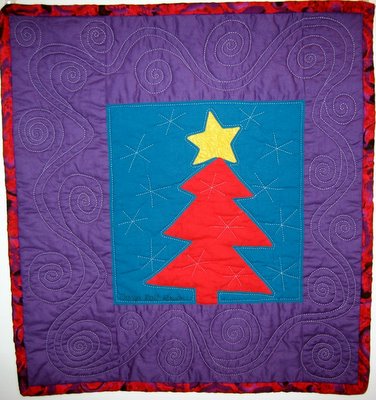 I'm ashamed to say that I even traced the pattern of the Christmas tree, rather than drawing out my own which would have been easy easy easy. Twelve years later, I can wing stuff like that without worrying.

What do I love about this quilt? The colors and their placement. OOh purple mismatched width borders and a RED tree on a green background. And look at the beautiful quilting design. That was easy enough to draw freehand with chalk - it's not supposed to look precise so that makes it much easier to just DO.

You start by making the curvy double line around the border and then go back in and fill in spirals. I've used this design a couple of times since.

So I copied and I learned. I still love the idea of a red christmas tree and after I'd learned Susan Shie's technique I used it to make this little guy back in 2001. Doesn't look like anything she'd make, but it does look like me. 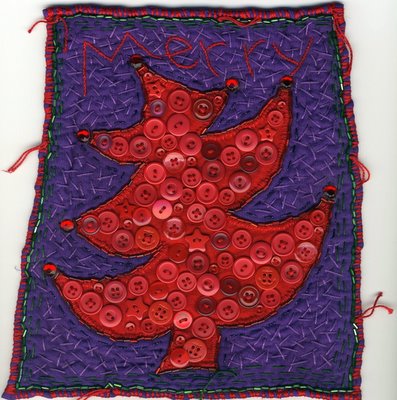 I actually got the idea of doing all those buttons from a wool crazy quilt that some creative quilter had embroidered a giant chicken outline on and then filled with buttons. (Sorry I don't have a copy of the pic, for all you chicken lovers out there - believe me, it was fun.) I glued rhinestones on there and am thrilled they've stayed on.

By the way, I've been having an ongoing discussion lately about "name-dropping" in blogs. I happen to like knowing where people got their ideas and inspirations from. I'm not saying "ooh, I'm special I know who this person is" I'm saying "Wow, this person really influenced me and if you don't know who they are, then you should check them out because you really might like them too."

Posted by Tonya Ricucci at 6:22 AM

I can't believe how cute that red tree with blue and purple is! I would never have thought of doing that - and look how awesome it is! You are so inspiring me to get out of the rut! But I"ll never be totally wild like you!

And another thing I love is that idea for the border quilting! I can do that! Just never thought of that idea!

And that red button tree quilt is TOTALLY YOU GIRL! How cute!

I wish I could see your stuff in real life - what a show it would be!

Great trees Tonya..! When I saw the first one, I didn't think of Gwen or Freddy, it looks like it might have lived in Who-ville, and been missed by the Grinch...it would be sooo perfect in that role as well..*G*

I think the button tree is inspired...it's happy and fun and funky. Is there a quilted word across the top, I can't quite see what it is up there.

Love the quilting on the first red tree, looks like the North winds blowing...I love wind lines. Will you make a new one this year??? Suppose I have to wait and see. Finn, who should go and fix those structurally sound houses abit..*G*

I love the red tree.. It is also a good idea to make it in plaids

I think it's wonderful to honor those who inspire us. I have a few names of antique quilt makers in my idea book that I'll be crediting when I actually make the quilts.

Honoring the people that inspire us helps them live on and honors their memory.

Can you imagine if 100 years down the road someone would even think about one of our quilts and say, "That's a wonderful quilt. It gives me an idea."

Aloha and the red Christmas tree and the button tree are wonderful.

I love the tree quilt! I had a tin cookie cutter that was shaped pretty much like that! I think it got misshapen when my brother and I fought over it when we were kids..he tugged on it, I tugged on it...it never quite could go back to being symmetrical after that! *LOL* It makes a GREAT christmas tree quilt...

Tonya! Your Christmas quilts are the so fun! Makes me want to just retire all of my past Christmas decorations...and take some time off to create new ones! ;-)

For some reason, Blogger would not let me comment to your Christmas Houses post, so here goes: It exudes so much warmth for me...all of the deep red, blue, and purple colors. I love it! And the snowman...how cute!

Red Christmas Trees post: It is so fun and festive. It reminds me a lot of Patrick Lose. Maybe it's the swirls...love those! And your little tree crustie is precious! I like its upturned boughs...very flirtatious and fun!

Thanks for sharing your Christmas pieces, Tonya! Are there more?

Darcie, are there more??? Pleeeease....
Finn, the tree crusty says "Merry" across the top. Yeah, the Red Christmas Tree quilt looks Dr Seussian to me too. Another reason it appeals to me.
This is sooo unfair - everyone is waking up and commenting from that side of the pond and I have to log off and go make dinner. Humbug.

Where have I been? I haven't seen ANY of these posts on your blog!!!! I'm sorry, too! Now, I have all these wonderful ideas buzzing around in my head - love the colors and allthe things you've shown. And yes, Lucky Shie would LOVE that you used the buttons. If you don't think so, then ask Jane Burch Cochran. We KNOW she loves them. So do I!