This is as close to a Thanksgiving quilt as you're going to get from me. It's about love (something to be very thankful for) and it's in autumnal colors - lots of browns, golds, crimson and greens. It's not for me (could you guess?).

This is the third quilt I made after my Alphabet Sampler. I've just been rereading my quilt journal from that time period and I'd forgotten that this quilt had popped into my head almost fully formed. It went together easily and I still love it, even tho I'd make it a bit differently now. 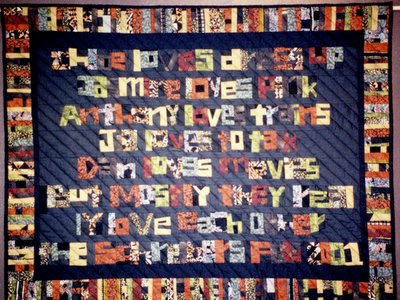 I know it's almost impossible to read so this is what it says:

I called Jill and had her play fill-in-the-blank for me with what I should say about the kids; I already knew what I wanted to say for her and Dan. I wasn't looking for anything profound, just quick and fun. I think of this as a family snapshot, capturing a sliver of time. The kids are older now (they ranged from 6 to 2 at this time) and would have different interests if this were made today.

I did play around with the idea of putting the kids' ages in: Chloe, 6, loves dress up. Chloe (age 6)... but none of the options I thought of thrilled me.

I love all the fabrics in this quilt, but there is one I wouldn't use for letters if I had it to do over. This particular fabric is very assymetrical and blotchy, with black bits in it that make it hard to figure out what the letter is against the black background. Yes, the entire background is black, just doesn't come out very well in the photo.

Other than that, I'd still choose to do the letters this way again. I know they're hard to read, but I kinda like that. I could have made it easier by putting small strips of the black background inbetween each letter and then a bigger space between words. But I like the fact that it's difficult to interpret: it's like a puzzle. One woman who knows the family well came over and was able to read it write off the bat, she had the clues to figure out the puzzle.

I would make the overall quilt bigger - it looks a bit cramped in that border when I look at it now. Initially I'd planned on doing some kind of log cabin blocks all the way around as the border, but instead I had fun just doing string piecing.

This is one of the few quilts I've machine quilted. Not very impressive straightish line quilting. That I'd do over again for sure, either quilting by hand or getting it done professionally. But this was a quickie "I love you all" quilt and I was so excited about it and just wanted to give it to them. See, it's a utility quilt of sorts. This would have been a great quilt to put words into the quilting, then I could have added in the kids ages and more about all of them.

I still like the concept of this quilt and expect to make more of them. Used to be my hubby and I were so boring, only having the two of us, but now I could add the cats in too. Habibi loves to sleep, Howler loves to eat... hmm we're still boring :)

There are other ways a quilt like this could have gone. Could have used pink fabrics for the line (or block) about Jasmine, fashion fabrics for Chloe and train fabrics for Anthony. It would give it a completely different look.

I encourage you to play around with this idea if it appeals to you. I know I had a great time making it.

I look at my pic of the quilt and it makes me miss my friends. We haven't lived nearby one another since 1989. But I'm thinking about them now. Wish I could sit and drink coffee and talk to Jill while Dan takes the kids to see the Harry Potter movie, and then compare movie notes with the latter afterwards. (Not that we're going to have a chance yet to see the movie - I'm not sure when Harry is getting here, but it's not today.)

Posted by Tonya Ricucci at 7:14 AM

Tonya, what a wonderful quilt! Ideas are spinning in my head . . thanks!

I am thinking about trying your letters to do something in the border of a wonky house wallhanging I am making with DD first grade class. Was that sentence long enough for you! Thanks for sharing!

Neat quilt Tonya, I love the concept. Would be hard to get more personal that what it says. It's rather like a freeze frame.

Point, click, freeze and there it stands, waiting for people to reflect on it.

I like almost everything you did, but agree, abit more space between the letters and the outer border would be good. I hope you will be making more in this style...and NO..your family is NOT boring..*G*

Neat quilt Tonya, I love the concept. Would be hard to get more personal that what it says. It's rather like a freeze frame.

Point, click, freeze and there it stands, waiting for people to reflect on it.

I like almost everything you did, but agree, abit more space between the letters and the outer border would be good. I hope you will be making more in this style...and NO..your family is NOT boring..*G*

Fun! What a great gift!

OH Tonya! This is my colors! I love it! And this is so funny you posted it, because I was just thinking this morning on my drive in that I had not tried your letter thing yet and was trying to figure out what words I could make to do some charity quilts out of! Too funny isn't it!

Beautiful quilt, Tonya. I love how personal and unique it is.

I have never seen this one! Have you been hiding this one from me? :c)

Just reading the words nearly teared me up. I must be feeling very sentimental. I think it's this past week that I've had with family here, and this time of year.

It's such a personal quilt, it really brings together the essence of FAMILY.

Ohhh I just had a wonderful idea for a quilt for me inspired by your "word" quilts, Tonya. Now I just need to bring it to fruition. So many quilts, so little time! Thanks for sharing these.

Tonya, you are so talented. This quilt is great. I am sure you have heard this before...but you need to write a book. You have already written it in the form of this blog.

Thank you all for your sweet comments. Bonnie, this one was in its new home long before I met ya, so you can't blame me for not getting to see this one :)