Don't mind me ya'all. I just want piecing to be easy, not to have to work at it. So when I have to think, I get cranky. I did finish one whole arm of my string star. Some of the seams were off by a quarter inch by the end of the seam. eek. 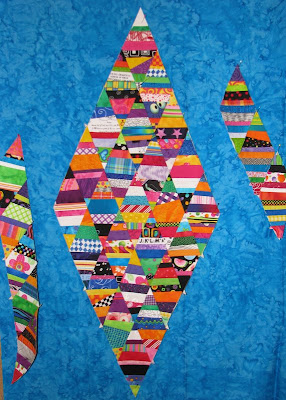 That just means more work straightening things up before sewing them together. I can do that. (Crankily.)

I discovered that I can match the diamonds better if I make tic marks on the paper backing to indicate where the seam should be sewn. I still mismatch plenty, but doing better than before.

If I hated all this work, I could just sew the diamonds into rows. This looks pretty cool too, but wouldn't be the stunner that a lone star will be. This is just me having fun with blocks, I'm not going to make this. 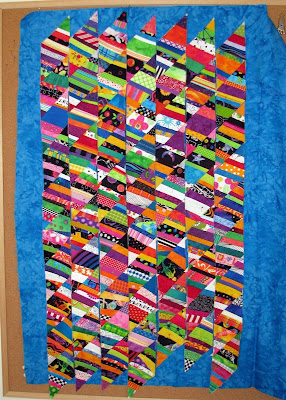 Quiltcetera commented that I'm not lazy. I am, really. I call myself Lazy Gal for my technique, rather than how much I get done. Am I going to resew and resew and resew some blocks just to make the seam match? Nope. Am I going to spend a lot of time cutting things out to exact measurements? Rarely. I like to just sew on something extra big and whack off the extra.

Netflix is torturing me. I got all my discs yesterday. Can't spread 'em out, can they. So I gotta get back to the Riches and try to do some quilting. Baby Pokey has been making that difficult - she just wants to sit on my lap. She's even letting me pet her a great deal, which is usually against the rules when she wants to sleep. So lots of kitty love and tv watching, no sewing, but maybe just a bit of quilting.

Oh, but before I run off, thanks ever so much to my fellow science fiction/Joss fans for commenting on my last post. I am really really looking forward to his new show Dollhouse. Read interviews with Joss and Eliza Dushku here. Let's just hope Fox treats it better than they have other shows...

Posted by Tonya Ricucci at 6:40 AM

lazy in some extraordinarily productive way i'd say. i am inspired by the diamonds somehow. very cool, matched or not.

Love that straight setting! Sure you don't want it rather than the star? Hope the sun is shining in Paris today.

What a fun post this is. I love the pictures and the read!

Very fun, happy. Especially with thoughts of Pokey being so open to kitty love. I'd get sucked right into that, too.

Diamond in the Rough Love, *karendianne.

What a great idea! Love the scrappy look of the star! Thanks for sharing! I am a "lazy girl" at heart.

Tonya, this will be such a fun lone star. There is so much going on who would notice an every so small mistake?

Most of my son's favorite shows were Joss Whedon productions. I suspect if I allowed myself to sit down and actually watch more of them I'd be hooked too!

Those diamonds are so wonderfully scrappy that you'll be able to do no wrong no matter how you decide to use them!

Those are such bright cheerful colors. Perfect for a winter's day.

What if you just sash between the small diamonds with black ?
That would be a stunning quilt indeed :-)
Lazy, you ? Not !

Oh Tonya - this is going to be absolutely stunning! I just love it! And you know what! I think I like it best in these bright colors! No that wasn't me who said that was it????!!!!

Good luck on trying to corect blocks which are out by only a quarter of an inch! I find that sometimes they're best left alone, because after I've resewn someting, it's just as bad, or even worse!

Very cool. looks like it would be hard to line up all those seams. It is going to beautiful all finished up though.
Vera

I so love how this quilt is coming out! We watched Chronicles last night...great TV show. Agree that it would be easier to sympathize with a child instead of a whiny teenager but still love the show.
Sio

I am always lulled into thinking pp'ing makes matching easier-when that can be far from reality. this looks fantastic-and I am sure in the end worth all the fiddling with to get it close to matching up. I went and printed off B's instructions... for this...I am not ready to do more than that for now however...but your diamonds certainly are inspiring Ton.

Wonderful! I have been playing with the idea of doing a quilt like this for years. Imay just have to start one soon!