All You Need is Love - Again

This is my quilt All You Need is Love. Pieced in January 2001 and completed in March of that year. It measures 43" x 40" or thereabouts. 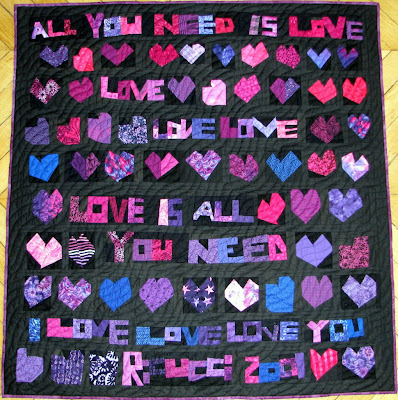 I have actually written about this quilt before, but I only had a lousy photo of it. This isn't the greatest, but you can see how I deliberately used more than one black fabric - I love the different shades.
I had no idea how this quilt was going to turn out. I played with stars, flowers, people and different ways of making words - none of which ended up in the quilt. I made these words using scraps and 1.5" strips. I won't ever do that again - I think it made my letters look boring to have the same width show up again and again.
I made hearts in all sorts of different ways. Lots and lots of experiments, most of which are here (I think only two didn't make the cut and that was because I didn't have room). Some of these hearts came out even goofier than they were initially because I sliced them narrower to fit. 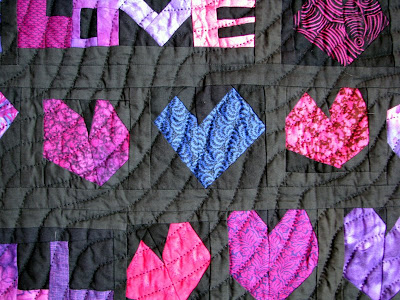 I quilted with black perle cotton size 8 in a wavy pattern. I ended up marking the lines because otherwise they flattened out. 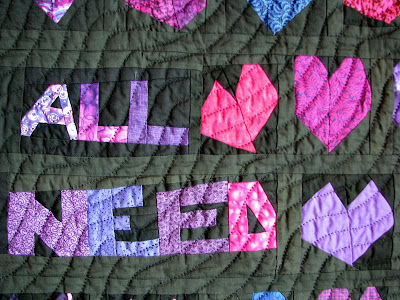 The requisite kitten on the quilt picture. Pokey: 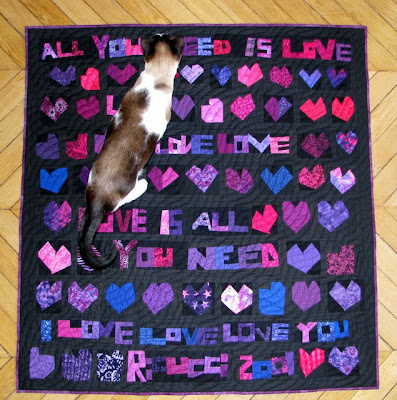 I initially pieced these four string blocks for All You Need is Love but wasn't happy with them - boring, boring, boring. They look much better in Orphan Train: 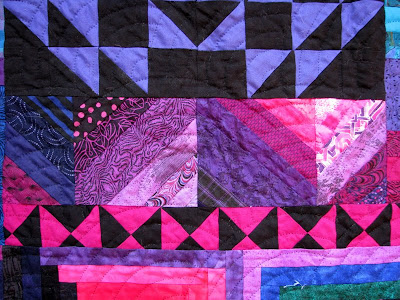 I've hit a sticking point on my String Lone Star quilt. I've left the newsprint paper foundations on and pieced several of them together. Eek, I keep getting blocks mismatched by about an 1/8" over and over. Yes, I like things wonky, I do, but still... I know I just need to keep going with it and whack off any extra I have left over. Eighth of an inch seam allowances will still work, right? 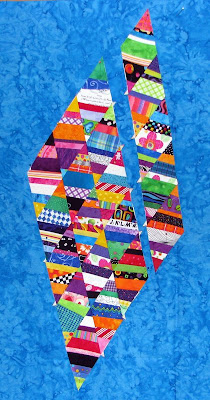 I've lost some confidence in how this quilt is going together (should I rip off all the papers now like Bonnie did or just keep going?) but not in the quilt itself. I love the fabrics, the colors, the pattern. Must just keep working. 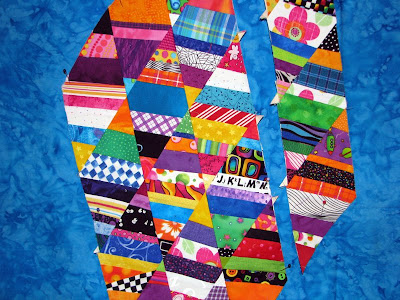 I occasionally blog surf for entries on Gwen Marston etc. I came across Jen Duncan's entry on her class with Freddy Moran. Whee, go look at the pretty pics. The best bit of all is the intel she acquired: Gwen and Freddy are working on a follow-up to Collaborative Quilting. Woohoo!

I watched a couple of episodes of Terminator: Sarah Connor Chronicles and found it thoroughly enjoyable. I don't mind the continuity "problems" with Terminator 3 at all. For one thing I didn't care for that movie much and for another, when you've got terminators going back in time to change history, nothing is static.

My quibble with the tv series is the casting of a 20-year old as John. Sorry, should have cast a real kid, which would have made him much more vulnerable. When the character whines I have a knee-jerk reaction to tell him to shut up and get going instead of empathising with a child in danger. Can you imagine the first Harry Potter movie with adults playing the children's roles? Ick.

Thrilled to see Firefly's River (Summer Glau) as a terminator - very fun. [Incidentally, Firefly still the number one tv series ever made in my opinion. Joss Whedon, please come back to tv.]

My husband and I just finished watching the entire Arrested Development series. Hysterical and unbelievably cancelled way before its time. Stupid network executives. I loved watching my husband's head spin as he tried to figure out what was going on (luckily for me, it was my second time through the series). We'll definitely be rewatching this one.

Posted by Tonya Ricucci at 3:43 AM

oh! another example of many blacks!

Amazing quilts once again Tonya, you're so inspiring!
I can't believe Arrested Development was cancelled - I just loved that show - it was laugh out loud funny.
*hugs*
Tazzie
:-)

eighth inch seams will work ... if you're really concerned run a line of fray stop along them as you find them... WORST CASE, the seam pops at some point and needs a patch of a strip of fabric sewn over it....

Heck, if you're really worried you could re-seam the line without pulling out the old seam and just take a little bigger nibble....

Elaine Adair said...
This comment has been removed by the author.
8:52 AM

Ohhhhh myyyyy - so much eye candy - and so delicious! Thanks!

We're finally getting trailers here in GB for the Terminator Chronicles. Hunney is right there with us. It starts next month I think.

Keep going with that star, it'll be fine, no matter what you do, you'll make it work, I have every faith in you.

Love the string Lone Star. I am amazed at the fixes that some can come up with, so I you'll get it. Looks great!

Tonya ~ you MUST, absolutely MUST, do whatever wonky thing it takes to assemble that utterly fabulous string lone star... the colors, oh those colors!!

Thanks for sharing the link to the Freddiedotcom quilt. Just wish we had an Ikea store near Memphis!

Cold and gray here - so thanks!! for the wonderful colors!

FYI joss is working on a new show with eliza dushku / called "dollhouse" / probably on next fall (in the US).

I love looking at all your quilt pictures, you are amazing! I love the lone star!! It is gorgeous!

I love the stuff you do! I always seem to be off by just a smidge in my quilts no matter how carefully I cut and piece! I am also a huge fan of Joss! I have all of Buffy and Angel on dvd and watch episodes when quilting! I like summer as a terminator, but don't by the boy either! Anyway, glad that I am not the only one that loves Joss. My quilting friends laugh at me sometimes when I say Buffy is my very favorite show.

I love the curvy line quilting! Thanks for the link to the Gwen pics!

Love,love, love all the colors in the quilts in today's post, Ton. It's grey and rainy here in Oz today (again!!!) so it really lifted my spirits.

And thanks for the recommendation of Arrested Development...it's in my queue at Quickflicks now!

Arrested Development is a riot! My daughter owns all the DVDs and we watch them over and over.

You have a very low threshold for boredom, don't you?!?! I wouldn't call those letters boring, but I am definitely glad you keep pushing the envelope for greater interest. The hearts are all the better because they are so crazy. It's like beating hearts all over the quilt!

Oh so much good stuff you posted here today, so much yummy yummy stuff. Let me go grab my cup of coffee to sit back and soak it all in.

Love the quilting...I think that I might need to start doing it by hand too...
OK, the new Sarah Conner...I just wanted her to look a bit more like she could take you down...like REALLY TUFF! Linda Hamilton was just so ripped and this woman just looks a bit to nice.... I know they show her doing chin ups and blah...but this actress just doesn't have the bad to the bone look, BUT it is a good show for me to sew leaves on my tree to, and my husband REALLY likes it on his big TV. (and oh, yes Joss ROCKS!)

Hey Tonya, check out this link to Wikipedia: http://en.wikipedia.org/wiki/Dollhouse_(TV_series)
It tells the scoop on Joss' latest effort. I wish he could do more Firefly, tho. *sigh* I'm still working on Buffy - only up to Season 3. Missed it the first time around. But Summer is great on Sarah Connor. I think she totally steals the show!
Thanks for the link to see Jen's pix from Freddy. I love her quilts! Got to see her and Gwen together in Oakland, CA, and then their quilts here in WA last spring. It was inspiring!
And, not the least, I love your quilts! I love the wonky hearts, and I love your colors! YOU are very inspiring! Keep going on your string star - it will turn out fabulous. You could always use a little fusible on the seam allowance to get it to behave.

I never imagined you of all people would mind mismatch blocks. Keep going. Those colours are awesome!

Don't ask me anything about TV. I'm so out of touch with everything these days!!!!!!!

Top teens today and I can "smell" Spring. Fascinating programme on France 3 last night about the area around the Champs Elysee and it history.

I am just impressed you are tackling a lone star- let alone matching any of it up! brilliant colors Ton..and I am sure you will sort out the matching up issue...I think I spotted a few familiar fabrics :-) totally awesome that Gwen and Freddie are doing another book...thanks for the advance warning.

The hearts quilt is wonderful! I think the Lone Star will turn out wonderful! I don't think I'd ever be able to match anything up on one of those. Wow! Freddy and Gwen with a new book? Sign me up!

Please keep going on that quilt! Trust me no matter how wonky and wobbley it gets I know a machine quilter who can get it to lay flat! (it worked on the star quilt for my Mom that had been in a bag and moved around for years...not good for the bias edges!)

Terminator Ch. start next month...can't wait. Even I can only watch so much Law and Order....

Love the love quilt!!
The Sarah Connor chronicles start in the UK tonight - woo hoo!! If you hadn't mentioned it on your blog I might never have noticed them because they are on an obscure Freeview channel. Can't wait to see the first episode :)

I'm with Bonnie -- I think it's much easier to match seams of paper-pieced blocks if you take the paper off first!

I love your quilting on the 'all you need is love' quilt. The pattern feels like waves.

I've always loved your "All You Need" quilt! Makes me want to go out and buy some black to see how it will set off all my scraps!