This is Scary Christmas (Happy Boo Year) which I completed in August 2001. 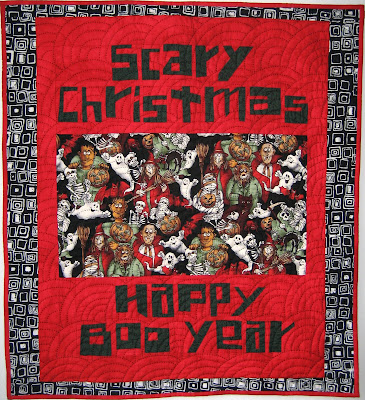 It measures 24.5" x 27" or thereabouts. I quilted it in unmarked fans using perle cotton size 8. I think this is the quilt where I learned that it's easier to do these fans when they are closer together like this at half an inch apart. Hmm, lately I've been making that initial arc really small too, but I like how it's bigger here... 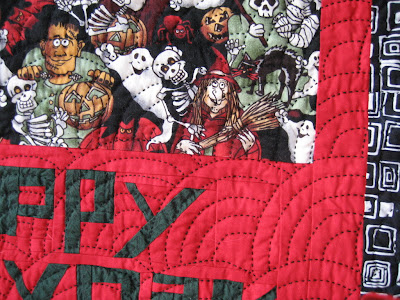 This quilt was completely inspired by this fabric which is definitely for Halloween. But wait - reds and greens - hey that's Christmas! This fabric also featured heavily in this quilt. 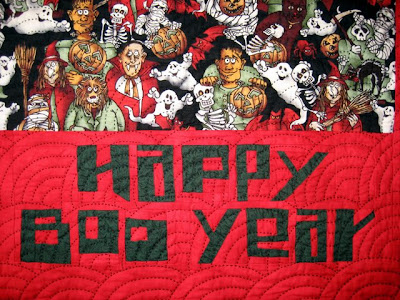 Not to get all serious on you, but I have to admit I had a hard time looking at this quilt after the attacks of Sept 11th which occured not all that long after I'd completed it. Suddenly the idea of a "Scary Christmas" just wasn't in jest anymore. Halloween is supposed to be the time to make fun of the things that scare you, you're not supposed to actually be fearful.

Back to happier thoughts, one more photo of my gorgeous girl: 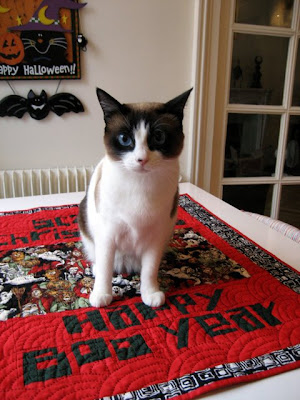 I love Halloween-meets-Christmas crossovers. In the past I've seen some great one-of-a-kind papier mache Santas holding jack'o'lanterns, but can't find any at the moment. I also love the concept and look of Tim Burton's Nightmare Before Christmas although I don't think the movie was as good as it could have been (too many boring songs and I hate talk-singing). 4 out of 5 for me. Jack Skellington rules though and I love the Oogie Boogie Man - he steals the show. Oh and the three kids whose names completely escape me at the moment - they're great too.

Did I tell you all that I tried watching Ghost Rider with Nic Cage. Bleck. Hated it, was bored, quit after the first half hour. Why do film makers always think the first movie based on a comic book has to be the origin story? What does it matter how the super hero or villain started out? Let there be some mystery to it and get to the kick-ass action.

I listened to Alex Anderson's podcast in which she interviewed Annie Smith (episode 69) and the one thing that really caught my attention was when they were commenting about how not having advertisers means you can use whatever rotary cutter you want etc. You aren't ruled by market forces. I kind of feel that way about doing my classes. They are informal and I really feel like I can be myself. I can be goofy with Santa Aliens or whatever and not have to worry about would anyone buy this. If ya'all want to be goofy too, you can be and if you want to to be more serious, that works too. We don't have anyone to please but ourselves. Great isn't it? I do love the internet.

I really appreciate everyone who has signed up for the winter class. Although maybe I shouldn't call it a class since there isn't any traditional instruction. the winter get together and motivate each other to get quilting thing.

Posted by Tonya Ricucci at 9:24 AM

This is great! I've got to give those letters a try.

The internet has been a liberating force in many ways. It's so nice to "know" a group of like-minded quilters. The encouragement we get from other bloggers is invaluable. It's nice to know its fine to be wonky.

It's a gorgeous quilt. Black, white and red - very, very good colours together! I understand why you feel a bit 'funny' about it though.

Cool re your class too...if only I had more time!

halloween meets christmas - you definitely need to come to cleveland one year! it's CRAZY.... since mid oct folks start decorating their houses with halloween, thanksgiving and christmas stuff. tonight coming home from the local pub we passed two houses with trees lit up in the front window....how I wish I had my camera. it's not event thanksgiving. as I said crazy!!!

OMG! I went away for the weekend and it's taken me a few hours to catch up on my email now that I'm back. In the meantime, hubby and I watched Ghostrider! He figured I'd like it because of Nic Cage (yes, his presence did keep me from just continuing to read blogs without EVER looking up). My big beef -- why was there no credits given to whoever designed/built the motorcycles? With the up popularity of Jesse James/West Coast Choppers and the Orange County Choppers guys on TLC, you'd think they'd jump at the notoriety. Hmm. Maybe they need a better rep. Oh, and as long as were talking confluence of DVD watching, is it just me, or does the last season of Babylon 5 suck in comparison to the previous ones?!

Lock,shock and barrel were the kids from NBC :)
It's funny you should mention Jack as DD is trying to draw him out for me as my winter quilt theme

Need To Boost Your ClickBank Traffic And Commissions?