This is one of the most impressive monuments at the Montmartre Cemetery. It belongs to the Laurecisque family. 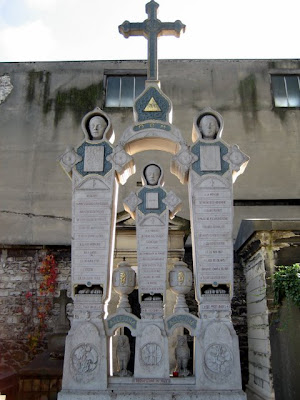 The woman is Francoise, who died at the Palace of the French Embassy in Constantinople in the year 1847 at the age of 24. That's my interpretation anyway. 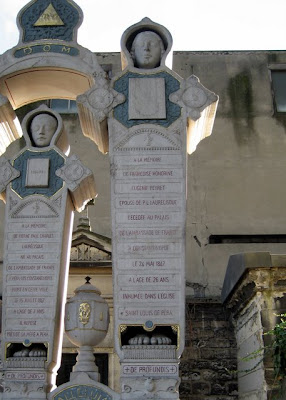 I love that the feet are represented as well as the heads. I'm really surprised at the presence of a bat. This entry in Wikipedia says bats are a symbol of death because they are nocturnal. Boring answer. 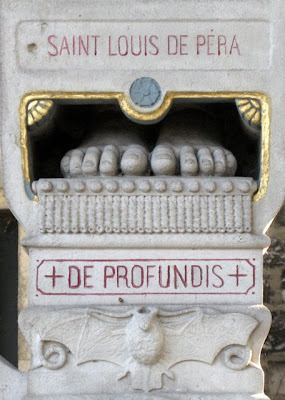 I've also seen a few owls on the monuments. A paraphrase from Wikipedia to the rescue: The Romans, in addition to borrowing the Greek association of the owl with wisdom, considered owls to be funerary birds due to their nocturnal activity and nesting in inaccessible places. 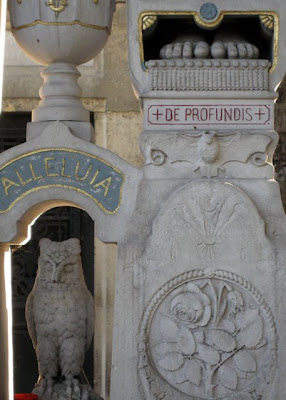 Pierre was just 7 years old. That's a Book of Hours on his chest.

In my last post I featured cats, so this time here are the dogs of the Montmartre Cemetery: 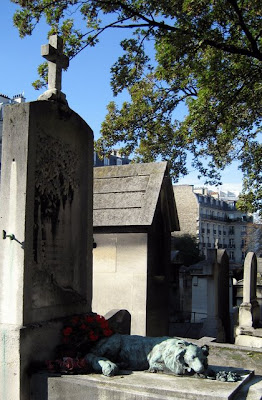 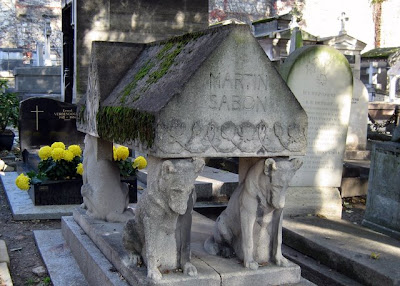 Okay, don't get mad, but I'm including this woman under the category of "dog". Look at that slavish devotion - makes me a bit ill. 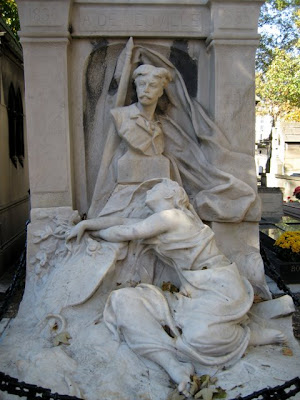 I am bumming at the moment. The water was scheduled to be off yesterday, so I forewent a shower. No big deal. For some reason we don't have water again today -aaaghh. My hair is a fright. Maybe this is the push I needed to go get my hair cut.

I finished watching Veronica Mars Season 3 last night. The show has been cancelled - another reason for my bummed out mood. I LOVE that show, I am so ridiculously attached to the characters. Veronica and her dad had the most believable father/daughter relationship on tv. I loved their interplay. Okay, sure I'm glad Kristin Bell is now on Heroes, but she won't get nearly the role she had before.

All the fans get out there and buy the DVDs, and if you haven't tried the show, do so. Do you like mystery stories? Smart women with snappy pop cultural references (I'm looking at you Buffy and Gilmore Girl fans)? Then try it. Please.

What else besides my sliminess and Mars-lessness? Yesterday I took a big long walk, hoping to get some Christmas presents in the Marais. Of course the store was closed. May just head back there today.

Ya'all were asking about arrondisements. Paris is divided into 20 sections, called arrondisments. They spiral out from the center of the city. I live in the 8th, which is very "bourgoise," and contains the Champs d'Elysees and lots of really expensive stores. Not right where I live mind you. I think I walked through something like four arrondisments yesterday - no wonder I was so tired.

Speaking of expensive, I can't believe the prices on the craft items here. Yes, I knew fabric was outrageous at 18 euros a meter (something like $25 dollars for a bit more than a yard) but DMC embroidery floss, which is manufactured here in France, is priced up to 1.6 euros a skein. That's A SKEIN. For regular embroidery floss, not the neon or the rayon floss. Over $2.20 for a skein? That's not just the lousy exchange rate. Skeins are routinely less than 30 cents in the States and if you find a sale it can be 20 cents. Ouch.

I know that's not completely fair. I'd then have to pay tax (or shipping charges) on the skeins - something up to 8% - I don't know of a state where it's higher than that. And the french price already includes the tax - what is it, 17%? I'm no mathemetician, but that still doesn't add up.

I assume it's expensive for the Europeans as well. If so, I'm amazed there are any fiber artists and crafters at all in Europe. What's the average salary in Paris, anyone know?

Posted by Tonya Ricucci at 4:27 AM

This is why I haven't jumped on the crafting with linen bandwagon -- I don't have any in my stash, and I'm not paying $30 per meter just so my daughter can have an up-to-the-minute smock. My German friends often ask me to share my DMC good fortune with them as I pay $.70 per skein on post. Oh, and when i left California 11 years ago, I'm pretty sure the sales tax was 8.75%. Oh well, at least the 18% value added tax here in Germany pays for low income housing, decent medical coverage for all, roads in good repair, etc, etc. It's not perfect, but I can see the money being put to use (kind of like the difference between DC and Northern Virginia).

I just love your tours of the city, thank you and keep them coming. That is the strangest looking monument I have ever seen. Did the whole family die at the same time? Did it say why? Facinating stuff.

That is a stunning memorial. The toes are such a great detail.

We could start sending crafting care packages to you :D

It's taken me all day to comment on this so it had better work this time!

Having never bought DMC anywhere else, I had no idea it was so expensive over here, but I'm not paying that much for ordinary floss. About 1.20/1.30. Over 2.00 for the glitzy stuff and nearly 2.00 for the varicolour ones which I love and think have more effect that the plain ones. Where are you buying it from? The craft shops are much more expensive that the department stores (Galleries Lafayette par exemple). There are cheaper versions of floss, but the quality isn't as good and they tangle.

Tax is about 18.something% and can't help you on now much Parisiens earn. All I know is the wealthy ones have got maison secondaires down here!!!!

Agree with you about the woman - simpering doesn't come into it!

Pourquoi sans l'eau? They must be cleaning the pipes or something. They do that here sometimes and the water comes out white white white when they have finished.

Oh my gosh! I just bought a handful of DMC floss at Michael's for 33 cents a skein and I'm sure they have sales when it's much cheaper. I also bought some variegated skeins and some linen and I think those were about 1.39 a skein. We also have no sales tax in OR so it's a pretty good deal. I was thinking that when you do your gallery in a box thing I could send some along for you. Just let me know what you need!

By the way, that is one of the best monuments you've ever shown. I really love the bats and owl!

I'm trying to think how much a skein of DMC or Anchor thread costs in our local craft shop here in the UK - over £1 springs to mind but I may be wrong - that comes to about 1.5 euros - it's not cheap but I've found it on the internet from British suppliers (less shipping etc) for 46p / skein which is about 70 euro cents

These are the best cemetery monuments yet. Ours in the US seem so unimaginative next to this.

Not only expensive but difficult to come by. Thank goodness for mail order. The only craft shops around sell fancy papers and bits for scrapbooking.

Wow. Bummer about the price of floss and fabric, etc. I second the care package offer!

Love the first cemetary dog you shared. That's the kind of thing that brings tears to my eyes.

I third the care package offer - what colors do you want/ need??? make a list and we will shop :)

I remember a joke about a French cemetery, but now that I see your photos, the joke means nothing at all. The amount of carving is amazing. Stone carvers in France are wonderful, aren't they?
The joke went something like--a woman's husband was so tall that when he would enter a room, everyone would say "amazing!". He was a wonderful husband but he was so sick of everyone saying "amazing!" When he died, his heartbroken wife erected a really beautiful grave stone, and whenever anyone goes to the cemetary and sees that stone, they say "amazing!"

Those monuments are amazing! How does a family arrange to get them constructed? Do they get built up 100 years after all the family is dead and gone? Look at the cost of those things - and how much room they take. Aren't the cemeteries all filled yet?

I am amazed at the cost of fabric and embroidery stuff! Aren't those things actually manufactured in France? Very strange ...

I soooo enjoy your tours - please keep it up.

Love, love the photos, most particularly the toesies. And the owl and bat. Wonderful. It's such a shame that textile items are so much more expensive outside the US.

That's why i sent my friend in Paris the entire DMC collection of floss for Christmas one year! I got it for
.20 each skein. She had sent me a beautiful cross stitch picture she had done and told me how much floss was over there so I worked on getting her one of everything!

eToro is the #1 forex broker for beginning and advanced traders.