I've got my trees made, the words "Joyeux Noel" (including the umlaut over the e - that is what those dots are called, right?), and a sample set of piano keys (which may be for a border or sashing here or there between the trees). Now I just have to decide on the setting. This is how I had it yesterday: 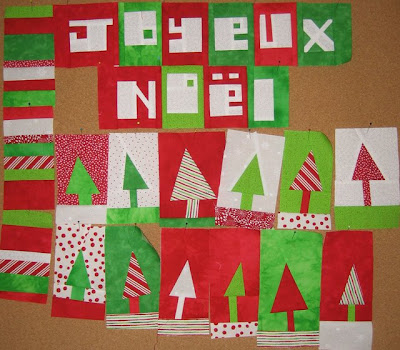 And then I thought today that maybe I should have the words in the middle with a row of trees to the top and bottom: 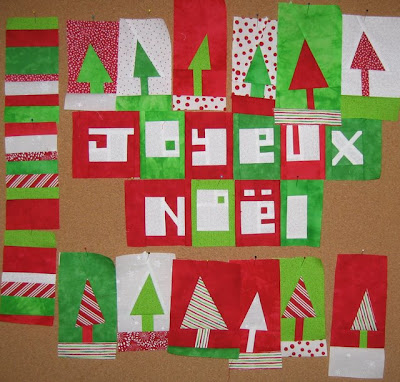 I like the first pic better, but haven't made any firm decision yet. I'm trying to keep this quilt smallish.

I have a book recommendation for you all. Color: A Natural History of the Palette by Victoria Finlay. It's not just a book about colorful pigments and dyes (which would be fabulous enough) but also about travelling, history and art. Ms. Finlay is incredibly adventurous, going into Taliban-controlled Afghanistan on the hunt for lapis lazuli for example. She actually saw the large Buddhas of Bamiyan before they were destroyed. I love this: "The peaks in that area were like children's drawings of mountains. Or perhaps they were even more basic than that--scribbles made on paper to check that a pen works; impossible jagged crags glowering over the horizon."

And this bit is a hoot: "In the eighteenth century the main source of urine for the whole of the English dyeing industry was in the North. History has rather generously rewritten the story of Newcastle upon Tyne, and credits the city for exporting coal and beer. But two hundred years ago its citizens peed for England. It seems extraordinary now to imagine first that London could not provide its own natural resource, and second that Newcastle should have organized an efficient system whereby its people would have been--presumably--paid pennies while spending them, and where pots of urine were transported around the courntry by ship."

You can read an excerpt from the book and an interview with the author here. I give the book 4.5 out of 5. Remember how I read the book A Perfect Red not too long ago? If you haven't read it yet (and you really should), I'd read it AFTER reading Color. I was a bit bored in the red chapter and I'm sure that's why. And if you have read either of these books, how did you like them?

Email ThisBlogThis!Share to TwitterShare to FacebookShare to Pinterest
Labels: books, my quilts

I really love the quilt. Either setting looks good to me!

I've read that book on colour and it is very good. I can highly recommend it.

My vote is for the first version. Joyeux Noël stands out better that way I think. I wish I could read more 'cuz I'd definitely try those two books.

I like the first better too but both are great. I haven't read either of those books but now I want to!

I seem to be in the minority here - but I like the second one a little better. (And yes, it's an umlaut in English. In French I think it's le tréma.) Either way, you can't go wrong with these lovely bright colors!

look up Umlaut (diacritic) for answer to the double dotted question.

I like the second one better too. Love the chartreuse!

Well, that's the most enjoyable quotation I've heard in a long time lol.

I love this quilt - the 2nd layout is my favorite of the two.

I like the first layout -- don't know why, just do. As for the books, another recommendation to check out at the library!

I love your quilt so far. I think the second layout is best.

I'm currently reading The Perfect Red and really am enjoying it. Not only am I laerning all about how the color, but my knowledge of history is certainly improving as well.

thanks for the book leads - off to check to see if the library has them and if they do put them on hold. happy thanksgiving! gobble, gobble..

Happy Thanksgiving, Tonya ~ I have the COLOR book, it is amazing. Have not picked up The Perfect Red but I will soon.

I vote for the second layout. No matter which version you go with, HAVE FUN!!

I see that you're quilting in French now! I think I will try to make a wall hanging in another language, too. And the story about the urine is so funny. One of those sad but true kind of things. I must check my library for that book.

Umlaut is the German word for the äöü letters in German. Not sure if that got integrated into English, but I am sure the French would insist they do not have Umlaute. (e with dots not being German I would guess that the earlier commenter is correct in calling it le tréma).

I like both, but think the trees should stay together.

Thanks for the pointer to the book. It sounds fascinating!

fun trees and letters! another great wall hanging in the making..those colors certainly are merry.

Somehow I missed this post earlier. Hope it's not too late to give my input on the quilt top. Did you try having the words in the middle and the trees surrounding them like a border?

Would love to read both books. It's hard to think of taking time out to read right now though. I'm having enough trouble keeping up with the blogs (obviously!).

Mmmm - I'm loving this one! I like the top pic for some reason too.

can I take some classes with you over the summer? I really enjoyes your work...
Your bog is trully inspiring, i am taking your link to mine..
larondademarci.blogspot.com
you can email me
at marcitricallota@gmail.com
i am in Gainesville, hopefully you are nearby...or if you know where i can learn...