Life is going well. I am almost almost almost finished quilting Terms of Endearment, which is exciting. I really love working on that quilt. Next up will be finishing up my beady project which is hanging over my head, and then back to quilting fans on Cranky Witch. Since Halloween is coming up, that should give me motivation to work on it.

Thought I'd show you some pics from how I originally started working on the Challenge quilt (before realising it was too challenging). I made the X and O blocks in a much wider variety of sizes and with lots of angles. 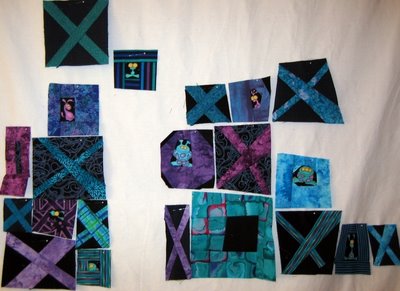 And then figured they'd go together in a much more liberated, utility style. Adding more fabric where necessary, chopping off bits of extra - including slicing up the letters. Not that I got as far as putting them together - I needed quite a few more blocks. 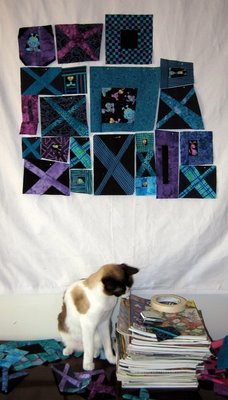 This is actually still an option for anyone who REALLY wants a challenge. But you'll need to make far more blocks than I originally called for - that or make really big ones. I really struggle trying to make larger letters. For whatever reason, the smaller the better for me. 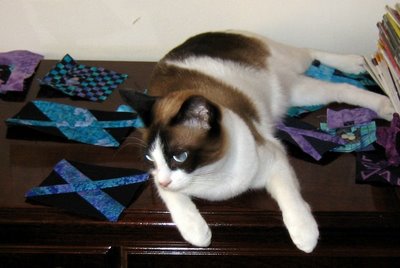 And here is baby girl Pokey doing what cats do: getting in the middle of whatever is going on.

My friend L. gave me leftover items from her pantry and freezer. What else was I supposed to do with corn syrup, pecans and Cool Whip but make Chocolate Pecan Pie. It was a new recipe and not great, but I still ate waaaay too much of it. I blame her for any extra pounds I acquired.

This is embarassing to admit, but I've been watching Rockstar:Supernova. I know the final band is going to play music that I hate, but I still love watching the competition. And drooling over the mansion they're living in - I so want that view. Love how it's decorated with Persian Carpets, big heavy furniture and middle eastern lanterns, etc. So cool.

Still enjoying Bones. Watched one and only one episode of "The Ghost Whisperer" and absolutely hated it.

Medium just started it's second season and I like that one as well, tho I wish it were scarier or spookier. My hubby gets cranky because they use plots from Sherlock Holmes only instead of using deductive reasoning to solve crimes it's all mumbo-jumbo. I love Jake Weber, the guy playing the husband (completely thankless whinging housewifey role) - he was so great in the "Dawn of the Dead" remake.

For some quilting links, Cher finished her incredible village quilt - go check it out if you haven't already. The longarmer did a great job with the quilting - I love the elephants.

And Passionate Quilter Karen has the top pieced on the very fun Flamingo Lounge. Her group is going to have a great quilt retreat with this as the theme.
Posted by Tonya Ricucci at 2:46 AM

Email ThisBlogThis!Share to TwitterShare to FacebookShare to Pinterest
Labels: Cats, my quilts, tv

love those big X's and O's! I noticed little gremlins creeped into the middle of some of them! hahaha

I may have to play your X's and O's game now that I see these off sized ones! They look soooooo much more interesting to me, even if more difficult in the layout stage :-)

great comments on the X's and O's- and thanks for the link-Bones is a favorite and Medium too-I too like Jake Weber, he does such a great role in that show. Of course no tv watching beyond women's basketball as it's all reruns right now.
can not wait to see the completed terms of endearment-the bits you have shown have been wonderful Tonya.

I really like the wonky sized ones - but don't know if I could do that.

Bones is one of my favorite new ones from the season, my DVR usually is very full every week from all the shows I like to watch. I watched only one Ghost Whisperer too and didn't like it either.

Wow, what a great post. All kinds of things to check out. I love Pokey!

I really like these. I see BIG wonky letters in my future ;-)

Like the little aliens/gremlins between the X's and O's. I'm surprised some of them aren't the feline variety!

What is Pokey checking out by the masking tape? Somebody found a spidey?

In bloglines (no pictures) I was reading that you had a beady hanging over your head... when I clicked on the link, I was expecting to see a pic of YOU, with the beady you needed to work on... lol

Love the picture of Pokey!

Love the colours of the quilt too!