If It's Not One Thing

In the immortal words of Roseanne Roseannadanna, "if it's not one thing, it's another thing." Now instead of waiting for the guy to come and fix the air conditioning, I'm waiting for a plumber to come take care of a leak in a sink drain. Sigh. Of course the contact number they have is the home phone and since we have dial-up I really shouldn't be on the internet.

The a/c has been fixed tho. The janitor climbed up a ladder and scrubbed down the coils and other assorted parts with a big brush. I'm sure it will have problems again soon, but hopefully not until after we depart.

When I get stressed out, there is nothing better than quilting. I was stressed out this week big time watching the news about the airline terror plot. Alleged plot. Worrying about Siobhan getting to England safely, worried about me getting home with hubby, assorted felines and documents. It's one thing to be in your home country when there is a big scary event going on, it's another to be really far away. Can't just hop on a plane and get home quickly if there's a problem and driving is certainly out of the question. I wonder if the QE2 allows pets...

As I was writing this post, I received an email from Siobhan (of Scraps and Threadtales fame). She, her hubby, and her pets arrived safely at Heathrow on Thursday. Lots of delays, but no problems.

Anyway, I worry and stress far more than I should. So instead of getting things done, I've been doing my hand quilting. I am almost finished with Terms of Endearment. This is all I've got left: 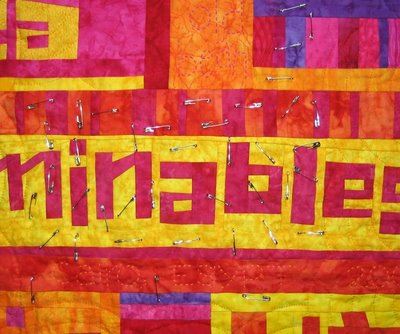 If you look closely at the bottom of the pic you can see where I quilted in "Cairo, Egypt 2006" with the embroidery floss.

I've finished the fourth round of fan arcs and am halfway through the fifth. Pretty cool.

I took photos again when I was in one of the corners where the stitches show up really well. Here I am on the fifth arc of this set and I'm getting near to running into another set of fans. 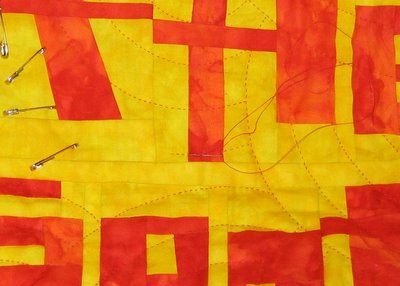 In this pic, I've finished that set of six arcs and filled in the gap with partials. And then I just started again on my next set of arcs. 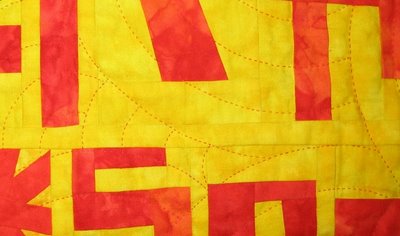 A few fun places to check out on the web: Quilting Rush Laurie Ann has done a couple of name banners using her own version of free-pieced letters. I love the way she made her M and the W is excellent as well. She's given me some ideas to play with.

Actually-living-in-France-now (as compared to a wannabe like me) Clare has constructed her first house block with French doors no less. And Scraps in Progress Fiona has made a couple of great brightly colored houses.

Hang in there...Your hand quilting is beautiful. At least your channelling all the stressful energy. It's tough worrying about the ones you love. I just printed out the house instructions..I'm gonna give it try.
Have a better week.
melanie

There is certainly lots to worry about in the world these days. Good thing there is quilting to take our minds off everything. I really enjoyed your close ups. I have very little experience hand quilting so it's interesting to see what someone else has done. I am about to start hand quilting my Double Irish CHain. THat is going to be a long project because I marked it with quite complex designs and fairly dense quilting. Oh well, I am in no hurry.
Good luck with all your moving and pets etc.

the quilt is beautiful - love the fans!!

The quilting is looking good! Did you see Bonnies scrappy amish strippy! I loved it! I'm off now to quilt too - even though I'm exhausted from moving Adam to college yesterday! Long story, long day and lots of work. Oh and long drive. So I'll just keep it at that!

Hey Ton, just going to say once more how happy I will be once you are out of Egypt! Has to have been a very scary time for you...that fighting is way too close and now the terrorist threats again.

Glad you have Terms to be quilting on. I'm stuck with just Frankie in the quilting dept. and I'm dragging my heels.
The fans are looking great. And I did pop over to Clare's and leave a comment. Glad to hear Sio and Company have landed in England ok. Take care, Hugs, Finn

Oh, Tonya, your hand quilting is so pretty, love the contrasting colors.

Your quilting is beautiful... someday I will try handquilting... I would think it would be very soothing.
I hope your traveling is pain free and safe.

Aren't we all so lucky to have a wonderful pastime to take our minds off the troubles in the world for a little. Your hand quilting is just divine. You get so much done! I love to hand quilt, but it takes me soooo long.
I'm glad Siobhan made it safely. I'm sure we don't mind the delays as long as we can make it in one piece. My friend Linda travelled from the UK to US on Monday. She just missed all the worries.
*hugs*
Tazzie
:-)

Your Terms quilt is looking really good - I especially love the fans, I may just have to try that on my next quilt. But on my machine.... lol

The quilting is looking good - such nice even stitches and I like the way the fans come together.

Things are already blowing over at the airports here. A friend went to Seattle Saturday morning and she had forgotten a lipstick in her purse. The inspector opened it, looked at it, closed it up and dropped it back in her purse. The day before, they were taking them.

Things seem to be calming down on the airport front. I've just heard on the BBC that hand luggage will be allowed on board again over the next few days, though they are still being cautious over liquids and stuff. Mum finally got to fly out to Poland n Saturday instead of Wednesday.

Your comment about the QE2 has made me wonder if the Transatlantic route could make a come back. Wasn't it Southampton, Cherbourg and then New York?

Terms is really lovely and your stitches are so even!

I've made 2 more houses, but can't upload photos at the moment.