This is the name tag I made when I belonged to the Pieceful Heart Quilters. It's a crusty (heavily encrusted) and measures 4.5" across. 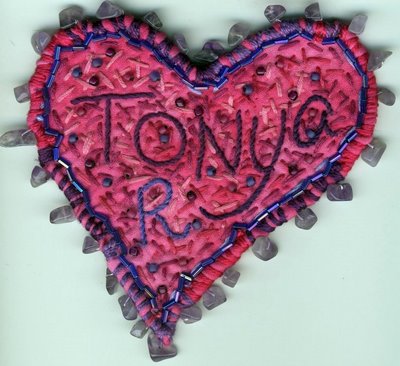 This is a quickie post - our air conditioning has been on the fritz for the last day and a half. Again. Since the computer is in the heat zone, I'm not spending much time on it.

I was actually fairly productive sewing and ironing yesterday - over in the cool side of the apartment. Not stunning amounts done, but progress.

Found out just how skittish the cats still are when I put the boys' canned cat food (a relatively rare treat) down in front of their cages and they hightailed it under the dining room table. I eventually moved it into the kitchen and Bibi finally skulked in and ate both his portion and Howler's.

Back to the previous post about quilting knots on the back of the quilt. No one ever taught me to do it that way, believe me. I was told the "right" way to do it was to pull the knot in through the top but the first real quilt I made (the poly-cotton blend fabrics with polyester batting) ended up with all these little holes that the batting oozes out of from where the knot broke through the surface. That, combined with the snags and runs you can get in fabric convinced me that was a bad way to do it.

Plus I hate being told what to do. If I don't see a good reason to do it, I don't bother. Have to learn some lessons on my own. Anyway, I quite like QuiltPixie's idea of leaving a long tail of thread in the batting and then quilting back over it. I'll have to try that.

Karen, we've lived in Egypt almost 3 years.
Posted by Tonya Ricucci at 12:57 AM

Oh that's a good idea of quiltpixie's too. Thanks for letting me learn your lessons too :)

Sounds like it's hot just about everywhere except here! Glad you could still be industrious despite the heat.

QuiltPixie's idea is the way I finished off my first quilt and the stitching has now come undone. However, that may have something to do with the thickness of it. On the last quilt did I did "a Tonya" and knotted at the back. Bearing mind the material is blues and red and the cotton was blue, it doesn't show.

Will give QuiltPixie's idea another go one of these days.

I can give you another good tip :-)
If you, when you pull the knot through, rub your fingernail where the knot is supposed to pop in, it pops in easier and you rub the hole shut when you are at it. Kristin's wall hanging made my head spin and I have a letter idea I have to try out soon. Thanks for sharing :-)

I love this name crustie...it turned out so fun. poor kitties...

I have seen any number of antique quilts with knots on the back. There was a southern Utah quilter who raised her flax and cotton, spun her thread, wove her fabric, made quilts and had knots all over the back, to name one. She made gorgeous quilts and it doesn't bother me, or the historians, when we see those knots.