I do not understand how some quilters can make huge bed-sized quilts over and over again. I just find it horrendous to work on a large scale. And that was even before I had cats. 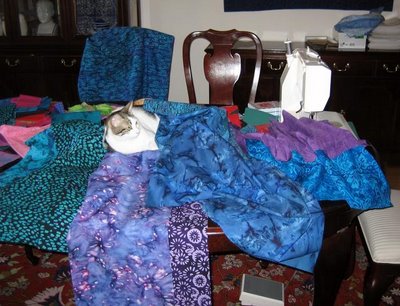 I guess I should be glad that Lily was playing in the pool of fabric at my feet as I was at the cutting table (much safer for her, tho still pesty). She then found a comfortable spot as I was sewing the large bits of fabric together for my backing. Turns out her favorite basket was under the pile. 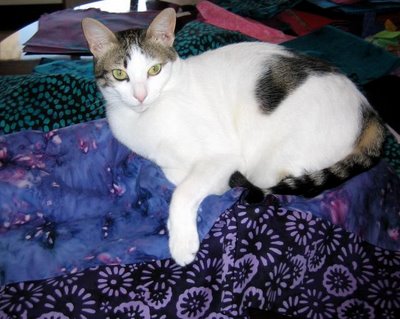 Doesn't she have the daintiest little legs? She was a skinny kitten, we rarely saw her eat and she was (and is) a yacker. (A regurgitator, does that sound better?) We called her The Supermodel. Now she has a thick torso. Not fat, not at all, she's just built solid. Still has the gorgeous gams tho.

So I'm making progress sewing the backing fabric together. Using up the batiks that I still find mostly gorgeous, but am no longer interested in working with on the front of a quilt.

Aussie Lily, I'm not worried about the seams being straight on the back (that doesn't bother me). But I need to be able to join the bits together so I have to cut the fabric relatively straight. My infamous V-cut superpower cutting skills do not help. I end up with waves that I then have to straighten...

I made brownies the other day. I am now officially out of sugar AND corn syrup which I had to use as a substitution (note to self: never do that again). Didn't turn out the greatest and I'm hoping I have the willpower to throw out the rest rather than eating them anyway just cuz they're chocolate.

Another quilt blogger has joined our midst. Say hello to Brigitte in Duesseldorf, Germany. I was telling you about her in my last post and I'm thrilled she's made the jump into bloggerdom.

Creatively Minded Pam has used the wonky letters to great effect with a large piece of fabric. Who'd of thought there'd be so many cats out there who like to sleep in sinks... (That last bit will make sense if you go check out her site)

Jenny at Three Ring Circus Quilting is making a challenge quilt. She's got some great colors and different sizes of Xs and Os - gonna be fun to see how they go together.

KCQuilter Vera has made a great Halloween house (her first wonky house) and explains how she appliqued BOO.

Cats may be missing the charity boxes -- I'm certainly not -- but they're making do. I threw the sheet over these ones so that my little chewers wouldn't destroy the cartons. This is Habibi, King of the Mountain. 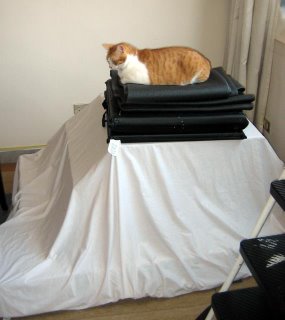 Posted by Tonya Ricucci at 2:19 AM

Hey there Tonya, I'm thinking that maybe Lily was royalty ... she has a very regal look about her. And I was wondering, since we have a language thing going ... I haven't heard of gams ... is that from the Italian for legs?
What is the backing for? I love all the colours on the table there, you have some lovely fabrics!
Have a great weekend
*hugs*
Taz

Beautiful fabrics! Do all quilters have cats? Everyone's pictures make me miss mine!

Well, you have to have SOME bed quilts, enough to cover the beds, y'know. But hand-quilting them takes forever, machine quilting them is a nightmare, and sending them out to have someone else quilt them gets pretty expensive. When you make smaller quilts, you can make MORE quilts.

Those batiks are gorgeous, Tonya. Finishing up so they don't have to be packed? How's that going?

Tonya, LOL the link you posted with my name is wrong...you must have been up late blogging as was I. I had to change about a dozen things on my last post then gave up and decided not to post on any of the other blogs I am a part of.

Love Habibi...doesn't look like he wants any company up there on HIS boxes!

that is a beautiful pile of batiks - I have to agree, working with really big quilts is overwhelming - that is why I usually hand quilt the big guys - takes a lot longer but it is too hard to smush them under the machine

Lily certainly does look like The Supermodel! Gorgeous!!! Glad to see a pic of Habibi too!

I can totally sympathise with your cat/fabric problems. At least - unlike some other bloggers - I don't feel in the least guilty when I have to disturb their naps to dump them off the quilt so I can keep sewing! They sleep entirely too much anyway.... lol

Lily's got such a pretty little face.

you'd think with a whole playground of packing going on she'd be able to find somewhere else wouldn't you :-)

The easiest way to always avoid the V-cut is to make sure when you are measuring what size strip you want to cut make sure that you find a line on your ruler that at the bottom and parallel to the bottom edge. Some line the edge of the rule rup but that doesn't work for me. I use a line put it about an 1/8th up from the bottom of the fabrics fold. I make sure that I see the same amount of fabric showing all across that line and if you do that it's exactly straight or (at a right angle) to what you will cut and NO V strip. You can also lay another ruler across the bottom to get the striaght line, then put the cutting ruler against that. Whatever way you do it, it's a must to have that cut be perfectly squared up with that bottom.

Once I do that, I check every strip as I cut for about 12 " then I will go back and re-trim again to make sure I am still working at a perfect right angle cut again.

Hope that helps for getting the cut right!!

In a previous life, Lily was black and named Isis. =)

I, too, make those lovely V-cuts. I found that if I put the end edge of my ruler even with the fold of the fabric and cut, I get smaller or no Vs, though. V, that would be an easy letter to make wonky. =) Love those batiks, recognize some from my own stash!

Haha I have lovely gams too.

I see what you mean now. You want your backing to end up straight/square - not the seams! Uh huh, yep, I can see why that's necessary :)

Oh I think I like Pokey best! What a little lady. Well I did and she was until I heard about the upchucking! Yuck!

Wait till you see all the things I played with today!

Can't wait to see your back - that is going to be one wild back!

Tonya - I have been meaning to tell you how I love your article in Quilter's Home...You're famous now...I like the magazine.

Those kitties are a trip--I especially cannot believe Lilly had her face that far down in the glass. Mine has been known to drink out of the ironing board measuring cup but is currently out of that little habit. Fun to watch.