One of the metro stations is being refurbished and all the huge posters they paste up have been scraped off. I could imagine these hanging on an art gallery wall: 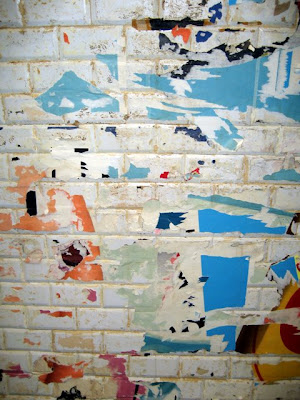 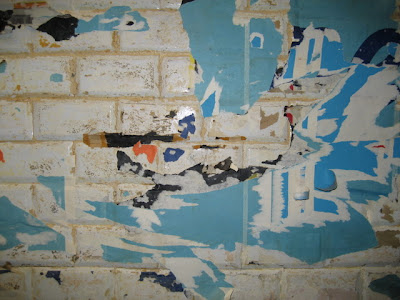 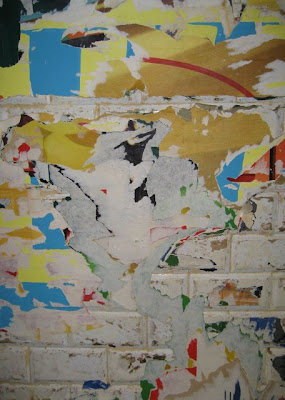 This is a pic from Monmartre. This church is St-Jean l'Evangeliste. It's beautiful, but hard to photograph properly. According to my guidebook, the church was built in 1904 and was "one of the first concrete buildings in France; despite its sinuous Art Nouveau curves, the bricks had to be added later to soothe offended locals." 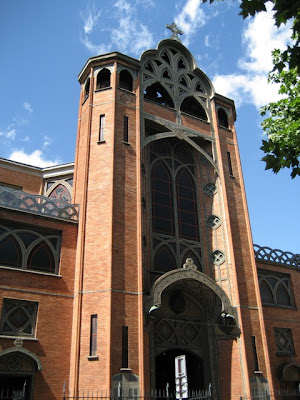 Did I tell ya'all that my husband and I finished rewatching season 5 of the Sopranos and are now finally into Season 6, part 1? Not only that, but my sweetie has even agreed to watch an episode or two a night instead of only one episode every Sunday which was the previous arrangement. Woohoo. Of course we're still going to have to wait however long for part 2 to finally make it onto DVD. sigh.

I'm way behind on chores, what with obsessively reading Harry Potter (finished Order of the Phoenix this morning) and watching the Tour de France. Not at the same time, mind you. I need to run to the market and buy fruit (the French raspberries, strawberries and nectarines are incredible) as well as basic foodstuffs and a new mop, pick up dry cleaning, get my phone charged with minutes, etc. All made more complicated since I don't know exactly what hours the various shops are closed. Almost everything except the supermarket are closed for 2 to 3 hrs sometime in the afternoon. I better get going.

Posted by Tonya Ricucci at 7:10 AM

Email ThisBlogThis!Share to TwitterShare to FacebookShare to Pinterest
Labels: Paris

It always seems so dreamy to think of living in another country, but I imagine that learning all the in's and out's of shopping hours and getting around cut into the glamour sometimes.

Love the neat pictures of "scraps".

I'm catching up, Tonya. I've had my nose poised close to a needle for several days. Hubby asked me this morning if I was going to sew all day *again*. He-he.

Great picture of you in front of the Lamassu. It's fun seeing all the pictures of the wonderful things you get to visit there. I especially love the metro art! The fabric detailing on those statues is incredible. That's the best part of them. Interesting about the dogs and the lions.

Love the crusty of your four little kitties. Those green eyes especially. The crusty makes me smile as I think you have captured their personalities so well in it's simplicity.

Love the arty walls. Strangely enough, the shot of the Montmartre church makes me think of a church in Columbus, Indiana, that was designed by Saarinen and built in the 1940s.

Tonya - yet again your eye for detail wins out - only you could spot the beauty of half stripped walls - you should blow those pictures up and sell them!

Yes, you're supposed to sleep away the afternoon!

Wonderful all these pics.
ciao ciao

I love your way of looking for the unusual. Yes, I can imagine those walls in a modern art exhibit!

Those metro walls are great. There could be a crusty or a quilt in that don't you think? Why is that chores are chores no matter what the location?