It's looking patriotic around here. 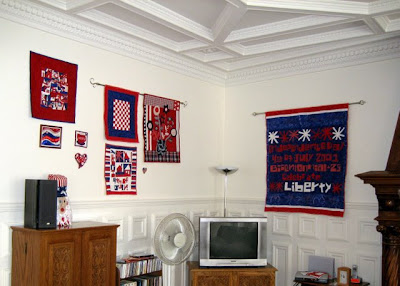 This crusty used to have the word USA embroidered in the middle. This year I decided that the buttons around the edge were too heavy for that, so I unstitched the floss and added more buttons instead. 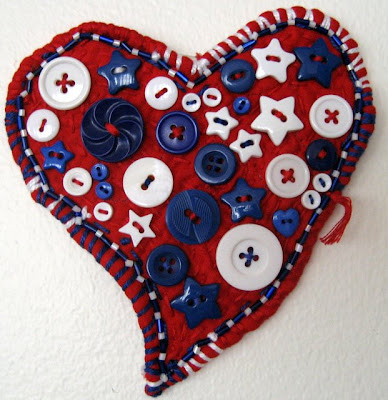 I've never posted a photo of this quilt, Celebrate Liberty, before. I pieced it, Bonnie Hunter did the machine quilting. 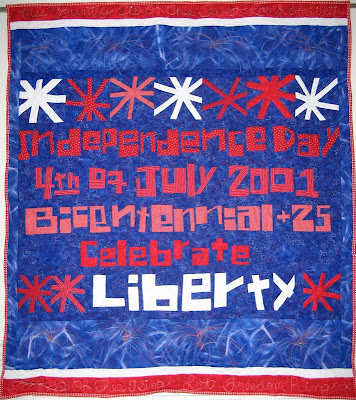 That does say 4th of July 2001. I boobooed making the f and did it backwards, but left it that way. I like booboos, just wish it didn't look like an "07" with the European bar across the 7.

It has rained and rained today, but now the sun is out.

Have you all seen Kristin's Knit One Quilt Too? She posted pics of several of her quilts in progress, including a great liberated stars in red, white, and blue.

JMBMommy is appliqueing a marvelous flock of chickens in red, white and black. Loads of personality.

ScreamingLulu is a hoot. She's recently been sewing images and words using her machine with the feed dogs down. I guess that would be called machine embroidery. Anyway, you can never be sure what to expect when you visit, her current post being a prime example. I think this is my favorite.

Email ThisBlogThis!Share to TwitterShare to FacebookShare to Pinterest
Labels: Crusties, my quilts

Word of warning: you best hunker down for Bastille Day, July 14. It can get a little rowdy.

Your patriotic heart is charming. What a marvelous array of buttons. Just one question: What's a "crusty"?

I love that Liberty quilt! Thanks for the link to my blog and to the flock of chickens. They're really cute.

That crusty and the quilt are wonderful. I've never really tried a patriotic quilt (other than a wall hanging for an aunt who had two sons in the military). Maybe it's time to re-think that one!

The crustie is looking very good. All buttoned up in fact :)

I like the change on the crusty-you do up patriotic better than anyone I know...thanks for the new blog links..a fellow Portland-er...nice.