These are photos I took during a walk on 3 June. I went crazy for these lions on the facade of a building near the Seine. 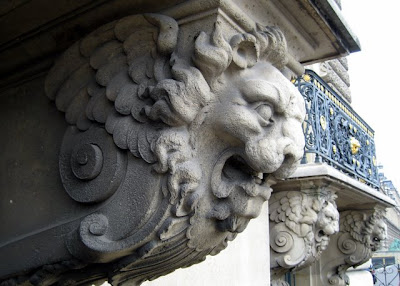 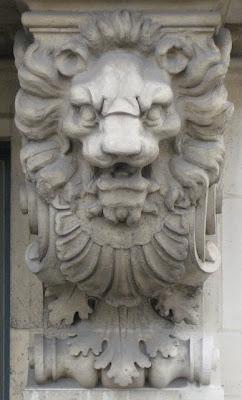 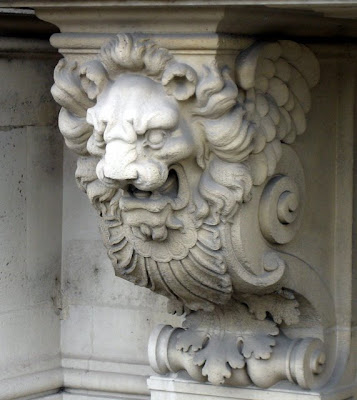 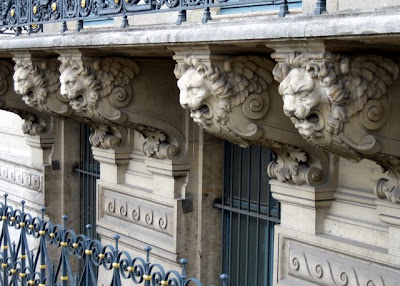 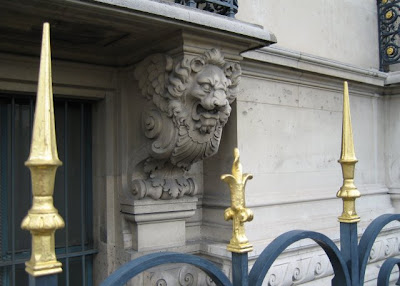 I'm not quite sure what this sign says, but I think the building was decorated around 1865. At first I thought these lions, and all the other decoration, were carved. But now I suspect it was some kind of concrete poured into molds. 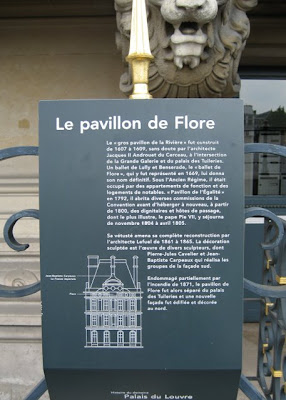 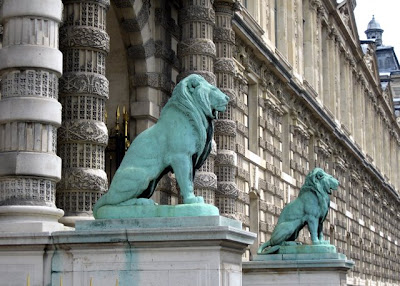 I had no idea what this building was until I saw this sign: Porte des Lions, Musee du Louvre. 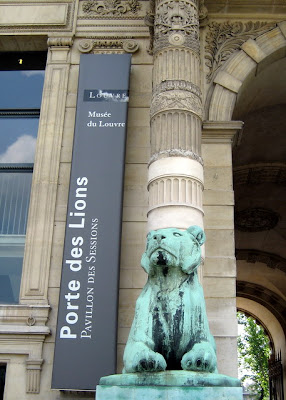 Speaking of lions, have you been following Jude's SpiritCloth blog? She's currently working on an amazing band of gypsy lion musicians. Furthermore, I only recently discovered her fantastic lion quilt pics in Flickr.

It's been rainy and overcast here. I feel sorry for the Tour de France cyclists if this weather continues. So far I've seen no hints of activity for the race, although there are grandstands going up in the Place de Concorde. I was freaked out on Monday by jets flying in formation overhead. Apparently there is a military parade for Bastille Day, this Saturday, and this was just practise.

I recently completed the novel Full Dark House by Christopher Fowler, a mystery set in both modern day and WWII blitz London. I liked the characters a great deal, and the hint of the supernatural which really isn't (reminiscent of Douglas Preston and Lincoln Child, although they do it better). I'd say 3 out of 5.
Posted by Tonya Ricucci at 3:04 PM

When in college I spent a month in Paris. We had already been there about three weeks by Bastille Day and I had not seen the TV, or read a newspaper the entire time. When the practice jets flew by I almost peed myself thinking that WWIII had started and here I was on a whole 'nother continent than my family! On Bastille Day though they were very impressive, trailing red white and blue (for France NOT the US) smoke.

Those concrete lions sure look very grumpy - you wouldn't want to argue with them!

great lions! They do rather looked like poured concrete rather than carved, but regardless they are illustrations of architectural adornement :-) Our larger parking lots have signs in different areas with pictures of different animals to help you find your parked vehicle the marked door reminds me of that, but done with style!

Ha! Nothing like a challenge to my university French. I have made a fairly loose translation of the sign:

The large Riviera pavilion was construction from 1607 to 1609, without doubt by the architect Jacques II Androuet of Cerceau, at the intersection of the Grande Galerie and the Palais de Tuileries. A ballet by Lully and Bensorade – the Ballet of Flore – was presented here in 1669, although given under a different name. Under the old regime, it was occupied as apartments and lodgements for the aristocracy. Called the Pavilion of Equality in 1792, it was used for different purposes for the ‘Convention’ before being remodelled again, around 1800 by dignitaries and VIPs, including the most illustrious Pope Pius VIII, who lived here from November 1804 to April 1805.

It was completely reconstructed by the architect Lefuel from 1861 to 1865. The sculptured decoration the work of various sculptors, including Pierre-Jules Cavellier and Jean-Baptiste Carpeaux who created the groups of the south facade.

Partially damaged by fire in 1871, the Flore Pavilion was then separated from the Tuileries Palace and a new facade was made and decorated on the north side.

You are doing us a great service Tonya by reminding us of the beauty of Paris - many thanks!

Oops, that was constructed, not construction :)

Ok, you're still making me drool over Paris. Those lions are fantastic! I love the wavy lines you are quilting on your America quilt -- it really does look like a breeze blowing through. And what a great use of that flexi ruler -- thanks for reminding me I have one :0).

Thanks for the lion pictures. It was this kind of wandering in Egypt that I loved, and it looks like I'll see Paris the same way. =) Did you go into the museum? Is it expensive?

The first time we went to France we stayed outside of Paris and drove in to sightsee. We didn't know about Bastille Day and got caught in the most huge and amazing traffic jam that we've ever seen, before or since. We were in the middle of a huge traffic square with cars pointed in every direction. My advice: don't try to drive anywhere on Bastille Day!

Once again, thanks for sharing Tonya. The fence looks intriguing also. And I love the oak leaf type design at the bottom of the lions. That would look great in a blank square on a quilt with on-point blocks.

very nice pictures
and i always try to think of the people who made these objects,
how was life for them!

There is something about those lions... they are quite hypnotic.
Here in Australia, it is fashionable among some ethnic groups to have huge stone lions guarding the front of huge Villas. The Tax people said, the bigger the Lions the bigger the tax wrought!
I am sure that story is never repeated today, since it is not PC!

I may never get to Paris, but I'll certainly feel as if I've been introduced via all of your fabulous pictures. I so appreciate your sharing them!

Sister was given a "Green Man" (Google it) as a wedding present. Made out of terracotta, it is poured into a mould like your lions. How is the Tour doing? Haven't managed to watch one bit of it yet and my favourite bit (the Alps) is coming up soon.

My French is a bit rusty but I think that translates to flower pavillion. That doesn't necessarily tell you what the building is for.

The Tour got exciting yesterday with two GC contenders, Kloden and Vinukourov, crashing badly. They both looked awful today.

I love the lions. I think lions should look dangerous. They are. I once held a baby lion in Mexico.

Nope flore is Spanish. Fleur is French. I have no idea. I used to speak French, Spanish and German but not so much these days.

A few of those lion pics remind me of the cowardly lion in Wiz of OZ!