My friend Finn wrote an interesting post in response to my orphan quilt. She challenged me to make another orphan quilt, this time including leftover blocks from everything, not just my favorite colors that go so nicely together.

I can't do it, Finn. I just can't. Throw blue and white and red and white in here with these? And Christmas? Agggh. But I do have enough blocks left over that I could still do another whole orphan quilt. I can't believe how many nine-patches I have laying around. 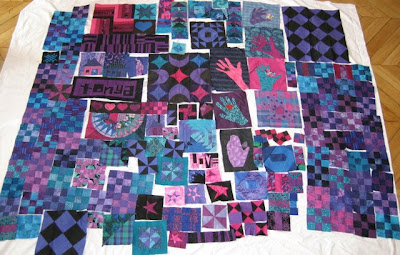 Leftover houses and my name block that fell out of Bricks: 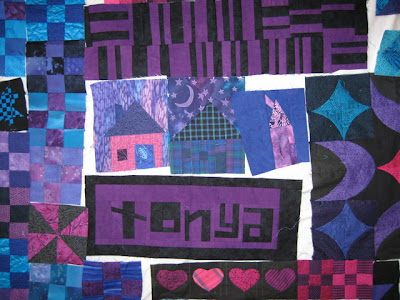 These heart in hand blocks are more like a UFO rather than orphans. My quilt guild friends of many years ago made them for me. And there's a crescent moon I was trying to make work.

Now these arcs are truly orphans. I was making the Karen Stone paper-foundation Indian Orange Peel quilt and didn't think to try putting one of the blocks together until I'd already made a LOT of the arcs. Well I HATED the process, couldn't make it work. I think I'm actually going to turn these into some interesting crumb blocks. But first I have to finish ripping all the stinking paper out. 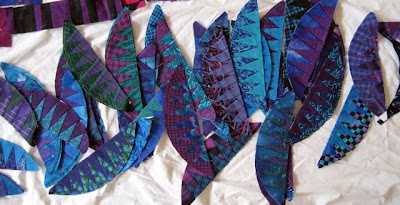 I'm not willing to throw holiday blocks in, or any fabric that has white in it, but how would these orphans look with some refugees from the other side of the colorwheel: 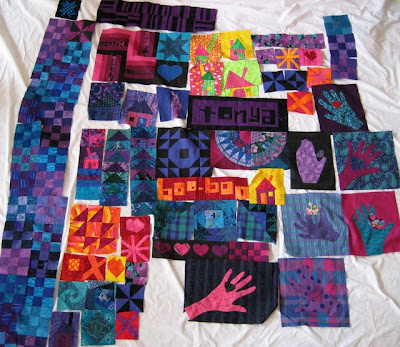 That I could do, Finn.

The kittens paid lots of attention while I was throwing orphan blocks around the floor. Lily watched from the hutch. She's my supermodel: 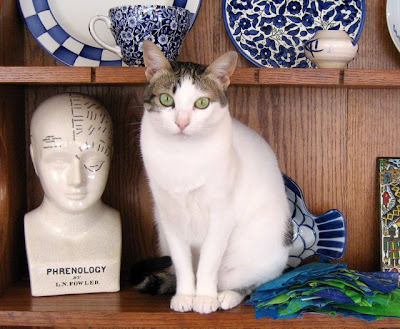 And a photo from a bit further back. That's an Egyptian embroidery done by a woman from Moqattam there on my bulletin board. 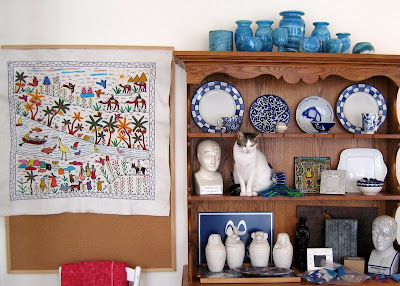 Pokey in the orphan block box: 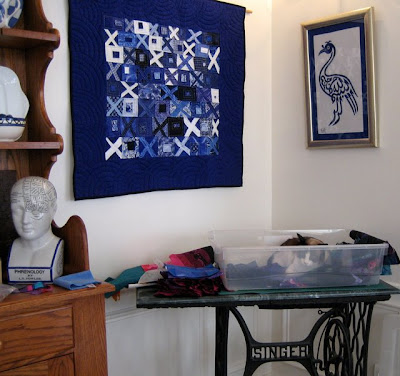 I posted below about this quilt...but keep the pretty yellows and red/oranges....they sparkle very well and really bring it to life!

Hmmn...I kind of like the warmer colors added in, though it would be interesting to see what it could look like with all the colors mixed in. Not saying you would have to actually construct it that way -- but would be fun to see.

Love the photos of the Assyrian collection. My dad used to work near the University of Chicago campus. The Oriental Institute was nearby and they have a fantastic collection of middle eastern artifacts as well as Egyptian. (why I'm separating the two, I don't know -- but I do for some reason). I've seen one of those large pieces up close. They are so detailed -- and huge! It's amazing how beautiful they are.

Tonya, Finn has your number!! LOL. she is trying to get you to jump completely out of your box. Just reading your post I could feel you squirming!!!! LOL!!

I TRIPLE DOUBLE DARE you to throw in a Christmas block!! You don't want to us to think you are a chicken!!

BTW, you have the cutest cats on the web!!

Personally I love the refugee orphans ;-) They look amazing and they need a good home, ha ha...

Well...I don't know about throwing EVERYTHING in. What would be the point, especially if you don't like it? Using your internal editor is not the same as being controlled by the quilt police.

I kind of like the look with the pinks, yellows, oranges. But it need a bit more of those colors yet. Taht would make that orphan quilt a bit different than your other one - although I LOVE that one! And yes - do something with those arcs! Tooo cool! Look at how beautiful my Lily is!

holy cow! you have more orphans than I have blocks! The orphans look fantastic.

I love the other-side-of-the-color-wheel orphans thrown in. It really makes the blues and purples sing!

Oh, are Pokey and Lily cute!!!

Blimey Tonya. How many orphan's have you got! I love the heart in hand blocks and the tiny houses. Paper piecing - yuk! I know I should try, but I haven't got the patience.

Funnily enough, apart from the houses at the tope, the rest of the that photo above Lily sitting on the dresser looks sort of ok.

The refugee blocks really add zing. I like that variation a lot.

When I saw this quilt, named The Orphanage, at the NQA show in Columbus last week, it reminded me of the blog dialogue between you and Finn. I was impressed by the very wide variety of blocks--color-wise, size-wise, technique-wise--in this quilt ... it definitely was an inspiration for ME to combine orphans more freely.

Hello Tonya, yes, I'm here to see what you've decided...*VBS* Are you going to play? How about if I modify it THIS time? I'll agree to what you say you can do with the other side of the color wheel added...I really like what begins to happen.
And no, I'm NOT surprised at how many orphans you have, by plan and accident...your body of work is already more impressive than many realize..*S*
So OK for now, the stuff with light or white background can mellow abit longer. Altho a Calendar Orphan might be fun..LOL, News Years til Christmas?? OK...and I'll join in leaving out SOME of what is in the pile, just using what I choose from what I have. Agreed? No Triple Dog Dares this time sweetie..but watch out! Hugs, Finn

I like the warmer colors. It brings some pizazz to it!

That's too pretty as it is. Maybe put all the left over colors together, but not in this one!

I like the spice added by the warm color refugees. I hope you do something with that particular mix of blocks.

Finn has a great idea about making a calendar orphan quilt. That might be a way to work some of those blocks with white in them into yet another orphan quilt!

good compromise and you certainly have pletny of fun orphan blocks to choose from...love the supervising kitties...

Hi, I threw my hat into the ring on this one as well, but I am not even playing the same sport, let alone in the same league when it comes to you girls and your orphans!
I am about to head over and search, thinking may scratch up 8????
Love the blue, then the added oranges etc, but not sure i could throw in a Christmas, not if you woulf then hate it!
Loves your latest post, the walh around Paris was amazing.....and I would secretly put a hat on and go see that harry train with you!! Tracey