New Pottery and a Head

I went a bit nuts today with the shopping. Spent too much money. I'm normally very cheap (I may be cheap but I'm not inexpensive - ha ha ha) and don't splurge but today I decided to go ahead and buy some blue and white Palestinian pottery that I've wanted. 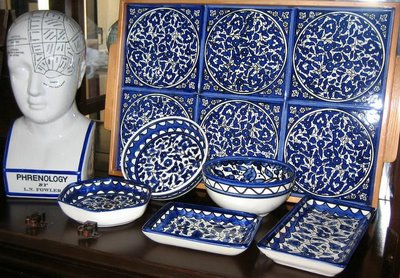 If I'd actually bothered to translate the prices into dollars, there's no way I would have bought the tray (ouch). I think it was the acquisitive part of my brain that refused to do the math so that I could go ahead and just buy it. Now that I have it, I'll enjoy it. To look at anyway. We entertain so infrequently that I can't justify buying anything using that excuse.

The phrenology head on the left is from London, England. I've now brought back two large ones and a smaller one in my carry-on luggage. No, that's how many I have; I brought back another one as well for a friend who collects hats. Don't ask me why, I just love these heads. Phrenology is the "science" of reading bumps on the head. Kind of like palm reading only different.

We had a wicked amount of rain yesterday and the night before last. Just amazing. Now there are enormous mud puddles everywhere and the trees and bushes all look incredibly bright and green. Usually all the foliage is covered in dust/sand and looks dirty.

I don't know if it's the rain causing problems with the plumbing, but our water pressure is low. Had to wait ages before I could take a shower this morning and we were out of hot water last time I checked. Ah, apartment living. It's just too hard for the water to make it all the way up here to the fifth floor.

I'm goofing off instead of sewing. I did do some of that earlier and my excuse now is that I have to ponder my next move. Yeah, that's it.
Posted by Tonya Ricucci at 9:34 AM

What wonderful pottery!! I'd say the tray was just about the right bonus for the tour of duty in Egypt...*VBG* Stike while the iron is hot, so to speak. Love the bowls and small trays also...what a great shade of blue.

Okay so you got some blogspam. But you have to admit it's pretty funny that it's attached to this post in particular! Maybe you used a word they search on?

Anyhoo. You don't need to justify retail therapy!! Especially when the end of your stay is nigh. Bet you'd pay a lot more in Paris!

I love the phrenology head. It's a fascinating "science". And look - it matches all that Palestinian blue. Perfect!

gorgeous pottery-a break from sewing is a good thing...take a design break and come back with fresh eyes...

The pottery is GORGEOUS! What a wonderful shopping area - it is a good thing I am not living there! You are going to have so many wonderful treasures!

Ooooh ooooohhhhh oooooohhhhh Love the head! And the pottery and the tray and and and......glad you are pondering your next move and showing us these things!

The pottery's gorgeous!! It'll be the envy of anyone you have over. People eat with their eyes first :) Interesting about the study of bumps. I'd love to have my head "read".