I'm not going to put in loads and loads of pics of our trip. My blasted camera, which is not very well designed, managed to lose all battery power after the first day, so I had to pry my hubby's camera away from him for shots that I really really wanted to get. Other than that glitch, we had a wonderful trip. I was so incredibly sleepy, with help from the Dramamine, that I slept for most of the flights down to Abu Simbel - ah, that made it easy.

Our number one reason for taking this trip was to go to Abu Simbel. That was the one major attraction that we'd missed on our previous trip to Upper Egypt (aka southern Egypt). As we rounded the bend we could see the smaller temple and it didn't seem all that impressive. But then, bam, there's the Great Temple. 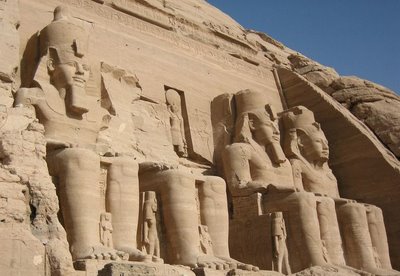 This monument consists of three gods, as well as Pharoah Rameses the II (second from the right) who chose to deify himself. You can barely see her, but that's Rameses' wife Nefertari who doesn't even come up to his knee. The dude second from the left lost his head and torso in an earthquake centuries ago. Rameses' 62-year rule ended in 1212 B.C., to give you an idea of just how old this is.

And when I say these statues are gigantic, I mean it. Here's one with bitty people in it to give you a better perspective. You can see Nefertari better here. For some reason my camera's pics are much redder than hubby's. 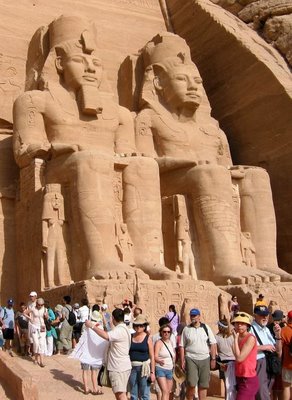 And here's your tour guide: 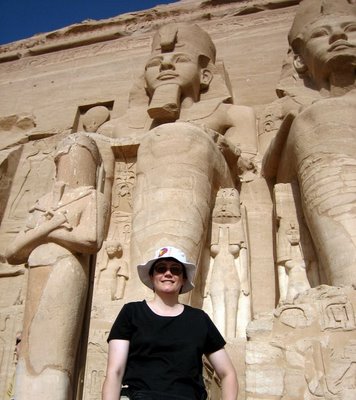 Another amazing thing about the temples at Abu Simbel is that they were moved from their original spot back in the 1960s. The High Dam was going to flood them, so UNESCO carved apart the monuments and moved them here. That is incredible, esp after having seen them.

I loved Abu Simbel, but didn't enjoy it as much as I would have liked - one of my knees (not the usual suspect) was acting up. I was worried I was going to overdo it and there goes the rest of the trip. Luckily it only gave me trouble that first day.

Posted by Tonya Ricucci at 2:38 AM

Email ThisBlogThis!Share to TwitterShare to FacebookShare to Pinterest
Labels: Egypt

Oh my gosh! This is just so amazing! I can't eve imagine seeing this in real life! It is just amazing! Love the tour guide!

Thanks so much for sharing all of this! You are so lucky to have experienced it all first hand! We look forward to our tours through France!

I'm having flashbacks to sitting in art history class and having to list most of these oh so familiar looking statues. It must be wonderful to see them in person. My sweetie is drooling over your recent trip. I sent him the link so he could see. It's one place he really wants to see in person.

I am very much enjoying the pictures and monologue, it must be very beautiful there :) xoxo melzie

I am absolutely loving your tour! Why are the wife statues so small here?

My 1988 foreign exchange student's father was part of the crew who moved these temples. He shared his stories with us, and now I can put your pictures with his stories.

Love all the vacation pictures. You were the first person I thought of when I heard about the bombings. So glad you are safe and not near any of that.

Wonderful tour of your vacation - thanks for being our guide! I am glad that you are home safe and sound.