Yesterday my sweetie and I took a guided tour of the pyramids at the Giza plateau. It still amazes me that one of the 7 ancient wonders of the world is located only 30 minutes away by car, depending on traffic. It's also interesting to compare my hubby's photos with mine. I seem to have people, he goes out of his way to have none. Anywhere here are just a few photos.

The Great Pyramid of Cheops was the tallest man-made structure until the Eiffel Tower was built. This thing is huge. I was in a better mood this trip so it didn't just strike me as a big pile of rocks... Our guide convinced us that it was worth going inside the pyramid to the burial chamber. This is what I could see looking out from the robber's entrance to the pyramid. There's Cairo right there. And loads of tour buses. 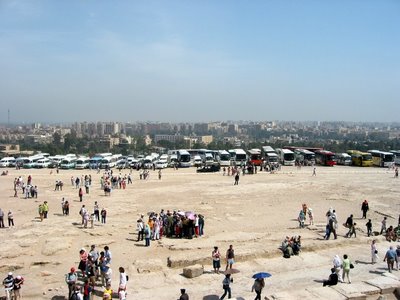 It was an interesting trip into the pyramid. I didn't panic and run screaming, tho it wasn't exactly pleasant. You have to climb a 45 degree ramp bent over double. That went on quite a ways. It's a narrow little thing and it's the only way in OR out, so you had to manage to get by people as well. The burial chamber itself was fairly small, considering how much stuff I'd expect the pharoah to cram in there to take to his afterlife. And it was damp. Didn't hang around in there for long, let me tell ya. My muscles just ache today.

This is a photo of the back of the Great Pyramid where there are hardly any people at all. Most of the hordes are in the front I guess. Closest to the parking lot. 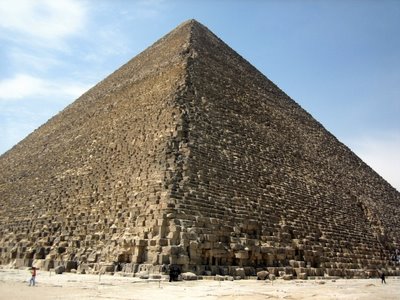 I love the Sphinx. His proper Egyptian name is Abu Hol, Father of Terror. 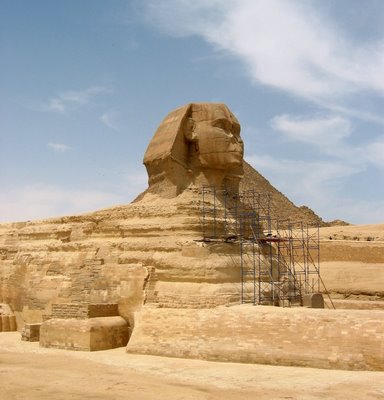 And this is what it looked like when I stepped back (and down) a few feet: 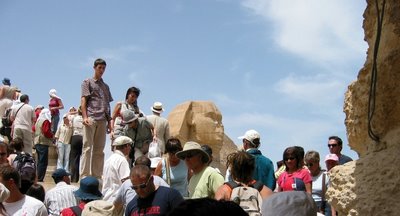 Yeah, lots of people. Not just tourists either, but some of the locals were doing tours.

The horrible obnoxious sellers of postcards, bookmarks, water, etc weren't nearly as bad this trip as the last time we went. Is that because I have acclimated to Egypt or that we had a tour guide and didn't look like such easy prey? Still makes me angry to see little kids selling stuff, tho this was at least a Saturday and there wouldn't be any school. Then again, I bet they're there every day of the week.

So it was a good tour, glad we went. Made me feel happy to be living in Egypt, which is a good thing as well. It was only a half day tour, it wasn't too hot, and we had a nice breeze, which means I wasn't completely wiped out when we were done. Plus I'm now smart enough to bring an umbrella with me to provide shade - that made a difference too.

After napping a bit I managed to sew for awhile. This post is already too long for that, but you'll see my progress shortly.

Posted by Tonya Ricucci at 2:29 AM

Morning Ton, what neat pictures...*VBS* I'm sure that, given your description, I wouldn't be going inside..LOL. Curious, yes, but not enough for that limited amount of space. I don't even like caves once I can no longer see daylight.

So glad it was a good tour for you. Acclimating helps alot I think, but so does a breeze.

I've got the next sections of the quilt in my camera, but doggone it, where is the cord or the port?? How did I manage to misplace that???? Off to search for it, Finn

I'[m so glad you went back, Tonya, before you have to leave. One of my dreams was always to go where you are....sigh...it will never happen now. Besides other things, I know I just couldn't tolerate the hordes of people. I will live vicariously through you!

What are they doing with the scaffolding at the Sphinx?

thanks for sharing these photos...what a beautiful day you had.
by the way I too like the more purple via piano keys added to the endearments top

After seeing the pyramid, did you come home and want to sew lots of triangles?

I liked the pictures with people - the first one with the sphinx looks much smaller than the one with the people in the foreground - they added perspective.

Oh my gosh Tonya! I"m so glad you went back and shared pictures. I"m so glad you will have better memories of these. They are just no words to describe. I'd be curious to see the inside, but I"m so clostaphobic (sp?) taht I know I would panic. I don't think I could do it.

I love the two Sphinx photos. What a contrast!

My parents went to Giza on their visit to Egypt and my Dad's legs cramped really severely on the way up that very same tunnel you describe. He had to turn around (no mean feat) and crawl out! Didn't even get to see the burial chamber!

Sounds like you had a good trip - I'm glad for you that you'll leave Egypt having enjoyed the pyramids and all Giza has to offer :)

It was great going on this tour vicariously through you even though I didn't hear the sounds or smell the smells or feel the heat or my legs cramping :) The pictures were great!