Hey, I didn't just waste time goofing off today. I actually did some sewing, as well as net surfing. I suppose it helps that I finished off Dead Like Me so I didn't have that distracting me. I found it hard to do anything else but watch that show while it was on. Darn you Showtime for cancelling it. I would say something snarky about how all the tv shows I like get cancelled (I'm still darn cranky about Firefly and Angel) but Stargate SG-1 just seems to keep going and going and going.

I now have all the letters joined for "little spot" and "pumpkin pie" and I've got the letters made for "stinker" and "booboo." 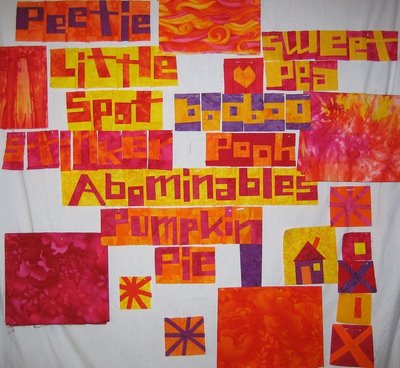 Hmm, another bear reference. Booboo doesn't refer to a mistake but instead to Jellystone Park with Yogi Bear and Booboo. So that makes a Pooh Bear and a Booboo Bear.

I'm not liking how the purple accent is standing out. I did do a Picasa black and white check for contrast and it looked okay that way. Suppose it will be better after I get a bit more in there.

I'm still not completely certain how I'm going to sew this. Could be in rows like Bricks or in clumps, like Reach for the Stars. I'm leaning towards the latter, which is why there are big chunks of fabric pinned up as well as blocks. 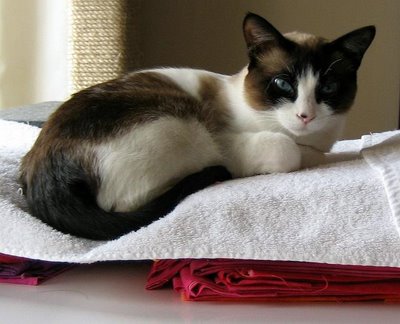 Pokey decided that my fabric was the perfect napping spot. I had the towel down to block the sun, but it works as a fur-block as well, not that she sheds much.

In more mundane matters, woohoo, the car is finally fixed and we're now confirmed for our trip to Abu Simbel and Luxor. We've actually been to Luxor before, so we're skipping lots of stuff we've seen before like the Valley of the Kings, which I hated. The valley was way overcrowded, too hot even in November, and I felt claustrophobic down in the tombs and the incense was overwhelming... Apparently it's already hit the hundreds down in Luxor so it's just as well we're not going out to the valley where it's extra hot.

It actually rained like mad here in Cairo last night and it's only in the mid-60s right now. Ooh, just checked the internet weather and it says Luxor is 81 right now. Yeah, it's gonna be hot.

I loved Dead Like Me and agree with you about all the good shows being taken off.

Pokey is SUCH a beautiful cat! I love

New letters look great..*S* I rather like the purple in there, but ya, more is needed, I think..it's a great shade of purple.
Glad you are working again! Altho the day trips sound pretty darn good too...*VBS*

I normally just read and quietly go away, but had to comment today. That is a fantastic pic of Pokey. She is absolutely gorgeous!!! I love seeing your kitties show up in your posts and in your quilting.

I am currently being distracted by Buffy season 6. And just finished Angel, season 2. So So So good!

lovely photo of Pokey. glad to hear the car is good for traveling and you will get those day trips in-and terrific words-this project is really coming along.

Can't share your love of the Angel series, or Buffy, but I do enjoy Dead Like Me...and SG-1... My brother is a sci fi nut and introduced me to a quirky shortlived series last time I was in the states: Wonderfalls...not sci fi, but surreal...very cool. I'm also loving David Boreanaz in a new series we're getting here in Ireland: Bones...have you seen that one, he is FBI in Washington DC (love seeing my hometown in the show!) and works with a forensic anthropologist...CSI-ish, but gives me a new appreciation for Boreanaz!

It is looking sooo good! I vote for clumps like reaching for the stars!

"Little Bit" is the name of my neighbor's cat, not near as beautiful as your kitties. Another wonderful word quilt - I can't wait to see how you put it all together.