I've continued to make great strides on the Student Letters quilt. I'll show that in another post. 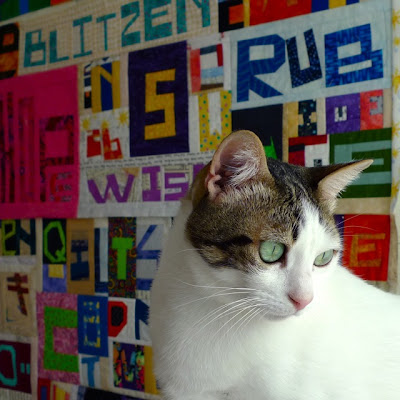 I so incredibly love the quilts that we've collaborated on - they turn out so fantastically. There was Cake, which ended up on the cover of my book. Slither Eek Boo isn't in the book, but will be on my episode of The Quilt Show. (Still don't know when that episode will air, other than sometime between June and December of this year.) Okay, those are the only two finished so far, but the letters quilt is exciting so far and the names will be too.

I figure since I'm making so much progress I can now bug you again for blocks. Bug, heh heh heh. This is a challenge to make me a block or blocks and can be done as complicated or simple as you like so it's suitable for beginning and advanced UnRuly Letterers.

Bah Humbug! done with UnRuly Letters. And maybe an UnRuly Bug or too. And by that I don't mean the word. (I'll explain more later)

I want blocks with the words "Bah Humbug!" And/Or just the word "Bah!" or just "Humbug!"  with or without exclamation points. Definitely without the quotation marks.

Don't turn it into sheep, I don't need a string of "Bah Bah Bah" all together.

You can make the font fabulous and intricate, or simple and straightforward.

One option: incorporate insect fabric into the letters. I can easily see a bug peering out of the middle of the letter a or the point on the exclamation point.

If you have a reasonably non busy insect fabric you could use it to make the letters - don't get carried away, you need to be able to read the letters.

No one knows what a humbug is. You're creating it yourself. But when you look at the insect fabric do you actually see it as a humbug? For instance, there is fabric with ants. I see those and think "ants" not humbugs... Just keep that in mind.

Challenge yourself. You can make the words buggy. What would a "bug" font look like? Would it be made of antennae and creepy legs, maybe a wing or two?

It wouldn't have to be that extreme - you could just add legs or antennae to one letter. A hint of fun. You could do that with piecing or maybe there's fabric you could use just so.

Or go all out and make each letter made out of a formation of bugs. (if you do that though, please don't make it an entire quilt-sized block. maybe just do Bah! or one letter that way)

Have you seen the alphabets done using people forming each letter?  you know, they hold up their arms up and out a bit and you have a Y. What would it look like with humbugs forming the letters?

Can you piece the word HUM so that it looks like a bug?

I don't want to give you any links or hints right now of how to proceed anymore than I've already done. Cuz you guys are awesome. Just look at Slither Eek Boo with its Rattle made of bones and a shriek and eek that look like they're actually being yelled out.

Summing up the rules: All the work has to be UnRuly (free-pieced) and your own (ie nothing that will get us in trouble with copyright violations). No applique.

If your letters are really big, it would probably help me tremendously if you left the words/bugs separate (aka a "Bah" and a "Humbug" word blocks and a block of a free-pieced humbug).  Please, I don't need a block that's 84" long....

Finish all blocks off with background or even a border. Aim for blocks that finish to a number divisible by 2. In other words, a block that would FINISH at 6 x 12 or 20 x 20. yes, you can make big blocks, but there better be some interesting piecing in there!

Oh, this is a Christmas quilt. Please to use red and/or lime/chartreuse/yellow-green somewhere in the block(s).

Don't forget contrast. These need to be easy to read (if not understand right away until you get the joke).

Got questions? Ask away, in comments or you can send me an email.

and oh, I nearly forgot. I set up another blog called UnRuly Quilting for us to use as a classroom/get together to discuss piecing problems and triumphs. There is nothing in there right now, but everyone who want to participate in Bah Humbug is welcome - I just need your email address. You don't need to be playing with that challenge to get onto that blog - anyone working UnRuly is welcome, particularly if you're doing letters.

I'm so darn excited about this new challenge - hope you are too.

Another thing I forgot: Blocks are due April 1st. No, it's not all an April Fool's Joke - I just figured that would be a good way to remember it.
Posted by Tonya Ricucci at 12:21 PM

humbug.....where do you get these ideas Tonya!
I'm in :0)and so in the letter mood already today ....you rock.

I am going to try..I am still a beginner and hope I can fit in with the pros!

Cool! This is how I secretly feel about Christmas. So I can really get in to this one! Great idea!

What an awesome idea.....I'm in and I have the perfect piece of fabric. :)

Sounds like fun...and I have just the fabric in mind!

I would love to make a block!
beth.shibley@earthlink.net

I could use this... sadness reigns @ my house since Commi has become paralyzed in both is back legs. A project like this will work perfectly during his naptime.

I would be tickled to express my feelings in words ~ Bah HUMbug. Would love to join your challenge as I have missed the previous ones. Would you add me to your list of participants? Please?

I'm in, still have Christmas scraps around somewhere. bet I even have the grinch. cw

I'm in missie! I am travelling and can't wait to get home to peruse fabric and my mind starts to turn quick thinking of ideas! How fun!!!!

This sounds like great fun! I think I'm in.

Ooooh, I'll do one! Just the thing to shake off Christmas and start the new year. BTW, I think that's my "orange" and green and yellow "you". I think.

What fun to make a block for the perfect quilt! I'll try anyway, my mind is humming along now with ideas.
I joined Unruly Quilters blog, because I want to learn how to piece the letters...can't wait to get my copy of Word Play too!

I just got your book and laid awake last night trying to think what my first word would be. What fabrics would I use..and what project? This might be just the thing to give letter piecing a try? :)

Count me in! Whenever I work along on one of your projects, it makes me work outside of my comfort zone, and that is good for me! Thank you for asking...

Sounds wonderful! This will definitely give me a jump start in making my own word quilt too!

I'd love to join it!

You know Mark said "no buy" until I go to AU.... Well I just snuck your book into Emily's amazon order of college books! Shhhh don't tell!

Wow -- you musta been reading my mind because I've been thinking of making a Christmas quilt with Christmas related words all around the outer edges and yes, Humbug was going to be one. Can I play?

Its the Liberated Quilters online virtual retreat this coming week. I'll get mine done and get the others going on it too. A great way for them to start letters.

ok I have to try this
does the fabric have to have bugs on it?
red / yellow green I can do!
bugs I will go shopping for if it has to be ;)
Kathie

Count me in. I'm sort of between projects now and this sounds like a good one to get me going again.

Put my name on the list. I am sort of a Bah Humbug Christmas person anyway!

I have some bugs started....I guess I am in. (I didn't want to commit till I had the start of something)
Doesn't everyone create bugs on an early Sunday morning?

I can't wait, I have been working on words a lot for about 3 months. Bah Humbug.

Part way through 'Roll, roll, cotton boll' so have I got room for a new challenge? You bet! Count me in, please!

I have some great bug fabric. I will have some time in February and this would be a perfect diversion. Count me in.

Tonya, I would love to participate! And I'd love to be added to the UnRuly Quilting blog. This is going to be fun!

Oh good, I was just thinking I needed to keep the Xmas reds and greens out for a bit longer. Let's get to it!

Just a note of interest (maybe) - in the UK a humbug is a type of mint - a hard one, that you suck. Don't know if they had them in Dickens' time or not, though!