It hurts to be so disorganized. I got a little notebook to write down info on the blocks that ya'all have so wonderfully sent to me. Now of course I've lost the book. Grr. I hope I have properly attributed these blocks.
First off is Hoot by Valerie of Quilt Messing Around. Whee, she gave me a bunch of extra space to cut down/quilt in. It's a wonderfully hooty hoot and I'll definitely quilt some owls in there for you, Valerie.
And what is that next word? 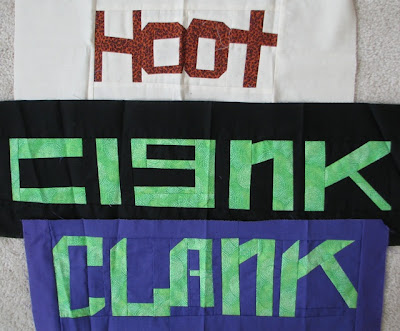 Kimberly made me a clank and after she had it all pieced together realized that the a was backwards (which makes it a g). I understand about that - I just did a backwards y yesterday. I will most definitely use the block in a quilt, not Slither Eek Boo, but a quilt. I find mis-made words and letters charming. (As always, please to send your rejects and extras to me if you're not going to use them - I love them!)
Anyway, Kimberly redid the clank. This time she drew inspiration from the font Angular. That is a fun font. I hope to try some of these someday but oh my that X would be difficult. And I can understand passing on the K. Great job, Kimberly!
Jen D (whom I don't think has a blog) made the next couple of blocks: Luck and Free. They are wonderful and what's even more amazing is that Jen is a new quilter. Years of experience sewing, but not quilting. Now she's working on even more words - woohoo! 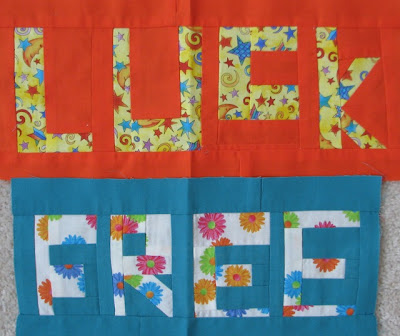 I have even more blocks to show you -- from Brenda, John, and Sharon -- but they're going to wait until another post. I've got to have something quilty once in awhile. Brenda included a wonderful sweet prezzie that is already proudly displayed. Thank you all!
Pat me on the back, I managed to successfully fluidify Pokey on the first try today. (If that makes no sense, read the last two posts.) 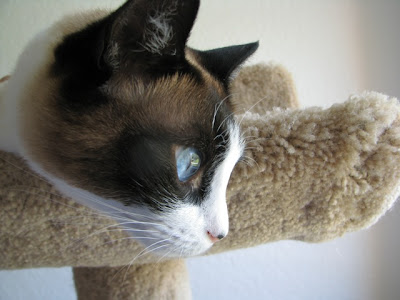 After Thursday's horrendousness (and believe me, it was just that), Pokey did forgive me. She didn't spend too much time in hiding, came out for lovings. She even came to bed with me and curled up beside me, which is rare for her.
I managed to do the ickiness with just one jab today (after a trip to the vet's to get smaller needles) and it went as well as it could. Only now she's hiding under the bed. I want her to come out and forgive me instantly - she'll even get some Fancy Feast that's been pureed with extra water.
No more tuna for the baby. I knew the sodium in the tuna wasn't good but had no idea the vegetable broth was bad for her too. (And yes, there's vegetable broth in Tuna Packed in Water. Rather misleading.) Vegetable broth is bad for cats as well as dogs because it may be made with onions which are bad for both species, as is garlic. I had no idea. You can read more about that here.
I think I have finally stopped shaking, more than an hour after the procedure. I know this will get easier, although I think it's going to get progressively harder to find the little Pokester. I think I'm going to go handquilt now. Maybe my baby will come and sit on me... Even if she won't hand quilting rarely fails to soothe me.
Posted by Tonya Ricucci at 12:17 PM

I found your blog some time ago, just came by tovisit and learned about Pokey. Our kitty boy Caesar had CRF. He lived to be almost 17, and here I am, his litter mate, over 18 years old!
I have mild kidney failure and only need subq's One day a week.
mom is an old nurse, so this was not too bad for her.

here are some tips. get everything together, have one place where you give the fluids, a cozy spot with lots of space. put a sturdy 3M hook on the wall so you can hand the bag up. mom puts the bag on a small plastic hanger. after each subq treatment, put the new needle on so it is all set for next time, other wise, you will see the activity and be inclined to leave the area and hide if you hate this. Now, Caesar was very compliant and took to the subqs quite nicely, for every cat it is different. I prefer to be in my cuppie bed, and have some nice tasty kitty foods to smell and nibble on while getting the subqs.
Try to give fluids in a calm area, not too much noise so kitty feels comfy. Be business like about the procedure, do not panic. Be sure when you put the needle in, you have the bevel facing up, it goes in easier. take your time, don't rush. If the fluid is cold, you can warm a damp washcloth in the microwave to sort of warm up the fluid. Just wrap it around a bit of the tubing, take it off when done with the procedure. Try to keep as need and tidy as possible. Mom give me my fluids at night so I can be calm.
good luck. Have you looked at the low protein foods? Hills and Purina have foods available at the vet.
be sure to have LOTS of fresh water around. mom cleans my bowls an refills twice a day. Always monitor output. If you get constipated you should add a bit of pumpkin (canned not spiced mix) to the meal.

I'm so glad it's getting easier with Pokey and that she seems to have forgiven you. Maybe at some level she knows this is necessary. I hope she comes to cuddle soon.

I don't think the "a" is backwards.

Never mind. I'm having a brain fade today. I see it now. Backwards or upside down? I am so confused.
Ha Ha.

Pokey knows you don't want to hurt her...I'm glad you told us about the veg juice - just noticed it is in Mac's favorite canned chicken treat.

Handquilting is soothing on the soul and if Pokey sees you are sitting down calmly, watching a DVD, then she'll know you didn't mean it, head butt you and ask for love. Be patient.

It's unbelievable the things that go not only into our pet's food, but our own as well. My Mother makes a huge batch of dog food for her babies almost every week so she has control over all the ingredients. In a pinch, she's very selective about store bought brands if she has to use those. It just seems to me that there's stuff out there that shouldn't even be on the shelves at stores.

I'm glad things are getting a little easier for you and Pokey. You'll both make this adjustment just fine. I have every faith because you love each other! She may always run away afterwards, but the periods of withdrawal may get shorter as she comes to expect this as part of her routine.

Love the new words! I hope mine arrives to you soon.

Great words and lucky you on getting that quilt. I hope it gets easier with Pokey as time goes on and that she forgives you asap. It's got to be hard to do that.

The "next word" is "clank." It took me the second time I read your post to see that the "L" is a lower case "l." I guess it is because I have two of them in my name... Callie.

Love all the words. I think I will start a word quilt too. But I need a theme. Chickens? :)

Hope the quilting calmed you down and you feel much better.

Hang in there, honey. Pokey will survive, and so will you...even it it doesn't seem so right now.

Thank you so much for the info about "water packed" tuna. I did not know that and we sometimes have been giving it to the dogs as well as the cats..no more!

Come on, Pokey! And I love the free-pieced lettering--

Tonya, you know I heard about this through a friend and a phone call. ...as if blogging and email aren't good enough! hee.

As you know, if you'll recall, I've always loved Pokey and was so shocked to know what had transpired. I'm glad to know she's doing better ~ for both of you. Blessings my Floridian Neighbor. *karendianne.

You are doing GREAT!! Just keep with the towel and it will get easier for both of you. She will begin to feel better with the fluids too. Sometimes we moms have to do unpleasant things to make our babies feel better! I kind of chuckled when you called her "Pokster". It is kind of ironic now that you have to give her a poke! I hope this gets easier on you both!!

I am so glad they have help for Pokey. It is a miracle what they can do medically these days.
My wonderful 13 year old Smokey developed Diabetes and I had to inject him twice a day. It was hard for both of us but it made him feel so much better, I know he trusted me and forgave me.
Pokey will forgive you too. Just remember you are making her feel better and be strong.
My prayers are with you and I love hearing that she is feeling and looking better. You take care of your self and enjoy the holiday with your hubby.