Class in a Box

Another picture of baby Pokey on the back of Blooming Horrors, which I finished yesterday. At least I think it's done - I've already added more embroidery. 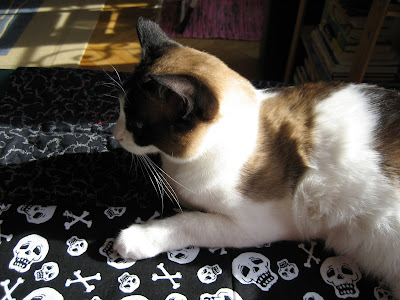 I've been kicking the idea of a "Class in a Box" around. What's that you say? First off there'd be a box and in it I would put free-pieced blocks such as letters, houses, hearts, asterisks. I could also put in samples of quilting such as freehand fans or the fun stuff with perle cotton (like the quilting on Space 4 Rent and Halloween Houses).

I could also include parts. Such as, parts of a house that you could play with and see how they go together. If there is any particular technique you can't get the hang of, I could try and figure out how to include a sample of that.

I would then mail the box off to whoever is interested in it. They could keep it for a week and would then be responsible for mailing it off to the next person. So all this class would cost is postage and maybe a new box, since I imagine the original is going to get beaten up. And yes groups of friends could get together to play and keep the costs down.

So anyone interested? What would you like to see? Better to keep the mailing costs down? Or who cares, cram it full of stuff? I could make up larger samples, finished quilts if you'd like, or just do small samples. (Notice I said I could make a quilt - don't think I'm willing to send one of my favorites around the world.) I could throw in a thready and a crusty if you'd like.

Everyone who gets the box could make a block to put in, that would eventually come back to me. (I've been thinking a quilt of unrelated letters would be really cool. All sorts of fabrics and styles...) I don't know how elaborate anyone wants to get with this. Include a block or gift for the next person to get the box as well? Add a journal that everyone could write in?

I'm thinking this box would start in the states and maybe just stay there for awhile. I think the costs would be outrageous if it were flying around internationally (Tanya's $75 for a box to Japan is still ringing in my mind). Plus, if we try to keep each hop short, it will go around faster.

You wouldn't have to have a blog to participate, just an email account to let me know you received the box and to get the address for the next participant.

What do you think?
Posted by Tonya Ricucci at 3:30 AM

I would be interested in seeing a crusty close up, but not the rest. How about sending different bits out - thready in one box, letters, houses, etc in another so that they are whizzing round the world at different times. Some people may not be interested in the quilting, but might be in the thready, or crusty. Just my 10 centimes worth.

I think the idea is wonderful. Like Clare I think you could perhaps make a few boxes with different items in it. It will take the shipping-costs down.

Having had a lot of experience mailing boxes to China, Japan and Australia, I'm afraid the costs could really soar. Maybe the above ideas would help. Maybe we could just all come over to Paris and see your quilts in person!

I love the idea! and I want to see a variety of things in the box I get.. not just a crusty, for example... fun fun fun!!! I like the journal idea and the little giftie for the next person and the random letters that would be returned to you. I am willing to send something overseas, so it could come to me last.

Ditto what carol e. said. What a great idea!

i guess the box might have to get bigger and bigger???

This sounds like a fun idea. . .your threadys & crustys might make more sense to me after seeing them "up close".

What a very cool idea... Maybe if you set a limit as to how many will participate in a particular boxes travels (maybe 12 people then back to you) it would remove the issue of needing larger boxes. It would be such fun to see and handle one of your thready or crusty pieces in person... I'd love to participate! Yes to the journal - with entries from each participant, what a wonderful addition to the project when it comes back to you. Maybe for the next person, include a scrappy assortment of strips for their stash? What fun to see what you'll do with the efforts of others!!!!!

This is such a cool idea. I would love to see a variety in one box, but wouldn't want it to be too heavy, so would say not a whole quilt. The blocks and examples of quilting/embroidery and the thready and crusty sound great. It'd be like a gallery showing in a box! I would love to see a journal and would definitely make something for you as well as send something on to the next person. Count me in!

I'm there with you, but echo the concern that this box doesn't grow too heavy.

Having someone with an APO address in the loop could help ease getting the box from the US back to Europe. A journal to record each participant's impressions and other additions for Tonya/next recipient sound like fun.

I want to be one of the cool kids, too! I love this idea.

sign me up!!!! I'm still bummed I missed the last class and this is a great idea!!!

hehehe, I giggled when I saw the kitty on the pirate fabric, it again made my day!

I think you are just brimming with great ideas. How about documenting the journey of your peripatetic package for a quilt magazine article?

Just love, love, love those pictures of your kitties. . . . .quilts too, but the kitties rate right up there too. Pokey's the cutest.

this sounds like fun! Remember, those of us in the US have the advantage of the fabulous flat rate priority mail box, so if the stuff were small enough to fit into one of these flat rate boxes, the postage would not be too outrageous. The box I have here on the floor is 11"X9"X6" and for unlimited weight I think it costs $10 and change to send in the US, and since Tanya has an APO, I think we could send it back to her the same way.

I know that I want to play!!! It sounds like so much fun!

Sigh...here is me all dejected because it costs a million to mail to me, but I think it is a great idea. Love all the recent work, the students are doing great-for a girl in a funk you are achieving a bit! Tracey

Ya know? This is a FANTASTIC idea. Count me in -- I've been itching to try some letters -- would be a great reason to do it! As for what's in the box? Journal yep. Samples yep. Variety of styles? please!

Oh my count me in. Like previous posters, concerned a bit for the cost to mail, so maybe a few different boxes journeying about, or just try to keep the weight down, and yes, what a great idea for a magazine article...

A class in a box is the best idea since sliced bread. I especially like the journaling idea to go with everything.

Holly - who hangs back and is always hesitant to participate but always wants to know what's going on :)

I too want to join in this fun idea-nothing beats being able to handle and see up close actual samples of your wonderful ideas.

this is so cool! Me TOO!