Here's what Color Thready II looks like as of this morning. I'm now using a greater range of colors than what I was limited to in Florida. 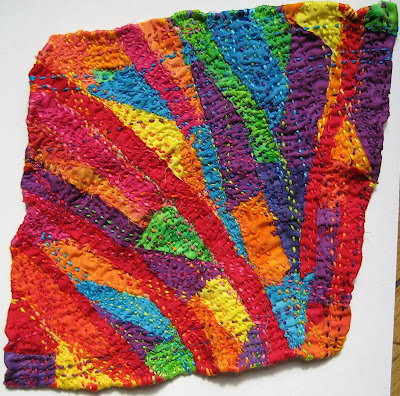 I've been asked about how I make threadies. First let me show you were I got the idea. I have the great book Celebrating the Stitch by Barbara Lee Smith. It's marvelous and has all kinds of textiles including quilts. (There are used copies available at low prices - go get one. This book is loaded with inspiration.)

Anyway, Dana Romalo Andrews is one of the artists featured in the book. She makes free form embroideries that are wondrous little creations just covered with woven stitches. Look at how dense this 11" x 9" piece is: 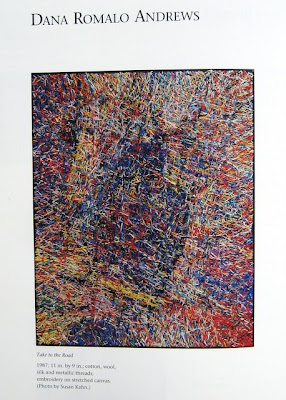 And this is the front and back side of another piece: 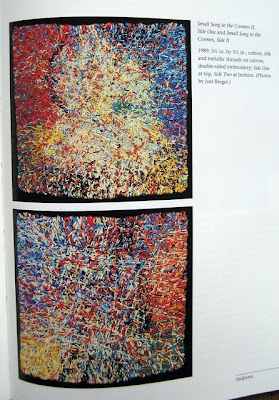 Aren't they incredible? I love them. She starts by couching down leftover bits of fiber onto a cloth. She works both the front and back sides until the whole piece is entirely covered. If you want to know more buy the book or borrow it from the library. [Libraries will get the book for you if they don't have it on their shelves - interlibrary loan is a great tool.]

My works aren't nearly that elaborate. I sometimes couch, but not recently. I usually start with a small bit of muslin and make running stitches with embroidery floss. It can be as basic as that. Sometimes I use yarns, rayons, and metallic threads. Sometimes I throw in some french knots. I've been known to get more elaborate with beads. Whatever I'm in the mood for.

On both the Color Threadies I've basted some colored bits of fabric onto the muslin before I started with the embroidery floss. That way I don't have to cover every single bit of the base fabric with a stitch - the batiks show through in beautiful color. But previously I was covering every bit of the base fabric. I stick to running stitch and then stab stitches in random spots that need covering - no weaving like Ms Andrews does.

Anyway, that's the basic idea behind a thready. Stitch, stitch, stitch. If you want to try this yourself I highly recommend that you use a lightweight fabric for your base - it gets very hard to stitch through towards the end. Don't fuse (again too hard to stitch through). Don't make knots (ditto). I just do a backstitchy kind of thing to anchor my beginning and at the end I run my needle through previous stitches on the underside.

Initially I just hung these creations on the wall as is, but after someone said they looked like the world's most expensive pot holders I realized I'd better make them look more like art.

The blue vases aren't pottery. They're carved out of alabaster - a rock. The shopkeeper in Egypt told me that this was a special kind of blue onyx, but it's not. The vases are all dyed - I know it for a fact since I was cleaning one of my final purchases with a damp cloth and ended up with a clump of blue dye. I didn't see much dyed alabaster when I initially arrived in Egypt but by the time I left it was available in all sorts of colors including lime green and orange. 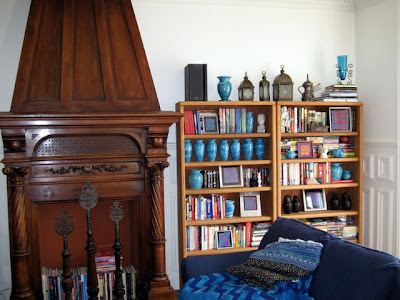 A close up of the modern phrenology head for Kathie. I hope you can see some of the words on here: aliens, coffee, playground trauma, evil, good, email password... 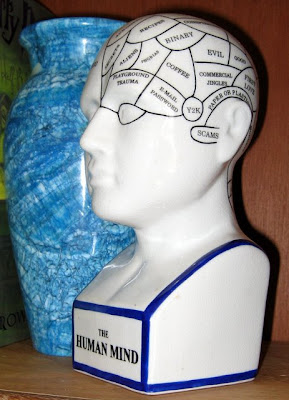 I actually cleaned bathrooms today. Bleck, but at least it's out of the way. I'm still disorganized, but no longer worrying about it. It was gray and rainy this morning, but now the sun is out. I'm going to go work on my thready and find a dvd to watch.

p.s. I should have said that the Harry Potter HARDBACKS are my husband's. I'm cheap enough that I'd have continued to wait until the books came out in paperback, but there was no way my sweetie was going to wait to read the books. He didn't start reading them until the movie came out so I had to go back and replace the first couple of paperbacks with hardbacks so that he'd have a matching set. Did that make sense?

So the phrenology head isn't antique? Either that or those Victorians were very prophetic with areas of the brain all set up for Y2K and Email Passwords. I still love it. Too funny!

Okay you've hooked me in! I've had so much fun with your wonky letters I've decided to give the threadies a try. I've ordered the book plus a couple more on beading and embroidery. I'm hoping having something small and fun to do in the evenings will keep me from vegging out in front of the computer/tv on those days when I don't feel like sitting at the sewing machine.

BTW, I'm your husbands feminine counterpart here in TX. I LOVE the Harry Potter books and movies. Actually I prefer the books as you get so much more imagery with them if you're just willing to look into your mind for the visual images instead of relying on some producers interpretation of the written word. I started reading the books in paperback before the first movie came out. And yes I went back and replaced them in hardback. :-) Just another obsession to add to the many I already had.

Mmmm - those threadies look like fun Tonya - might have to have a go at a mini one for my wall. I love your alabaster blue jars - that shade is one of my absolute favourites

I totally understand your husbands obsession -- but I have the reverse issue. Most of my hardbacks are first editions so I buy second copies in paperback for multiple re-reading. Though I must say there is something about having a hardcover book to sit down with. Since I also have British editions of all of the books in hardcover as well -- um, obsessed? Not me!

You ALMOST have me convinced about the threadies -- although there is another handwork task I have decided I want to learn this summer. Let's just hope my dh's grandmother agrees to teach me!

Love the bright colors on that thready!

I love your "thready". Its appearance is similar to my "crinkle quilts" even though we go about making them differently. Thanks for presenting photos of Dana Romalo Andrews work. I wasn't aware of her art.

I did the exact same thing your husband did. Not wanting a film to spoil my reading experience I waited until I had seen the first one then purchased paperback copies. Then I had to purchase the hardcovers as soon as they came out so ultimately I went back and replaced the first three with hardcovers. I did purchase used copies of those. I guess some of us are silly that way.

Thanks for explaining the thready technique. I think I'll give it a try on some ATC's. We're big HP fans here too, but while my daughter (age 14) has all the hard backs and has read them once or twice she's a huge fan of audio so she can craft while she's listening. She's listened to them each 10-20 times I think and can quote from the books like you wouldn't believe. We're kind of sad the series is ending. Where have the last 8 years gone? I read the first one to her when she was 6 and we were hooked from then on.

Tonya - I've got enough on my plate without you adding to it. Now I going to have to have a rummage through the scrap basket. I think I prefer the modern phrenology head to the old one. Ours is a lot bigger. Just how many bathrooms have you got? How are the cats?

The thready idea is quite intriguing, but not really my cuppa tea. I love the colours and textures though!

Sounds like you're doing a good job of sounding out your environs. I hope you are enjoying it!

Sorry to hear your pusses are not settled yet. They will. Take care of that knee!

I didn't find Harry until the 4th book came out I think? I saw this mass of people at B&N and wondered what the heck the fuss was about and bought the 1st book...that was that. I think it was right before the 1st movie too.

The thready's are very cool!

Barbara Lee Smith! Of course! I KNEW I'd seen/heard that term somewhere before. It's just been awhile since I've stuck my nose in that book. Time to get it out again I guess ;- )

I really like the idea of putting down scraps of fabrics first and then stitching through them. (Especially the colors you've chosen!) This is a great idea for ATC's or postcards, as mentioned by someone else... Thank you once again for waking up our muses!

Oh your theady is Wonderful! I LOVE all the colors! And look - your apartment is really starting to look like home!

oh...another great thready coming along-thanks for the short how to on your approach and another book recommendation. Like Nancy you have inspired me to try my hand..once the two binding projects are completed that is. I am going to scroll back and catch up now...

I have a feeling my brain has allocated a smaller area of my brain than your phrenology head to my email password. With that head I'd do a better job of remembering!
*hugs*
Tazzie
:-)

Thanks for the heads up on the book ... I just got my copy yesterday. Love it! I've got so many ideas in my head now, I don't even know where to start LOL!