I didn't do any tidying before I snapped the pic, so this actually looks normal: stuff piled up and the tv on. It's showing Muerte a l'Anglais (or something similiar) aka the Inspector Lynley mysteries. It's shown with an English language option on the Jimmy channel, so I've been watching it over again.

Anyway, I have two quilts up on the wall now in the living room. These are quilts that have been in storage for the last several years so it's good to see them again. I used a spray bottle to wet the creases and threw them in the dryer with a damp towel - worked great. 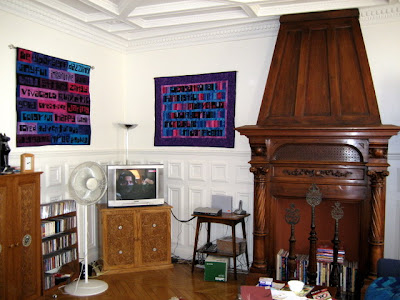 This is Bricks. I've posted about it here. 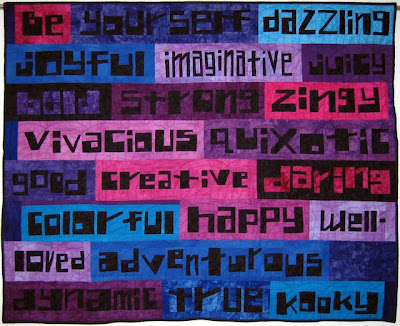 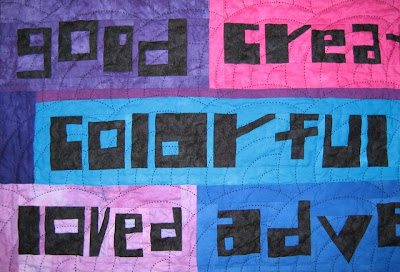 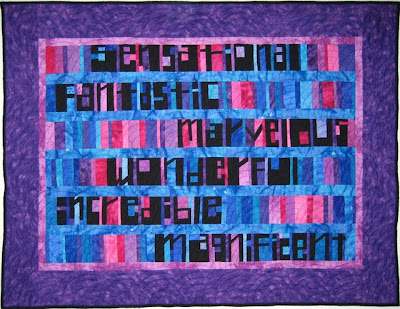 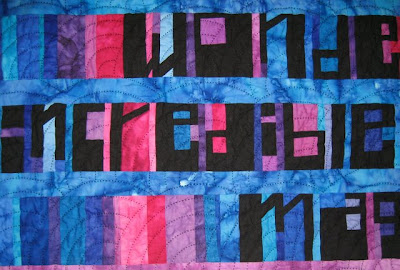 Both were quilted in freehand fans using black perle cotton #8. The fans are done in rows starting from the bottom and going to the top.

These two quilts glow and are made in true Tonya colors.

I have made a friend here, Will, who also quilts and contacted me when she discovered I was moving to Paris. We had a marvelous day last week and she took me on a walking tour of her favorite book stores. Brentano's has a surprisingly huge selection of quilting books. There was also a Japanese book store that Jan and Kathie would be thrilled to go into: magazines and books on Japanese quilting. I was so busy walking and trying to learn my way that I didn't take any photos - sorry. Hopefully I'll do better today as Will shows me Monmartre.

I have become a bread fiend. I've been eating about half a loaf a day of the baguette traditional - which I believe means it's made with just flour, water and salt. The bakery is just at the end of our block and so enticing. At least I'm doing a lot of walking to work all these carbs off.

Cats are doing well, although Lily continues to smack at Pokey. I find that heartbreaking and hope she stops soon. Speaking of Lily, she's picked up a new vocabulary. Used to be that she just cheeped and squeaked. Now she's picked up a hunting cry, just like Pokey has. It sounds like they are in desparate trouble, but when you go running ("oh no, listend to that noise - baby must be in pain!") you find they are hunting down a toy and tossing it around.

I've got my Netflix again: watched the first disc of Freaks and Geeks and loved it. At least going in I know that the show was cancelled far too early. I hate being in love with a show and losing it. Also, hubby and I are finally watching the fifth and final season of Alias. The show continues to make no sense, but I'm so happy that they are finishing off the series well: all sorts of reappearances of past characters. I hadn't realized that Amy Acker (Fred from Angel) was on this season: very fun.

While watching Freaks and Geeks I picked up Cranky Witch and began quilting it again. I'm actually close to finishing - that will be four quilts on the pile to be bound. I did actually clear off my sewing table so progress may commence on that front one of these days.

Posted by Tonya Ricucci at 2:43 AM

Love your quilts - the colours are spectacular. Also love the room, much tidier than mine....

Sounds like you are settling in, quilts on the wall, movies and seasons of shows to watch. BTW -- did you know about the 8th season of Buffy? (no, I didn't mean the 7th and final season on television, I mean the 8th season that is coming out now)

That's brilliant - meeting someone with common interests already - you will really appreciate that as you settle in. Your quilts look fabulous on the walls - nothing like having familiar things around you to make a house (or flat) a home :o)

Looks like home, love bricks, I've not caught up with that before~it scream "TONYA" in a gorgeous way, Tracey

These quilts are so inspiring! Glad you have them again after being away from them for a while. Enjoy Paris!!

We're watching the 2nd season of Alias and love to pick apart all the stuff that makes no sense. But, we realize that the show is just a vehicle for Sydney's athletic prowess and fun dress-up, so we watch anyways. ;-)

You know you were asking about colours? Well that blue, black and purple are the ones so I have been told, with a bit of red thrown in for good measure. Forget the green!

Hope you are having a brill day at Montmatre. Sacre Coeur is my all time favourite cathedral.

The fireplace is just beautiful....I just love it!
the quilts look wonderful on the walls...love the words on the quilt.....glad you have found a friend always makes the transition easier and the book store sounds amazing. I am so intriqued with japanese quilting right now . hard to find the books here in the states though...
Kathie in NJ

So nice to hear that the spraying worked for you. Your living room looks nice. It sounds like you are settling in, step by step.

Glad you've made a friend and are seeing some of the sights. The best thing about the Eiffel Tower is that it's not going anywhere!

Your quilts look FABULOUS, MARVELLOUS up on the walls too :)

It all looks fabulous--the quilts are great. I HAVE to do something wordy--so inspiring.

Going to Montmartre? Fabric store alert: That's where I found decorator cottons that were nearly 100 inches wide. There are a number of fabric stores in that district. Have fun.

The quilts look great up on the wall. Sounds like your life is getting back to normal. How nice to get a guided walking tour of Paris.

I'm happy to hear that you're settling in now, Tonya. How nice to have found a likeminded friend to show you around!
You will love Monmartre! Lots of neat places to poke around and the art history!! To stand at Van Gogh's doorstep! (Yes, it's worthy of all the exclamation points...!)
Ans as usual, LOVE your wordy quilts.

Oh, I am GREEN with envy, Tonya...you have Netflix in France?! The pale imitation we have in Australia, Quickflix, is pathetic in the extreme, and I'm just jealous, jealous, jealous. They MAY carry the last season of Alias, in five years or so...sigh!

Bricks is stunning, and is giving me a prod to break out a bit in my next quilt...well, that is, the next NEW quilt. First I have to finish up some WIPs that have been around too long.

So wonderful that you and Will found each other, and that she can help ease your settling in and learning your way around. Fun!

It sounds liek you are adapting well! I would love to walk through those bookshops and fabric shops. Your quilts look fantastic hanging on the wall!

I could eat the whole loaf in one day! I know I'm a bread freak, and with good bread like that I would be sooo tempted!

I'm so glad your creases came out well!

Love the vibrant colours of your quilts against the white walls (well, I'd like them whatever wall they were up against). It must be a fanbtastic feeling to know that you can explore Paris at your leisure, and not have to cram everything into a few days.

Well, Ton, looks like you are settling in. Don't think I'd seen the bricks quilt before - love it. Marvelous you've made a friend over there. Love seeing the pictures and hearing about your adventures.

I love those quilts, Tonya, and I never knew they had netflix in Paris! Have you read "Paris to the Moon" by Adam Gopnik? I started it a while back and just picked it up again to finish. You might like it -- it's about him moving to Paris with wife & young son, and discovering how to live there...

I think it's rotten you missed out on the honeymoon aspect, but, the new friend sounds fantastic and the living room looks so much better with your quilts up. Not only is the bread fabulous, but, the cheeses are the best...melt into your mouth yummy. So glad you have internet back! it's miserable when you can't chat with all your online world of friends.

Gee, if that's you 'untidy', I must be a complete slob LOL. The quilts look great on the wall :-)