The Santa Invasion of Paris: 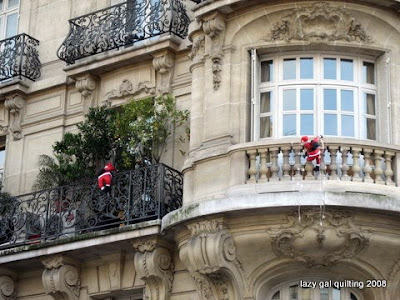 Lookout, here they all come: 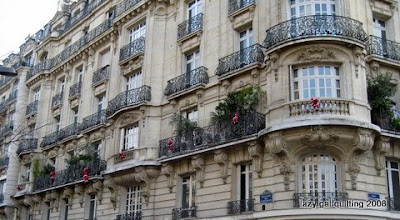 I was Santa's helper while visiting the Netherlands and found myself some wonderful gifts. I love this insect kitchen towel - I gave one to Bonnie too. The label indicates it's from the Textile Museum in Tilburg, Netherlands. 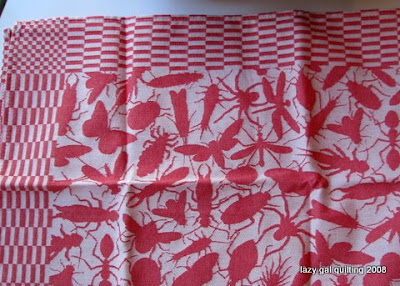 Some great woven fabric. I probably spent too much but I wanted this lime green plaid. And the cheddar stripes and that gorgeous royal blue stripe...

These are reproduction Dutch plaids from the shop Den Haan & Wagenmakers 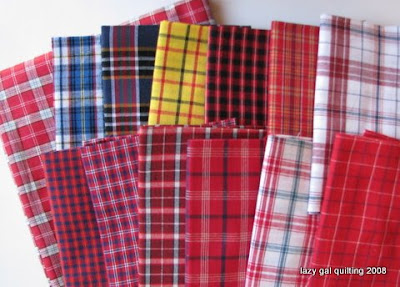 I bought these from a vendor at the Albert Cuyp Market. (If you check out the link, look at the chocolates of mens' privates. I didn't take a photo myself, but definitely got a giggle. Only in Amsterdam). The four batiks here have a very different texture from the kind we get in the states - they're softer. 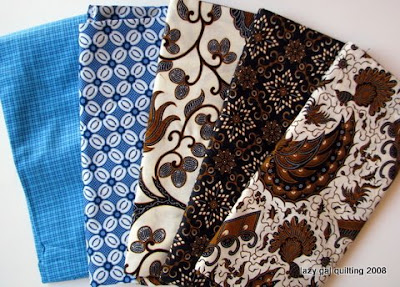 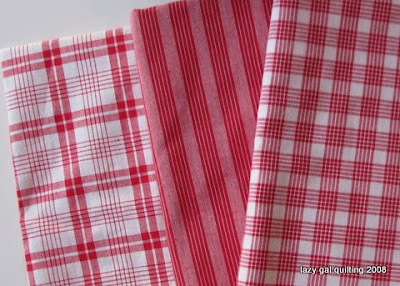 I've kind of got a Halloween/Christmas decorating theme going here. Not by design, I just never got myself organized this year. The gorgeous Lily and my Christmas goodies: 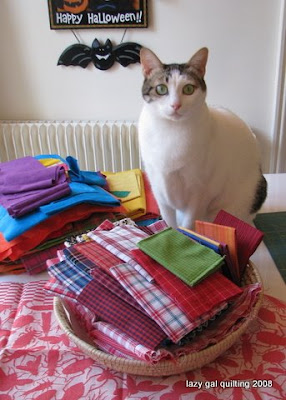 I also bought an herbal tea blend called Spicy. It's fantastic and I wish I could figure out what's in it. Definitely big chunks of dried ginger. Some coriander seeds, cinnamon bark and licorice flavoring - maybe anise? Possibly fennel seeds.... No actual tea though so perhaps it should be called an infusion. I'll have to keep on the lookout for something similar in the States because I love it.
So Christmas went well here. My husband got a bunch of boring books that he's thrilled with. We got the DVD of Raiders of the Lost Ark which is finally sold separately - I so did not want the other two movies. We watched that yesterday and I can't stop humming the theme music. I alternate between that and Who songs from the Grinch Who Stole Christmas.
I forgot to mention, I finished up the hand quilting on Rumspringa. Woohoo!!! No pics yet though.
I'm finishing up some projects here - getting borders put on and backings sewn together - to take with me to Florida. Will.Not.Stress.About.Move. Aiyeeeee.
Posted by Tonya Ricucci at 4:07 AM

Email ThisBlogThis!Share to TwitterShare to FacebookShare to Pinterest
Labels: fabric

A belated Happy Christmas Tonya!! You bought some gorgeous Dutch goodness!
It’s great to read your posts about your visit to Holland.

Love the Santas!
Did you get to see the 4th Indiana Jones yet? that one is good-I know the second one is kinda gross, I dont like that one so much, but love the other ones!Happy New year!
Nice fabrics you got in your travels!

Nice fabric, I especially like those stripy ones. Glad you're not stressing about the move! Seriously, I hope you keep your cool and that it all goes smoothly.

I like your new fabric, particularly the plaids. My mother used a lot of plaids in her quilts. Beautiful color choices. I see you are branching out from your blues!

Whooooo! You sure got some great finds in Amsterdam! I love those blues and the chocolate batiks (No men's privates on them! *LOL*)

It was SO great to see you, I can't wait til you are back stateside and at least in my same time zone! :cD

Merry Christmas Tonya! I wish I could have hooked up with you and Bonnie and Lucy. What fun that would have been! Oh and just send those dutch plaids over here to me! :)

The fabrics are wonderful. And that cool insect towel--my son was VERY into insects as a kid and I learned to like them from seeing them through his eyes. Fun times.

glad to see you add some beautiful fabric from your visit-a happy reminder of such a wonderful time.
great to hear a finish on the quilting! enjoyed all the Santa photos. keep that mantra- will.not.stress.about.move!!!!

Do not stress...it doesn't help at all! (Hope that doesn't stress you even more....)

Great Christmas treats you bought in the Netherlands...is fabric expensive there? The insect towel was great, too.

So we'll both be back in the ole US of A at the end of January...only YOU get to stay! Lucky girl...

Gorgeous fabrics, all! Oh, the possibilities that yardage contains. Glad you splurged on yourself.

ha! The Santa invasion is great! In all the giant inflatable Santas here in the US, I've kinda been missing the European wall-climbing variety. Your fabric goodies are gorgeous and totally worth any amount you spent on them. Re: tea -- it's lightweight -- you should buy a whole bunch of it and just bring it with you (I packed up 20 boxes of German bread dumplings (Semmel Knoedel) when we moved).

oooo, tonya.....love all your new fabrics....it would have been hard not to buy more!!!

the fabrics are fun and beautiful and the cat is gorgeous. my two cats love fabric and assisting me in the quilting process - mostly by laying on the fabric when i want to cut it, oh well, i love having them around. i love your wonderful blog and stories of your travels and life in paris. thank you for sharing!!

SuPeR great fabrics!
that must have been fun!
You are like a speeeedy hand quilter. I go through phases where I can do a lot & then get so bored! I wish I had more patience...

Love the Santa invasion pics ~ too much fun! Gorgeous fabrics you chose... glad you are getting settled after your travels!

I love all those Santa's - what interesting photo's you post - I will continue to look in on what you have :)
Karen
http://karensquilting.com/blog/

Beautiful fabrics! And what a much more interesting trip to Amsterdam than I had with 2 young sons as my traveling companions. They loved the art museums and the foaming glasses of fresh milk. Don't think about your move and enjoy your New Year celebration in Paris.

Sounds like you had a nice Christmas. Looks nice and chilly there. Thank you for the sweet compliment on my Hero Quilt, while I can't say they are really "fun" to make, I love the inspiration I get from you and liberated quilters like you! We will see how the book idea comes along, that sure will be a big venture.

Merry Christmas! Your cheerful fabirc looks like a bowl of candy drops! Yummy.

T, how do you get the little LazyGal thing in the bottom right of your pictures?

What lovely fabrics Tonya and such delicious looking desserts.
When do you move back to the States? Is it a long time since you have lived in the States?
Are you going back to an area that you lived before?
What exciting things you have planned for 2009. It promises to be a wonderful year I hope.
Regards,
Anna

Tonya if you bought the tea in the Netherlands perhaps I can sent you some?

Love your blog - travel pictures and quilty stuff! You are always an inspiration!

The "privates" chocolates are hilarious - but are those women's breasts on the counter in front of them? Equal opportunity chocolates?