I am having such a blast sewing these blocks together. This isn't all of them, doesn't include the ones I made in Florida or a few more I finished last night. But woohoo, I'm loving this. 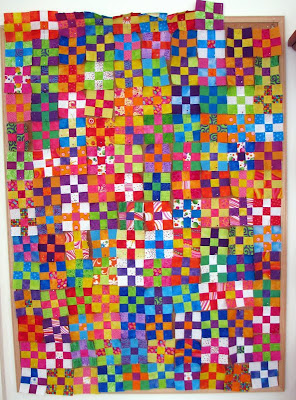 I've figured out that I only need to throw in a rectangle every once in awhile to make a wonkier block (upper left block). And I love how these 9-patches look with a different fabric in the middle. I have to restrain myself from doing that in every block. 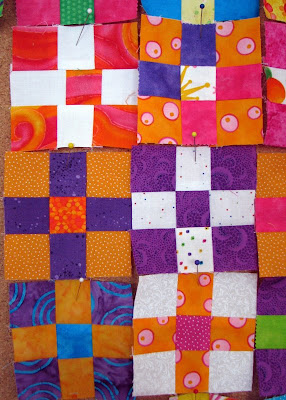 It's so much more fun to piece this way, a block at a time making new creations every block. I started out quilting with the fast rotary cutter style of making 9-patches where you sew the big long strips together, slice them apart and then resew. That's boring sewing. This isn't. Trust me though, happy to have my rotary cutter to make the squares, much easier than doing templates.

One of these blocks is an actual boo-boo. But when there's such a variety of blocks, it's hard to know which one isn't "right." 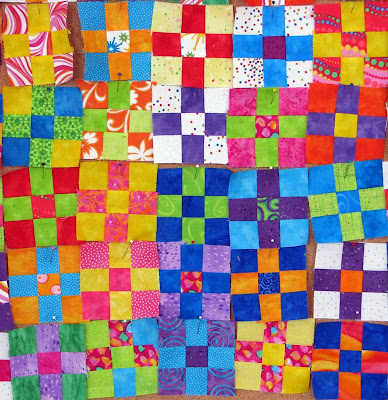 It's the second from the left on the bottom row. I wasn't intending it to look like this, but sewed a couple of blocks together wrong. I refused to use the seam ripper, just went forward. Now it doesn't look like a mistake at all.

As I've said before, when you make things wonky, you can't really do it wrong. When seams don't have to match, then none are wrong.

How's my contrast? It's darker than I expected it to be. 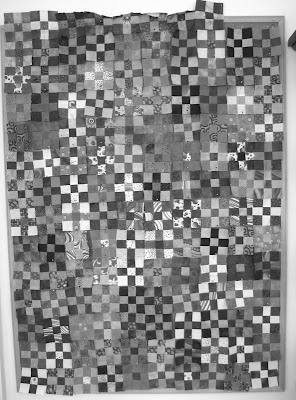 I love the size of the blocks just as they are now, which makes me wonder if I'm not going to find them too small when they're actually sewn together. Maybe I should be playing with 2" squares instead of 1.5". I'm going to sew a bunch of these together, all jammed up just like this, and see how I like it. That will be a wallhanging. And then who knows what happens next? I don't. I love playing with blocks this way, making decisions as I go along.

We had big stormy looking clouds yesterday, but it never rained and we did get a bit of sunshine streaming through the windows. Lily enjoyed the patch of light on my ironing board. 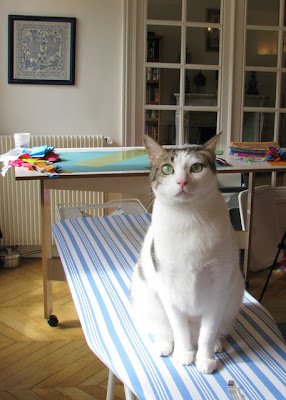 I have links for you, but they will have to wait for another day. It's time to get sewing.

Posted by Tonya Ricucci at 3:50 AM

Those nine patches look fabulous! I love your colour choices, especially as I am making baby quilts, and struggling to find and use pastels in my stash. I agree that 'mistakes' only show up if everything else is perfect - if things are individual, a more individual block dosen't stand out, just enhances the whole!

I love the look of the nine patches. You can never have too much color and wonky is where I love to be. It's the land of no mistakes.

I absolutely ADORE these blocks!! I have been laboring over a decision as to what "pattern" to make MYSELF a quilt - and vwallah!!! Here it is - it's easy, it's mindless - it's creative and I can take it wherever I go - no fancy stitches/seams necessary. Thanks for the inspiration. It's gorgeous!!!

P.S. Where were you in Florida - I lived in Boca Raton/Delray Beach for almost 20 years!!! Now we're in Carolina.

Oh, so nice! Thanks for showing the rectangle trick. I love the wonky look but also want to be able to put things together without too much trouble, and that's a great way to do it. You may not have lots of sunshine outdoors, but you definitely have it inside!

These are so fun and cute. And what I love most is watching YOU have fun!!!

Lily is a very smart cat. I wonder if she would be my friend? ;)

Your 9-patch blocks are super -- lov all the colours you've used. I've been stitching 9-patch blocks by hand on and off for a few months. They're so satisfying to make sometimes!

I can't get enough of seeing this quilt progress! So energetic.

This is such a happy quilt! Lilly is very regal looking!

really loving the bright colors!!! I had to complete 100 nine-patches recently and i'm still cutting them apart in half lengthwise, matching up (or unmatching), cutting in half horizontally, then matching and sewing again. I'm on that last part.

this is just such a happy quilting trip, i love it.

Full speed ahead! It's a winner.

I love this one, it's so bright and colourful.

I think it's fantastic. Very very you and will look great on those white walls with the sun streaming in (if it ever does again!!!!).

The happy 9-patches are inspiring! As are all you relaxed quilting/piecing ideas. Thank you for encouraging my inner child!

It seems to be unanimous! This quilt is definitely a winner! I love your 9-patches - so bright and happy. It looks like you're on a roll! Whoo hoo!
And Lily knows a good spot when she sees it! My kitties like the ironing board too.