Here's another peek at my quilting on Orphan Train. These two blocks, made in approximately 1995, were samples for a quilt I was making based on one in Patchwork Tsushin magazine. I had fallen hard for it, and sketched out the block - I wish I'd been smart enough to make notes about the values in the blocks, but I didn't. My plan was to make the quilt very scrappy, but I didn't like the way the blocks looked at all. 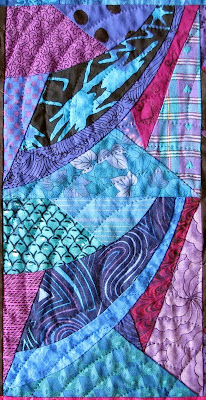 Oh, and I forgot to mention, these were hand-pieced. I used to do quite a bit of that. Anyway, after making these blocks I decided I wanted more continuity between the blocks so these became orphans. You can see a picture of the finished Tsushin quilt way back in my very first blog post. And while you are back in the archives you can read why I called this blog Lazy Gal Quilting.

This reminds me I need to beg my parents to take a really good picture of the Tsushin quilt for me. When I get a great pic I'll post it, but it didn't seem worthwhile to repost that bitty picture.

Check out the vintage blocks that KathieB scored. They are such a cool pattern that I've never seen before - anyone got an idea of what it is? And those of you who are into recycling fabric from clothing should appreciate these as well.

I just haven't been getting much done. Haven't been near the sewing machine in days, although I have gotten a bit more hand quilting done. Maybe more than a bit, it just doesn't feel like much.

Heidi suggested I run another little "class" like the Winter Class. I'm happy to do it (I've already started constructing the class blog), but I'd like some guidance from ya'all. If you're interested in participating, do you want to just do your own thing, or would you want me to give you guidance? Do you want to have another theme or anything goes? I've got an idea for a repetitive letters quilt if you want to try that. Feedback please! You can send email or comment.
Posted by Tonya Ricucci at 4:03 AM

I would very much enjoy another class, Tonya. I would like some guidance and a theme, but chance to do my own thing (if that makes any sense!) The letters quilt sounds great. Count me in!

i like the idea of repetition, sort of a variation on one theme, but maybe an anything goes theme with repetition as the main idea. how's that? i think i could manage to squeeze it in! :-)

So much fun to read your earlier posts! And KathieB's block is a double pinwheel, she just changed the color on one of the large triangles. Very cool looking!

I wanna join, but I haven't finished the first one. IS THAT BAD? 8^)

That Tsushin block is AMAZING. And so is your finished quilt. I would definitely like to see a big photo of that one.

I joined the winter class and then couldn't really figure out where to go with it so I would love to do another "class" but have more direction - I really want to play with letters. thanks

The colour placement in those vintage blocks is an interesting variation.

Thanks for the trip down memory lane. I think another class would be great, even though I'm not even finished with the first one. I actually have another idea to make a little quilt similar to Better Not Pout with some more of Ryan's drawings. He just drew several versions of submarines that I'd love to make into a small quilt over his bed, with words too. However, I feel I drowning under all the WIP's here! I feel the need to put away the crumb blocks for a while and focus on something else.

i would be interested in participating this time around...and loved following along with the winter class blog. Ive never tried this kind of quilting, but it looks like fun. i kinda like the anything goes, with a bit of direction...but since im new to this style of quilting, perhaps more guidance wouldnt hurt :)
keep me posted on what you decide!
cheers~
lisajo

Orphan Train quilting is lookin' good! It sure does add alot to what was already a gorgeous quilt...way to go Ton!