Here's another way to play with letters.

(I know, I know, I said I'd do the lower-case letters next, but I've got cramps on top of cramps and I'm just gonna play. I'll get to the tutorial when I'm more coherent.)

So yes, I started a new project. It looks pretty darn similar to my last one since I'm working with leftover bits and strips. 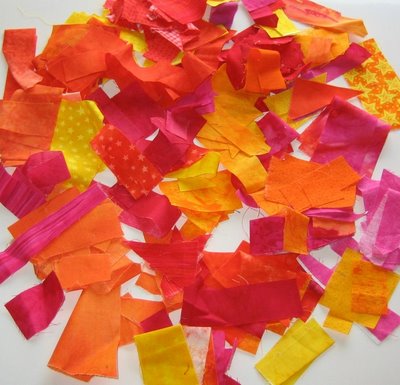 Hubby was not happy to see these colors back up on the design wall. I thought he just didn't care for the Terms quilt, but it's the colors he objects to. I didn't really know that since in the past I never picked these colors up and played with them together. And now I can't seem to stop.

So, the goal of this "exercise" is to make letters, but be totally scrappy about the fabric placement. Okay, I have been known to cheat here and there when I haven't wanted big chunk of red right next to almost-exact-same-but-different chunk of red. So I do throw strips back into the pile and pull out new ones.

Right now I'm repeating one word over and over again. I might decide to change it up and throw in other words. Maybe. Here's the word:

And here's the bunch of letters I made yesterday:

I'm making this in the same way I made Fruit Punch. Just making lots of letters, not worrying much about the size. I say that, but it's not like I'm making any monstrously large blocks. These go from about 2.5" to 3.25".

I've actually made this quilt before, back in 2002 I think. (No picture, or at least not one you can see anything in. Just a big squishy mess.) That one was in monochromatic red/pink/white. I did include my first name, the month, and year in that one.

I was pretty happy with how it turned out. Looks very cotton crazy and yet there is a bit of repeating pattern in there to make it interesting. Some people couldn't figure out what they were looking at even when they were told, but I had a couple of friends who instantly figured it out.

This is actually a good learning project. It's a way to make letters, but they can be completely imperfect since you never even have to tell anyone they're letters at all. Plus you get to practise the easy ones and get one harder one. Start with the L, then the O, the E and finally do the V. (That's right,we're talking about LOVE.) Throw in some hugs and kisses (O and then X - don't worry that the background on that letter would stay consistent instead of scrappy) and there isn't a letter you can't do. I work in batches of about six. Six Ls, then six Os etc.

This would also be a fun way to do someone's name. Or how about a secret message?

Sweetie and I are rewatching Stargate. We started with the movie and are more than halfway through the first season, mainly because we're skipping a lot of the cheesy episodes. And we're more than halfway thru Alias Season 4. I'm so mad at Vaughn at the moment - the idiot. The show is definitely overdosing on the whole "I want to know more about my father/mother" issue. Get over it already.

Posted by Tonya Ricucci at 6:16 AM

What a great exercise Ton! And for you to be doing it again, despite having made so many word quilts...I love it..*G* I really, really want to play along...I was thinking about words with the letter X this morning..Xist, Xit,Xcite, etc. Maybe if I'm really fast on these stars, I can cheat and have some play time..*G*

I'm very Xcited for tonight's CSI, as this season winds down..one more new episode after tonight. Hard to believe it's season 6 ending. I'm guessing you get the Stargate episodes from Netfilx?

OK, these are a bit "interesting"! I think you've crossed that line for me where it is fun but outside my comfort zone to totally mine blowing WHAT! I can see the words, but I think this is just a bit too maverick for me at the moment!!! :)

love these colors...and like the approach. glad to see you playing around. boo hiss on the crampy stomach thing

I do like these colors, especially that top picture - reminds me of Starburst candy after all the green and grape has been picked out... :)

Well I saw the L-O-V-E right away. Like you said, some won't see them at all until told and then they might never see the letters, although the V hints to you that something is amiss.

Maybe if hubby hates these colors you could add some other color in to tone them down like black? Or just let this be another one he's not entirely wild about.

Great job...pictures are so deceiving. I would have thought these were 4 or 5 inches.

I saw Love right away, too. And if you're like me, WHO CARES if hubby likes the colors! hehe..I don't quilt to please him(well, unless I'm making something FOR him, hehe) I'm so looking forward to doing something with your letters. Thinking Christmas gifts and Welcome banners for doors! Thanks again for sharing!

Okay so now I know what you'll do with those leftover Os!!

This is a great idea. Might be a good one for me to get my teeth into as a brand newbie quilter!

And I adore the original Stargate! But Alias always bugged me. I did like all her different wigs and looks though!!

I got a good chuckle when you said some people couldn't figure out what you were spelling even when they were told because... my husband looked at my little strip and could only make out one letter!! You make these word quilts so incrediby fun, I can't help but be drawn to them. I have a feeling they will always find a way into my days. I may have to make some allowances. It's all your fault:)