Woohoo, I got a top finished. This is Jumbo Margarita - not to be confused with the Margarita Quilt which is still in progress - I haven't decided yet on blue or orange for the border. 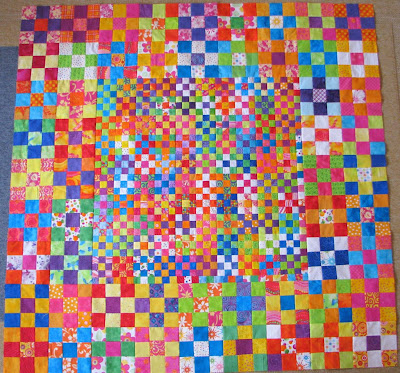 What do you guys think of this? I'm thinking it doesn't need another border, but could be wrong. Sometimes it's hard to get the appropriate distance on your own quilts. Are the proportions good? I could add another row of the big blocks all the way round. Or make a single row of Godzilla blocks all the way.

Jumbo Margarita has a center of 10 x 10 3" Lazy 9-Patch blocks surrounded by a double row of 6" blocks. Theoretically the 6" blocks should have been exactly twice the size of the 3" blocks. That's how math is supposed to work. Not the way I piece.

I added an extra row of squares to the side and bottom of the center to make it larger and amazingly enough that worked exactly. 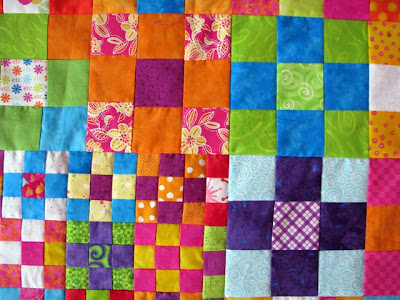 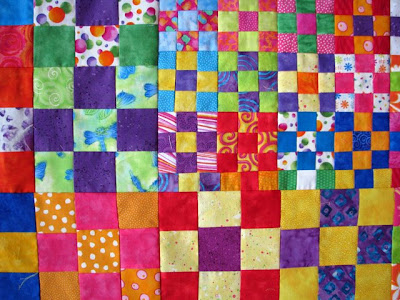 After I got two of the big borders added on I realized that I'd sewn several of the blocks/rows incorrectly. You know how usually you alternate the blocks: one with four dark corners followed by one with four light corners? eh, didn't work. Well, here and there, but not consistently. Good thing I love this style of quilt. If I still bought into the whole precision thing I'd be crying.

No seam ripping for me! When a quilt is this wonky, you can't tell when something is sewed "wrong."

Cats had fun while I was laying down blocks yesterday. Pokey was squirming all over making it difficult to get her in focus. 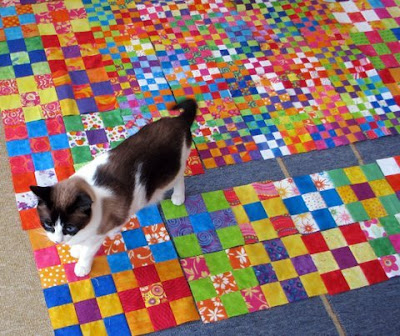 Howler pretty much destroyed the arrangement tearing around on the blocks. He doesn't have the block surfing ability of Siobhan's cat Brownie, who can make the blocks slide for a foot or so. I mean, really gets them moving. Siobhan was having one heck of a time trying to get her quilt together while Brownie was playing. And I was no help whatsover - it was a great show.

My bad knee is still iffy. I know it's feeling better though because I keep forgetting about it and doing stupid things like bending it. I'm going to take it easy now after all the sewing of the last two days and go back to hand quilting.

I have to admit to a couple of guilty pleasures. I've been netflixing Gordon Ramsey's Hell's Kitchen Season 1. He's such an incredible jerk, but entertaining nonetheless. My favorite contestant got the boot from the final four but I'm looking forward to seeing who won.

Okay, the other guilty pleasure is South Park. yes, you read that right. My cable company has been airing it with an english language option (woohoo) and it comes on right before The Daily Show (which amazingly enough is just subtitled) so I've sorta gotten sucked in. I've actually been enjoying it - cringing with embarassment.

Meanwhile I've heard about how season 3 of Bones ended. My favorite character turns out to be a serial killer? That is wrong on so many levels. I wasn't all that happy with season 2 of the show, and didn't care for the direction it went. Well, Bones just went right over the cliff. I'm not watching any of season 3 and now I don't even know how much I want to watch the earlier episodes either.

Posted by Tonya Ricucci at 5:49 AM

Email ThisBlogThis!Share to TwitterShare to FacebookShare to Pinterest
Labels: Cats, my quilts, tv

I love this quilt! Your colors are fantastic, this looks like Summer to me all the way. I love the Margarita Quilt too.
I guess the only thing I would have done differently would have been to make a narrow blue inner border to delineate between the big blocks and the little ones. Guess I'm still not a very Liberated Quilter! oh, well, one day...

Wow!!! I LOVE it--and it doesn't need a thing!!! It's fabulous as is (at least I think so). Adding the extra pieces so the larger blocks fit around the center is inspired--Gwen would be proud of you. If you want it to be bigger, then adding another round of the large blocks would do that, w/out changing this great quilt...but I'd never put a border on it.

Why do I love these bright colours when I see them on someone else's blog, but get scared when I try it myself? I wouldn't put a border on, but some of that bright blue as a binding would look terrific I think. Lovely cats. Rosie, the laziest cat in the world, loves to come and just sit on whatever I'm doing - and sit, and sit and refuse to budge.

I love your quilt, cheerful and vibrant. How about just adding an orange binding?

I am getting drunk on all those bright colours! it is amazing!

It is great the way it is. I'm thinking a solid binding will finish it nicely. Thanks for sharing it. I was wondering how it was coming. Those little squares are crazy making, but addicting, eh? (that the Canadian content for you.)

I wouldn't change a thing! I vote for blue binding :)

I like it the way it is - with a solid blue binding.
Kris

It's a stunning top, Ton. I wouldn't trouble it with borders..too confining. Why stop the explosion of color. I'd probably binding in a assorted strips of the same colors, changing as they go...no matching.
Hugs, Finn
P.S. I "fixed" the post about linking..thanks!

I love how this quilt top is turning out! Like Finn I wonder if a border will confine it too much... If you want it bigger I'd experiement with piano keys in the colours already used -- just extending the bright in a slightly different shape then the squares....

I love seeing the kitty antics, and the top turned out FABULOUS! Definately send it when you feel like it. I can store it here and then bring it to you when you are stateside again! Yeah! Hand delivery! :c)

I don't think the quilt needs a thing except perhaps you standing next to it with a celebratory margarita in your hand!

Thanks for the heads up on Bones. I got annoyed at it a while back, but I definitely won't give it a second try now. Have you ever seen Burn Notice? We just started watching season 1 so we'd be caught up when season 2 begins in July. Good show.

I am new to reading your blog, I love this quilt-very colorful, bright, and I love the name of it too.
It really does not need a border, but if I were to add one, I think I would add a very narrow one with one of the darker colors
Kathyinozarks

I love it! This is such a happy quilt. Fun seeing all your kitties. I can't watch Gordon Ramsey's Hell's Kitchen. The man makes me so mad. I know it's just a show but if I were cooking I'd throw a frying pan at him.

Just perfect as it is (and in my book precision doesn't necessarily equate to perfection).

My vote for the Margarita Quiltis to combine blue and orange in the borders (narrow orange inner, wider blue outer)...

Jumbo Margarita is AWESOME just the way it is, nothing more than a skinny blue binding needed. It's WOW-WOW-WOW!!

Great kitty pics ~ Angel likes to reach up and pull her paws on the lower part of my design wall so I'm used to finding stray blocks on the floor. Good thing we love the furry trouble makers!

I wouldn't change a thing! It made me smile--I've been stuck in a basement office all day and needed something cheery. It is lovely, and if you ever tire of it,I will send you my address...

Not a thing wrong with liking South Park!! I have almost every season on DVD and love to watch them just about every time they come on. Never cringe...it hilarious!

Your quilt looks perfect the way it. I love your color choices. Fun and fabulous

I hadn't heard about (or seen) the season finale of Bones. I'm heartbroken! I second the recommendation for Burn Notice. The Closer is good too.

I love the pic of Howler and Habibi on the 9-patch blocks. The contrast between their coats and the busy blocks I guess. I have no suggestions for the quilt itself though. Whatever you do it will be great!

I love this quilt top!! What bright colors and what a happy mood! It knocks my socks off! I don't think it needs a border, but I agree with Nancy that if you want it bigger, add more of the blocks. And adding the spacer strips is just the perfect solution. Wow! And love the kitty pics. Your kitties are so pretty.

I agree with the majority, I love the quilt just as it is! It's so exciting! I think the bright blue binding, no borders. And I too would be willing to store it for you or take it off your hands completely. :-)

It's perfect just the way it is, no borders. And a few 4 darks next to 4 darks just give it a little personality of its own.

Ooooh! I love it just like that. No border needed. I love that extra strip of smaller squares. I didn't even notice it until you pointed it out.

Gorgeous, gorgeous, gorgeous. I don't like to get involved in group design, so I'll trust your own judgment on this one. I think after a rest you'll know what to do with it.

Sensational. Very summery and beachy. I love it! Please send it to me. (Oh well, it was worth a try...) LOL

It sparkles! Reminds me of the ocean on a really sunny day. Nice!

It looks done to me too. Blue binding would probably look great, but I keep thinking that it needs something with a lot of white -- for the salt around the rim of the glass, of course.

I've not watched Bones, but we are starting Season 3 of Battlestar Galactica now and loving it. I'll be slowly making my way through SG-1 too.

On a grey miserable day with no sign of it letting up, that is just whazt I need! Tonya, it's stunning. No border, perhaps a small binding. I think it is 100% perfection as it is.

Oh Tonya! I LOVE it! I say no borders and no extra 9patches. Oh man I just love this! And I am a huge fan of Hell's Kitchen. He is a jerk on the show but I have a feeling some of it is for the show. But I love watching some of those people on there.

I have been watching this progress for a while and I love how it's turned out.

Your quilt looks like a party.....I can almost taste the chips, salsa and of course margaritas! I agree with the no border.

It's too bad that you've given up on Bones - this last season was quite a rollercoaster, but surprising finale notwithstanding, it was good enough for me to record and re-watch all of the episodes. I'll definitely be watching next year's season premiere to see if they pull (another) rabbit out of their hat!

LOVE the Jumbo Margarita - so happy! I'm not sure if my active meditation skills are advanced enough to do so many 9p's, but I can sure appreciate your commitment!

Gorgeous. I love your cats.... your patch,

live in Paris must be plaisant.j 'lives in suburb in yvelines.