Paris has some amazing scaffolding. I previously showed you the melting building, well here is the giant bar of chocolate: 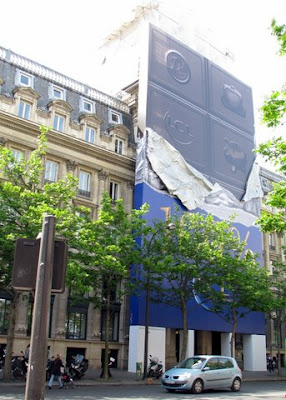 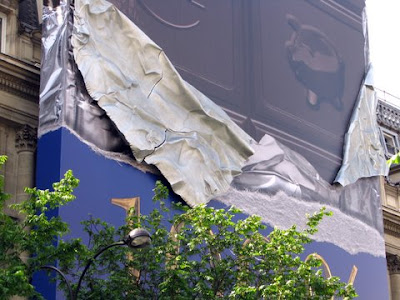 I haven't taken a walk in awhile - too many gray skies combined with sheer laziness. I have been hand quilting. Perhaps too much - the middle knuckle on my thimble finger has ached for a couple of weeks. Feels like I jammed it somehow, but I don't remember ever doing that. Please don't let this be arthritis.

Didn't get nearly enough sleep last night. First the monsters upstairs were still jumping around making noise at 11:00pm and then Habibi attacked my sweetie's foot at 5:00am. After that yelp of pain (wouldn't be fair to call it a shriek) I was too awake to sleep but too tired to do anything more exerting than Sudoku.

Onto a completely different topic. I rarely used to respond to comments, then started feeling guilty because so many bloggers were doing so that I then started at least attempting to reply to them all. It's hard because I rarely have anything to say other than "thank you" or an agreement of some kind. Sigh. I'm boring that way. Plus I'm a terrible correspondent in general - I have a huge queue of emails I'm late answering... So I'm going back to the rarely responding to comments thing. Let me just say in advance I adore you all, I read all your comments and I appreciate them. But unless you're asking a question you probably won't hear back from me.

By the way fellow bloggers, feel free to not respond to my comments either. It's usually unnecessary - I just wanted to let you know I was thinking of you.
Posted by Tonya Ricucci at 5:47 AM

Email ThisBlogThis!Share to TwitterShare to FacebookShare to Pinterest
Labels: Paris

Love that chocolate bar! It's so easy to make things look good, wish we would do more of that here. I understand the comments thing -- it's hard to respond to everyone every time, and often people just want you to know they are enjoying what you're doing.

I think responding to comments is sort of like leaving a comment on a blog -- optional... Somewhere in hte day I need to get away from the computer and actually sew :-)

That chocolate bar just makes me hungry...no need to respond to that!

Hope your thumb gets better.

Yep... I agree with you re not commenting on every comment... sometimes it just fills the space without adding much.

I really, really enjoy your blog -- you give us some wonderful visual images of Paris, plus your quilting journey, plus snippets of home life. *sigh*... thanks for sharing...

It's funny but I can't tell you what makes me respond to a specific comment - I don't respond to them all.

I also used to feel guilty about not responding to questions when there wasn't an email address now I don't worry about it - no email address - no answer. I used to go look up the persons blog and leave a comment on their blog with an answer but it's just too time consuming.

I see a lot of people just leave a fairly general thank you in their own comment section and answer any questions there too. I have been contemplating that. You have a very popular blog and have a lot of comments all of the time so I can definitely agree with you.
I love your pictures of Paris and your quilts.

yep yep yep
You do what you can and don't sweat the rest. I hope the finger comes back!!

Try putting some ice on your finger when it hurts. Just for about 15 minutes. It might help. Hope it feels better soon. Oh, and resting it a few days wouldn't hurt anything. I find that both of these tricks help my hands when I've over-used them. It could just be over-use, not arthritis, if you've been doing a lot of quilting.
(says "Dr. Mom" with a smile)

The chocolate bar is amazing!

The cobble stone ? wall just BEGS to be a quilting pattern! I'm keeping this as NEW so I can study and enjoy it more.

I know you probably have already, but how about trying arnica on the finger?

Neat Chocolate bar...very creative of them to hide the scaffolding that way.
I know what you mean about the replies to comments...90% of the time I just nod my head at the computer and then hit delete..don't worry about it. :o)

Thank you for the photo of the Chocolate Bar, now that is my kind of size!!! Yum, it's making me hungry...

love the chocolate bar. I too don't respond to a comment on my post other that publishing it. If there's a question then I answer it, and I comment on others' blogs, but that's about it. Can't wait to see what you do with all the new plaids.

Now that I've been at this awhile myself I'm finding that I'm not commenting as often as I travel my regular blogs. Doesn't mean I'm not visiting or that I don't care; I just don't feel as compelled to respond as I once did. Interesting.

Love the chocolate bar -- and I have to agree that I'm never sure how much/when to answer some of the comments. I do try to respond if it seems necessary -- but, um, sometimes I'm not sure if it is :0).

LOVE the new fabrics -- and I actually am kind of fascinated by how the colors change on the white vs. green background!

that scaffolding is hilarious! I've never been bothered by your comment policy to each her own and frankly you respond well to OMG my inlaws are in the hospital in paris help! So you know i'm good.