Here's a close-up of Frankenstein's Monster from Happy Howloween. 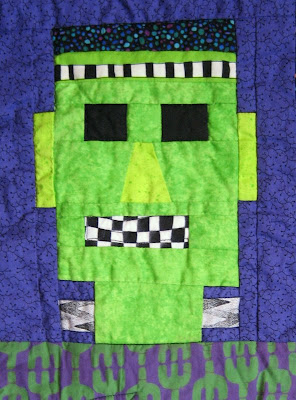 I've shown you the free-piecing basics - that's all you need to know to sew a face yourself. I've drawn it out for you here so that you can see all the seams, although I forgot to give this Frankie some hair. Depending on whose face you're piecing, you might want to skip the scar across the forehead and the neckbolts... heh heh heh. 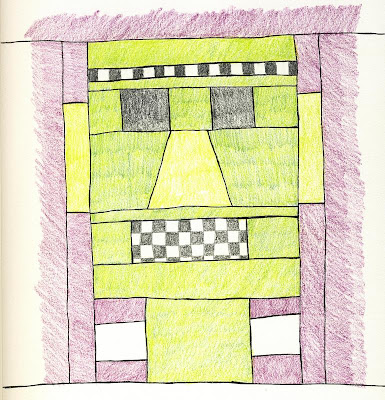 Figure out how I pieced this together. The shortest seams were sewn first, the longest were last.

I thought of a way to kill two birds with one stone. I'm going to show you the way I put this together AND show you a way to play with improvisation without using up any fabric.

First I gathered some construction paper, paper-cutting rotary cutter (I have two rotary cutters, this one has an old blade in it that doesn't work well enough on fabric anymore), scissors, ruler, and tape. 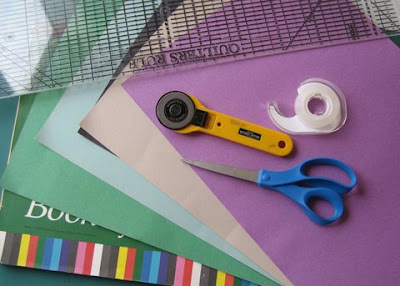 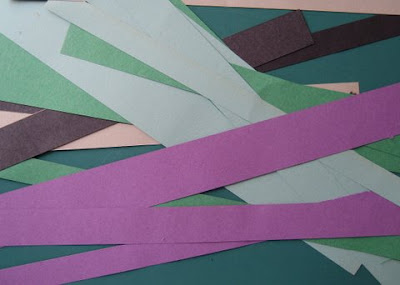 I started Frankie with the eyes. I cut two rectangles for eyes and sewed them into some face fabric. I'm going to describe how I SEWED Frankie, even though the example is paper. Is that okay? When playing with paper, I obviously used tape instead of stitches.

Now if I were doing a more refined face, I probably would have put long triangles on the corners of the eyes in order to get an almost shape. (Or triangles onto squares to get circles.)

The next step was to cut out a nose shape. I inserted it into a wide strip of face fabric, leaving plenty of extra strip on either side of the nose: I then sewed them together.

and lopped off the extra tails. Okay need a bit of face material for under the nose, so sew it on and trim off the excess. And better insert a mouth into a strip of face material. I deliberately used a leftover bit of face paper on the left side of the mouth - gives this guy a quirky look. 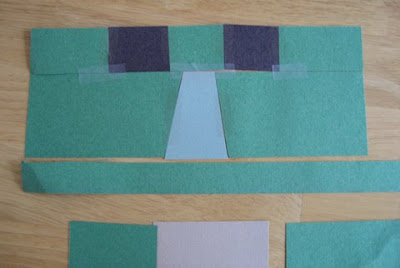 See, this face is built in rows. Just sew on, and trim the exra over and over again. 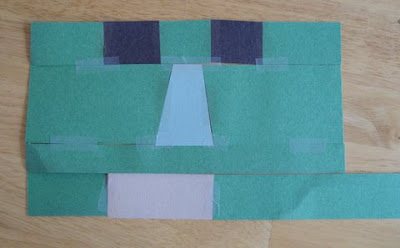 I left out the scar and put hair on my paper Frankie. I didn't like how fat his face was looking so I lopped off both sides. I do the same thing when I'm working with fabric. Adjust as needed. 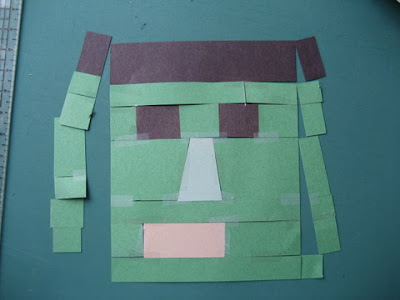 Here's a look at how I did the neck bolts. I had to sew them onto the neck before the entire thing could be attached to the face. I realized my neck wasn't going to be thick enough and just "sewed" on some more: 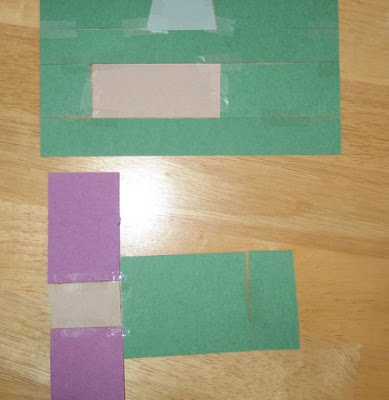 The ears are attached vertically. I liked Frankie with a crew cut, but if you wanted to have hair falling down the side of the face, you could use the hair material instead of the background fabric above the ear. 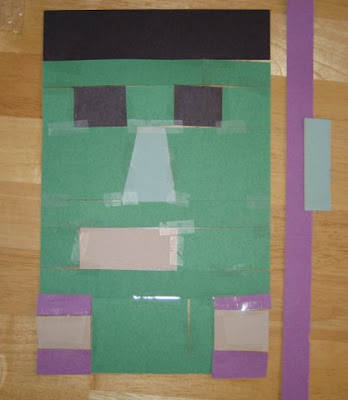 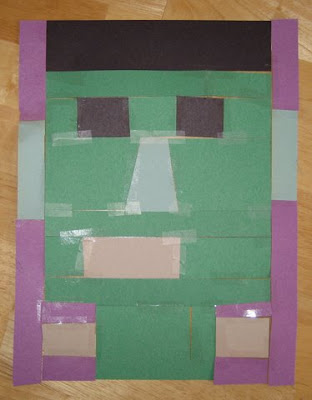 You can work out all sorts of ideas using paper. Give it a try.
Posted by Tonya Ricucci at 6:35 AM

Email ThisBlogThis!Share to TwitterShare to FacebookShare to Pinterest
Labels: my quilts, teaching

You're so clever! You may be on to something with this paper tutorial thang. :-)

This is slick. I like this idea!
I might have Thing One try this out today, too....she's usually up for an artsy kind of project.

great tips, always teaching me things...been working on the machine in the background...something to see soon...

You're so awesome.
These tutorials are great.
I've made 6 wonky halloween houses and an asterisk spider. Next I'm going to work on the letters.

this is a great tutorial Tonya! Wonderful idea to use paper and tape -- gives me ideas for designing my own thoughts....

Yup, the paper and tape work fine. Enjoying your creating and teaching.